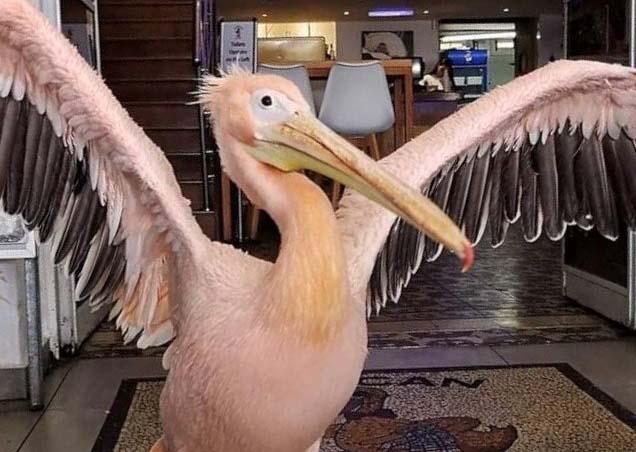 Friday was the first day on the job for the new Kokos pelican at the Pelican Restaurant in Paphos, having trained alongside his late colleague – Kokos.

Last month, the veteran pelican – also named Kokos – died aged 25 but not before training the more junior Kokos in the fine art of the hospitality industry.

“He’s very polite and he’s ready and waiting to welcome people to the restaurant – a very well-mannered pelican,” Andros Papiris, owner of the restaurant, told the Cyprus Mail on Friday.

The Kokos lineage is difficult to trace as it stretches back to 1967, as according to the lore of the restaurant a pelican washed ashore and was carried by fishermen to a nearby café – then known as Aphrodite.

It was two years later, in 1969, that the café/restaurant which had opened in 1957 as Aphrodite was renamed the Pelican Restaurant.

Since then, a series of feathered friends have lived through the history surrounding the Paphos harbour and have welcomed visitors for generations.

The 25-year-old pelican who passed away last month arrived in Cyprus in 2004 and is claimed to have been the most photographed bird on the island.

Kokos ‘Senior’ also hit the headlines in a 2016 scandal, after a female model from Russia was seen taking nude photos with the bird at the harbour.

In March 2020, just a few days before the pandemic took hold, a German TV station arrived in Kato Paphos to film a documentary about the pelican of Kato Paphos, said Papiris.

Now the spotlight will fall on the younger Kokos to continue the long tradition being the unofficial mascot of the Paphos port.