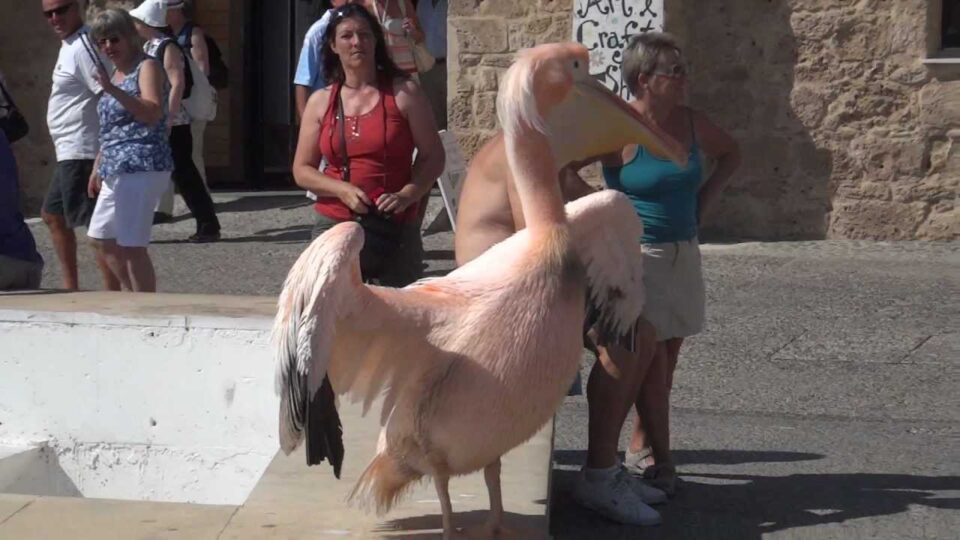 Cyprus’ best known and most photographed bird, ‘Kokos’ the pelican, has died at the ripe old age of 25.

Found at the Pelican restaurant in Kato Paphos alongside his friend, a ten-year pelican also called Kokos, he died on Tuesday in his sleep, the venue’s general manager informed the Cyprus Mail.

“Kokos lived a good and long life and he was old. His death was expected as his sight was going, he just went to sleep. We are very sad and the younger Kokos is too, so we are keeping his spirits up by feeding him, keeping him company and looking after him,” said George Theodorou.

Kokos, (Coco to locals) arrived in Cyprus in 2004 and entertained thousands of visitors from Cyprus and abroad over the years. He enjoyed fame all over the world as the most photographed bird in Cyprus, Theodorou said.

Kokos also appeared on TV in many countries including on the BBC, German TV, channels in France, Denmark and even Brazil.

Kokos featured on numerous postcards, and hundreds of photos and videos of the pelican have also been shared online.

During the pandemic he was isolated in special facilities at the home of Andros Papiris, the restaurant owner, that were created to ensure that he would be comfortable. The pelican was often spotted taking baths in Papiris’ swimming pool.

The Pelican restaurant is due to open its outdoor areas on Friday for the first time since closing during last year’s lockdown, but without its most popular mascot.

“It would be a great day for Coco himself, as he was a surprisingly social bird. He understood and enjoyed the interest of customers and visitors to the port and posed for photos,” Theodorou said.

Kokos also hit the headlines in a 2016 scandal, after a female model from Russia was seen taking nude photos with the bird at the harbour.

In March 2020, just a few days before the pandemic took hold, a German TV station arrived in Kato Paphos to film a documentary about the pelican of Kato Paphos, said Papiris.

Now the spotlight will fall on the younger Kokos to continue the long tradition of a pelican at Paphos port.

Papiris is hoping to bring a second pelican to keep the remaining bird company, but it will be challenging due to the pandemic restrictions, said Theodorou.

“Pelicans come from Africa and even in usual circumstances, it requires a lot of paperwork and costs – between eight to ten thousand euros – to bring one here,” he said.

They are also costly creatures to keep as each eats around a kilo of red mullet a day.

The restaurant has been in the same family since 1957 and the ‘first Kokos’ made an appearance in 1969, the general manager said. The original bird arrived exhausted and ‘Grandpa Coco,” was nursed back to health, he never left. He was killed in 1972 when he was hit by a bus.

“I’m not sure how many pelicans there have been in the years since, but it is a tradition that will continue,” he said.