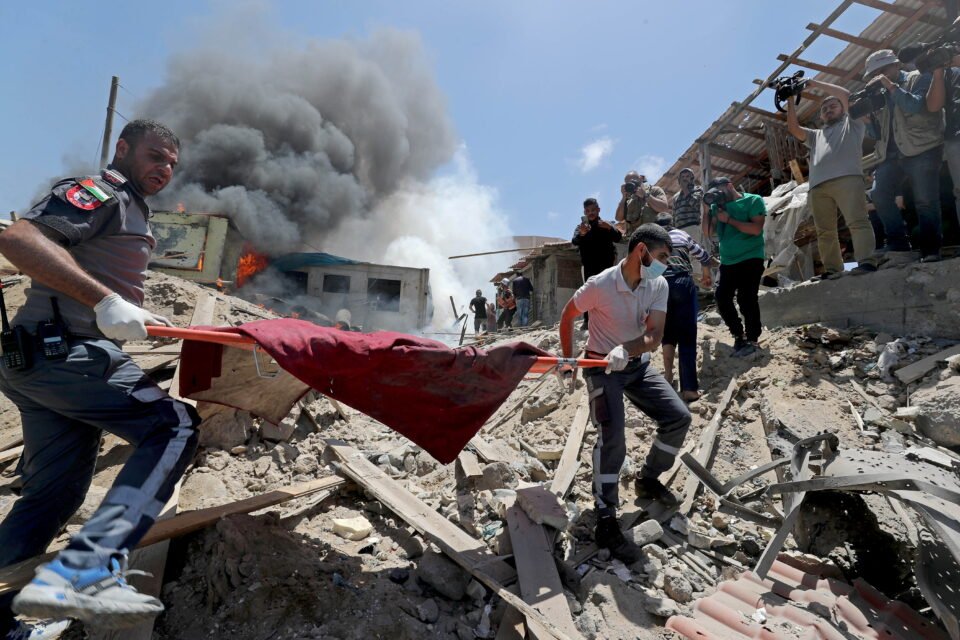 Palestinians evacuate a body from the site of Israeli strikes in Gaza City May 17, 2021. REUTERS/Mohammed Salem

As the fiercest hostilities in the region in years entered a second week, U.S. Secretary of State Antony Blinken urged all sides to protect civilians, while Washington, Egypt and U.N. mediators stepped up efforts to end the fighting.

Gaza health officials put the Palestinian death toll since the hostilities flared last week at 201, including 58 children and 34 women. Ten people have been killed in Israel, including two children.

Police said an Israeli man also died in hospital on Monday after being attacked last week by Arab rioters as clashes broke out in mixed Jewish-Arab communities in Israel, a new front of violence that has been ignited by the Gaza fighting.

The killing of Hussam Abu Harbeed, Islamic Jihad’s armed commander for north Gaza, was likely to draw a fierce response from the militant group that is fighting alongside Hamas, the Islamist movement that governs the coastal enclave.

The Israeli military said in a statement that Harbeed had been “behind several anti-tank missile terror attacks against Israeli civilians”, and an Israeli general said his country could carry on the fight “forever”.

Militant groups in Gaza also gave no sign that an end to fighting was imminent. Soon after Harbeed’s death, Islamic Jihad fired rockets at the Israeli coastal city of Ashdod, and medics said seven people had been injured.

At least seven Palestinians were killed in Israeli strikes on Gaza on Monday by early evening, including two that died in a missile attack on a seven-storey office building in Gaza City, medics said. The intensity of Israeli strikes has tended to increase after dark.

“My children couldn’t sleep all night even after the wave of intensive bombing stopped,” said Umm Naeem, 50, a mother of five, as she shopped for bread in Gaza City.

“We have to continue the war until there is long-term ceasefire – (one) that is not temporary,” Osher Bugam, a resident of the Israel coastal city of Ashkelon, said after a rocket fired from Gaza hit a synagogue there.

On the edge of Gaza’s Jabalya refugee camp, firefighters tried to put out fires caused by an Israeli artillery shell to a sponge factory. Vast clouds of smoke filled the skies.

Workers cleared debris from wrecked buildings from the streets and tried to repair damaged telephone and electricity lines. People also searched through the rubble of ruined buildings to retrieve belongings.

Hamas began its rocket assault last Monday after weeks of tensions over a court case to evict several Palestinian families in East Jerusalem, and in retaliation for Israeli police clashes with Palestinians near the city’s al-Aqsa Mosque, Islam’s third holiest site, during the Muslim holy month of Ramadan.

Palestinians have also become frustrated by setbacks to their aspirations for an independent state and an end to Israeli occupation in recent years.

World concern deepened after an Israeli air strike in Gaza that destroyed several homes on Sunday and which Palestinian health officials said killed 42 people, including 10 children, and persistent rocket attacks on Israeli towns.

U.S. envoy Hady Amr, appointed by President Joe Biden last week, met Palestinian President Mahmoud Abbas in the West Bank city of Ramallah on Monday, and Blinken said U.S. officials had been “working around the clock” to bring an end to the conflict.

“The United States remains greatly concerned by the escalating violence. Hundreds of people killed or injured, including children being pulled from the rubble,” he said after talks with Denmark’s foreign minister in Copenhagen.

German Chancellor Angela Merkel urged an end to the fighting in a call with Prime Minister Benjamin Netanyahu on Monday, a German government spokesman said, and France and Egypt said they would continue efforts for a ceasefire.

The United States said on Sunday it had made clear it was ready to offer support “should the parties seek a ceasefire”.

But while the devastation in Gaza was likely to make it harder for Israel to expand its ties with Arab countries, Gulf states that invested in opening ties with Israel last year are showing no public sign of second thoughts.

Brigadier General Yaron Rosen, a former Israeli air division commander, gave no indication on Monday there would be a let-up in attacks in what he called a “war of attrition”.

“The IDF (Israeli military) can go with this forever. And they (Hamas) can go on with their rockets, sadly, also for a very long time. But the price they are paying is rising higher and higher,” he told reporters.

The Israeli military said at least 130 Palestinian combatants had been killed since fighting began. Harbeed had been a commander with Islamic Jihad for 15 years and was behind an attack on the first day of hostilities last week, it said.

The Israeli military said Hamas, a group regarded by Israel, the United States and the European Union as a terrorist movement, and other armed factions had fired about 3,150 rockets from Gaza over the past week. Israel’s missile defence system intercepted most of them, it said.

The unrest in Israel’s mixed Jewish and Arab towns opened a new front in the conflict, with the Israeli president warning of civil war between Israel’s Jewish majority and 21% Arab minority.

General strikes against the Gaza fighting were planned for Tuesday in Palestinian towns in the West Bank and Arab towns within Israel.