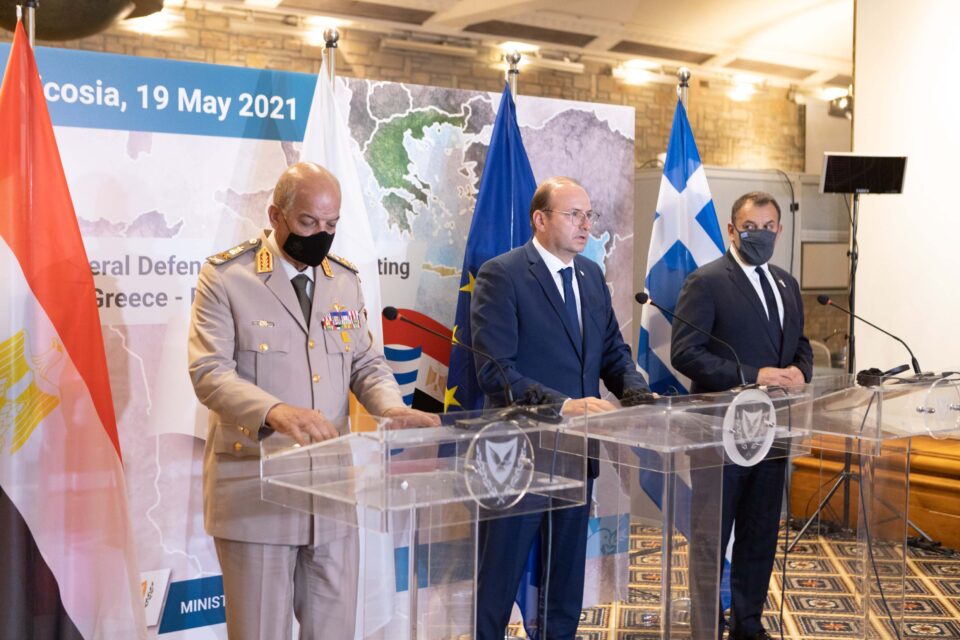 From left, the defence ministers of Egypt, Cyprus and Greece

The defence ministers of Cyprus, Greece and Egypt met in Nicosia on Wednesday to further strengthen military ties.

In their joint statement following the 4th trilateral defence ministers΄ meeting, the three ministers Charalambos Petrides, Nikolaos Panagiotopoulos, and General Mohamed Zaki, condemned actions that violate sovereign rights and reviewed the latest developments and the progress achieved in the field of defence and security.

They stressed their joint determination to further enhance their defence and military cooperation in order to promote peace, stability and prosperity in the Eastern Mediterranean region.
The three countries are currently conducting frequent joint military exercises including Air Force, Naval and Special Forces drills.
They also discussed the possible participation of other countries in exercises taking place within the framework of the trilateral partnership.

The Ministers agreed to hold the next trilateral defence ministers’ meeting in Egypt in 2022.
Petrides said he had the opportunity to brief his counterparts on Turkey`s illegal actions in Cyprus` Exclusive Economic Zone, in the fenced off area of Varosha, as well as Ankara`s demands for a solution to the Cyprus problem that falls outside UN resolutions.

Nicosia bike lanes project to be completed in October