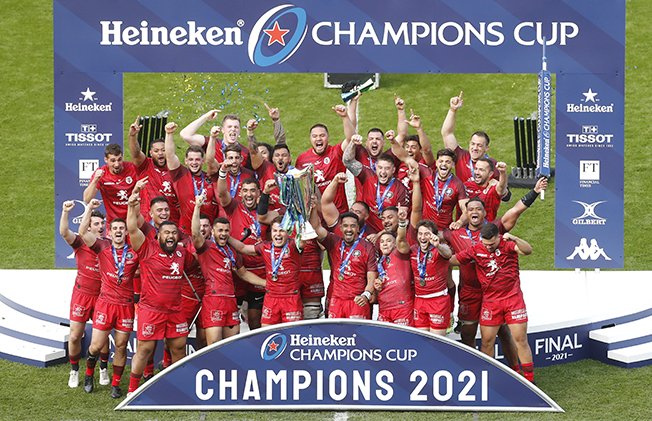 Toulouse won the European Champions Cup against 14-man La Rochelle in front of 10,000 fans at Twickenham

oulouse broke fellow French club La Rochelle’s resilience to claim a record-extending fifth Champions Cup title with a 22-17 victory after their opponents played more than half of the game with 14 men at Twickenham on Saturday.

Juan Cruz Mallia, standing in at centre for the injured Zack Holmes, scored the decisive try on the hour after La Rochelle had mounted a fierce challenge despite the sending off of Levani Botia for a dangerous tackle in their first final appearance.

It is Toulouse’s first Champions Cup title since 2010, which completes a French double after Montpellier beat Leicester Tigers in the Challenge Cup final on Friday.

“It is huge for Toulouse, for the city and all our fans. We made them proud. The first half was tricky, three points here and there, but the second half was better and made it a nice final,” said winger Matthis Lebel.

La Rochelle captain Romain Sazy, like most of his team mates, was left in tears after what was only his side’s 19th European game.

“I’m frustrated. It’s a big failure and losing this way is hard to swallow. We stuck together after the red card. But it’s hard to end the campaign like this,” he said.

Ntamack and West traded penalties as the game quickly turned into a forwards battle that did little to please the 10,000 fans at Twickenham, which was hosting a crowd for the first time this year due to the COVID-19 pandemic.

Botia was shown a yellow card for a high tackle on Maxime Medard but it turned red after referee Luke Pearce consulted with the video assistant.

La Rochelle still managed to move three points up thanks to another West penalty after Rynhardt Elstadt was sin-binned, which left both teams with 14 men until the interval.

In a game riddled with ill discipline, Ntamack levelled with another penalty, only for West to add another three points on the stroke of halftime.

Cheslin Kolbe was denied a try early in the second half by a last-gasp Geoffrey Doumayrou tackle before Ntamack’s fourth penalty put Toulouse level on 12-12.

Toulouse finally pierced their opponents’ defence when Mallia took a bee line for the first try after being set up by Selevasio Tolofua.

Ntamack added another penalty in a flawless kicking performance and gave his team a 10-point advantage with 10 minutes left, giving La Rochelle little hope of a comeback.

But scrumhalf Kerr-Barlow cleverly dived from a maul to reduce the gap to five points, only for West’s conversion attempt to hit the post, the flyhalf having missed eight points with his boot.