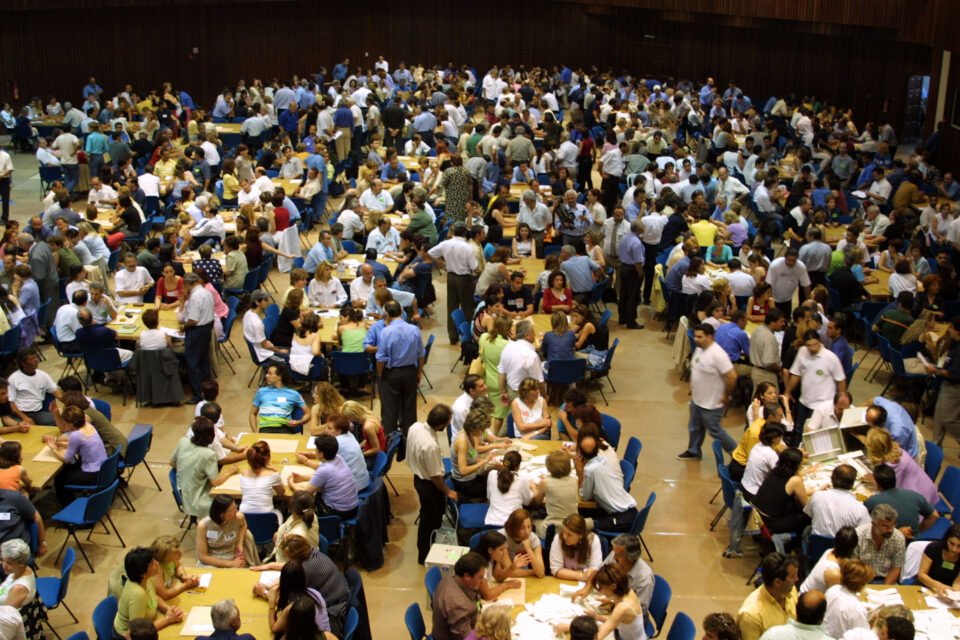 The election count of days gone by. It will look very different this year

The parliamentary elections at the end of this month will be a different affair this time, as the Covid pandemic has imposed many hindrances, primarily on campaigning, but also on the actual voting process, which officials say would be the most difficult to date.

Masks, antiseptic, plexiglass, physical distancing, and a host of health and safety protocols will be the order of the day, as the pandemic may have hindered campaigning, but it will not stop voters from exercising their “sacred right” even if they suffer from the virus or are considered close contacts.

“We all realise that these elections are taking place in unprecedented conditions; never in the past did we have something similar,” chief returning officer Costas Constantinou told the state broadcaster, CyBC.

Constantinou said the government has made available all necessary resources to tackle the difficult endeavour, expecting that issues will emerge during the course.

The chief returning officer said the process was in its final leg, with district returning officers receiving their final instructions while training seminars were underway for the poll station officers and staff.

Parties have also been briefed of the particularities of the poll and the protocols that must be followed.

“I think everything is on course and wherever there are any issues we will tackle them in the best way possible,” Constantinou said.

One issue, which raised eyebrows when it emerged, was the decision to allow people with Covid to vote through a special procedure.

This basically involves mobile ballot boxes taken to the homes of the patients who expressed interest in voting by registering on a special roll. The roll opened on May 17 and will be available until May 28.

Not much interest has been expressed so far; Constantinou said no one had registered by Wednesday.

“You understand that someone who is informed about this health condition, and knowing they have another 10 days ahead, I don’t think their priority is to register, he said.

The ministry had nevertheless prepared for the worst-case scenario. Initially, when the daily case number was around 500, the ministry made plans for around 70 per cent showing interest. That meant around 200 mobile units.

The daily cases have since dropped to double digits so it remains to be seen how many would register by the deadline and how many human and other resources would be needed.

“Will these people be interested? Irrespective of being able to do so or not, what would their mental state be? What would their health condition be? Constantinou said.

The ministry has issued a strict protocol for such cases.

Staff at polling stations, mobile or not, have been given priority to vaccinate. Those who declined, would have to present a negative rapid test done the previous day.

They must all wear masks and keep verbal communication with voters at a minimum.

In mobile units, food and drink should not be consumed in the car. Staffers should keep a four-metre distance from voters unless absolutely necessary.

They must also avoid use of elevators if the voter lives in an apartment building.

When there, they must place the ballot close to the door and retreat at least two metres. They then ask the voter to come out, mask on, place their ID card on the ballot, and then move back.

The head of the crew verifies the identity without touching the card. If verification necessitates removal of the mask, that must be done swiftly.

Following verification, the crew places on the ballot, a pen, a ballot paper, a vote confirmation form, and the box where the forms will be placed, and retreats two metres.

The voter must fill the form and place it in the box and then vote. They then move back, taking the pen with them.

The crew must then disinfect the ballot surfaces and the confirmation box before carrying them back into the vehicle.

They then disinfect and put on fresh masks, discarding the used equipment in a plastic bag that is then sealed shut.

According to the protocol, the votes should be counted outside or in a well-ventilated room. The crew will wear N95 or FFP2 masks and use disposable gloves when handing the ballot papers. There will be no eating and drinking and after finishing, all surfaces must be disinfected.

The room should not be used for at least 72 hours. If it must be used, a special crew must be brought in to disinfect it.

A similar method will be used, if necessary, for people being treated in hospital for Covid.

The ballot box will be carried into the Covid clinic by a special crew donning the necessary personal protective equipment (PPE).

The procedure will be the same as with the home ballot. After finishing, the crew will disinfect the ballot, remove its PPE and exit the room. The procedure is repeated for every patient.

The ballot box is then handed over to a second crew waiting outside, which will transport it to the counting station.

People considered close contacts will also be allowed to go and vote, despite current protocols saying they need to quarantine.

Constantinou said with the health and safety protocols in place on the day of the election effectively “everyone is considered a close contact.”

So close contacts would be able to get out of the house “to exercise the sacred right of voting” he said.

Voters do not have to show a test to enter a station, but if they are not wearing a mask for any reason, they will not be allowed in.

Anyone who makes a fuss will be dealt with by the police. Masks with political insignia or slogans are also banned.

The health and safety measures will inevitably cause some delay, certainly when it comes to the results.

Constantinou said they did not expect to have to grant an extension in voting hours, but a delay should be expected in the count.

There were also the mobile units, which may need to be transported to and from districts. He said they expected a flow of results to start by 7pm and a clear picture of the outcome – as regards parties — an hour or so later.

What will certainly be late are the individual candidate results, mainly because of their large number. Those results could come late on Sunday or early Monday morning.

The alarming rise of Elam must be stopped

How the Hyperloop may disrupt more than travel