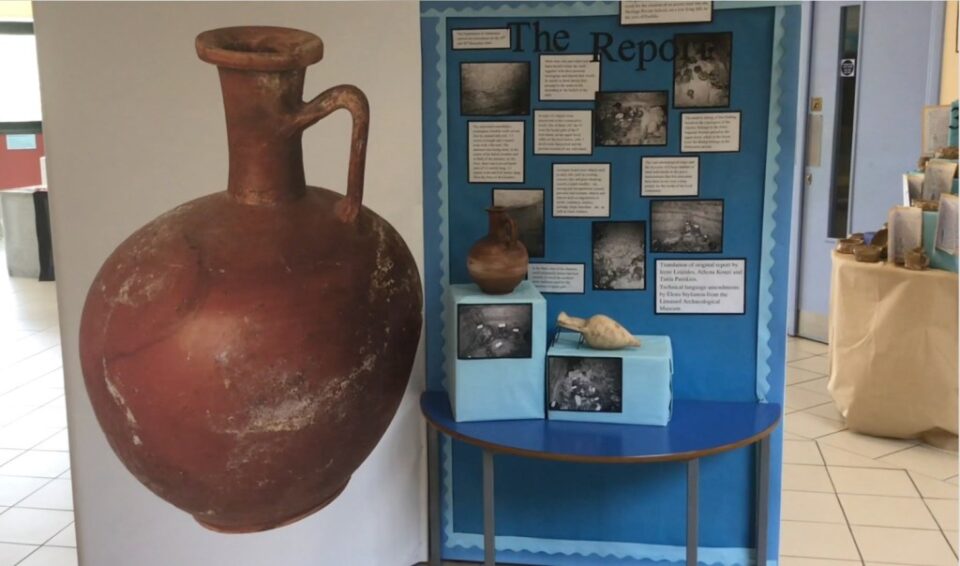 Exhibition at the school

Heritage Private School in Limassol is hosting an archaeological exhibition with artefacts found at its premises and accompanied by students’ handmade replicas, as part of the teachers’ experiential learning approach.

Students as young as six to early high-school students had the opportunity for a hands-on learning experience of the Roman (58BC – 330AD) and Hellenistic (325BC – 58BC) period through the archaeological finds during the school’s construction.

The children wrote reports, diaries and even made clay pots with the contribution of a nearby pottery factory of Nicos Katelaris after studying the original artefacts. Their work is currently exhibited, alongside some of the artefacts found 17 years ago on the ground floor of the Heritage primary school.

The initiative has been described as “a lesson of true, live history”, by the Limassol-based private school’s headmaster Dr Kypros Kouris who thanked the teachers behind the project; primary school teacher Anna Butcher and Gary Butcher, headteacher of the kindergarten and primary school.

The coronavirus pandemic gave the opportunity “for the research and the preparation to take place”, while students had the opportunity to visit the exhibition in small groups once schools reopened, Dr Kouris told the CyBC in a recent interview.

According to a video published by the school, construction works for the private institution in Palodia were disrupted in 2004 when builders uncovered a cave containing skeletons and pottery.

Experts from the department of antiquities dated the burial chamber from the early Roman period and discovered an older tomb from the Hellenistic period dating back 2,500 years.

Some artefacts are held at the Limassol archaeological museum.

“We realise the importance of looking at history and our past, while moving forward with technology, it is from our past that we learn the valuable lessons to use in the future,” the video says, explaining the deeper meaning of the school’s name.

The exhibition is open to the public from Monday to Friday from 2.30 pm