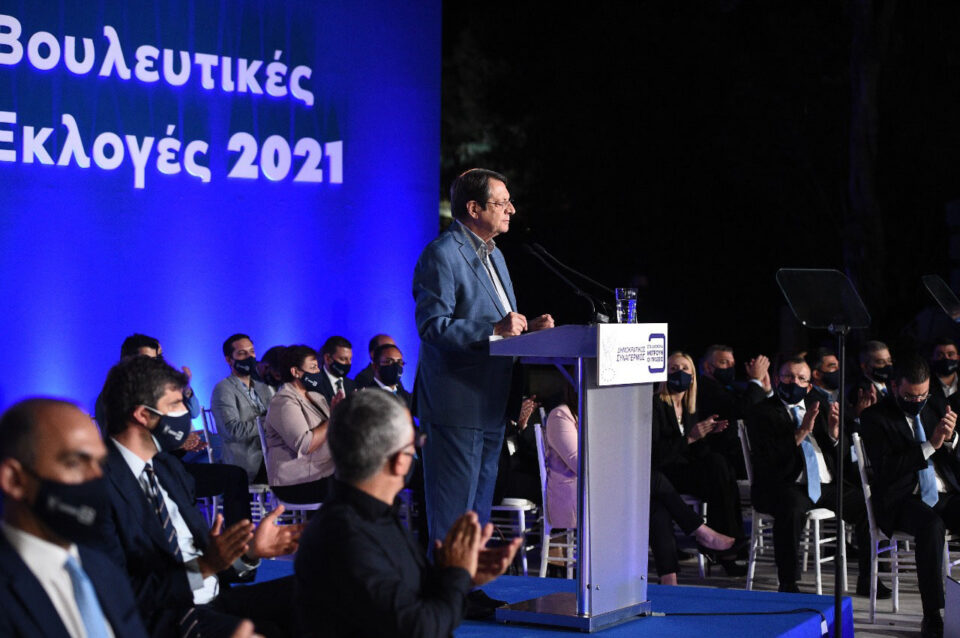 President Anastasiades at a Disy election rally in Nicosia on Sunday

President Nikos Anastasiades is taking a great deal of flak over his perceived undue meddling in electioneering as the clock runs down on the May 30 parliamentary ballot – but it could ultimately be a calculated gimmick, benefiting both the government camp as well as the opposition, each side fretting over anticipated low turnout and seeking to rouse an aloof support base.

Though by no means the first president to actively engage in party campaigning ahead of legislative elections – thus breaking the tacit protocol that the president must be a non-partisan figure – Anastasiades seems to have stepped it up a gear.

In recent days he has been involved in speaking engagements for his party Disy, his strongest appearance coming during the weekend at the party’s main pre-election gathering held in Skali, Aglandja.

In his remarks there, the president lashed out at the two biggest opposition parties – Akel and Diko – calling the administrations of Tassos Papadopoulos and Demetris Christofias “a barren decade, a decade of collusion among disparate political forces”.

Addressing criticism that he acts like a party political operative rather than as the president for all Cypriots, Anastasiades simply flipped the tables, recalling that Demetris Christofias (president from 2008 to 2013) likewise attended electoral conventions of his party Akel.

Hitting back, Akel leader Andros Kyprianou accused Anastasiades of deflecting from his own responsibilities.

“The only thing left for him to accuse Akel of, is the Asia Minor Catastrophe,” he said.

Kyprianou challenged both Anastasiades and Disy boss Averof Neophytou to a debate. And he pushed home the message that the current administration is rife with corruption scandals.

The Akel leader urged any voters out there to reconsider abstaining and to vote for Akel “giving the country prospects to rid itself of the Anastasiades administration”.

Likewise Diko chief Nicolas Papadopoulos attacked Anastasiades personally, holding him accountable for the ‘golden passports’ scandal and his government’s ongoing refusal to hand over citizenship files to the auditor-general.

Local media speculated that parties may be anxious about the general sense of indifference among voters. Daily Politis suggested, for example, that Anastasiades taking front and centre for Disy might be just the “medicine” that all parties need to stir up emotions in an otherwise flat election campaign.

Politis also said that Anastasiades may be stepping up to the plate for Disy as a way of ‘giving back’ to his party, because polling suggests Disy has taken a hit from the government’s poor track record in terms of perceived corruption in public life.

Polls show that Disy still has the lead, however.

Phileleftheros also ran a story claiming that parties worry about very low turnout this time, perhaps even exceeding the 33.26 per cent abstention in the last legislative elections five years ago.

The 33 per cent abstention rate recorded back in 2016 was not the highest, though. The highest rate occurred in the parliamentary elections of 1960, at 42.21 per cent.

But other than the one-off result in 1960, over time abstention has steadily grown among Cypriot voters.