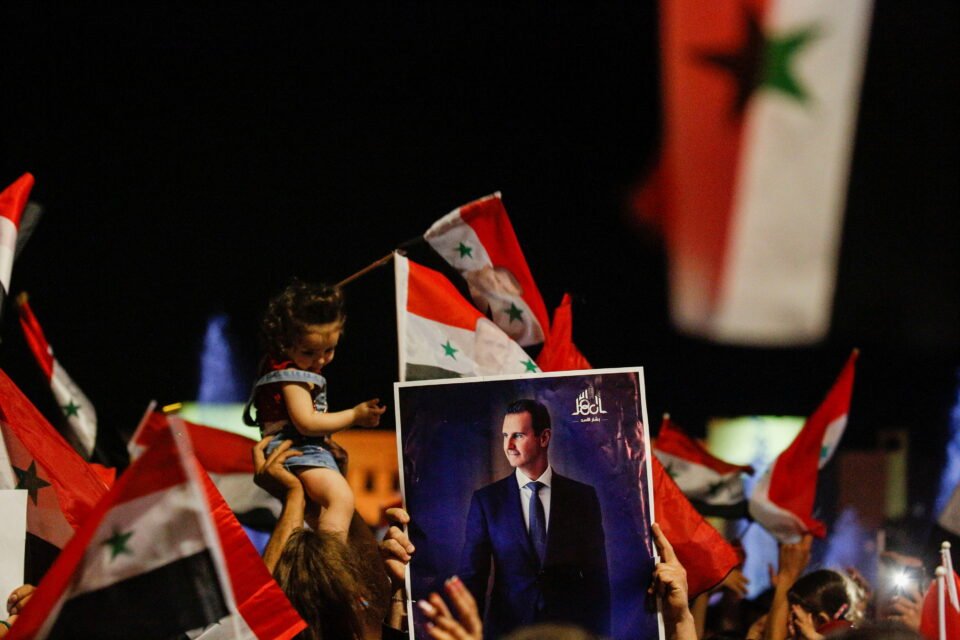 Supporters of Syria's President Bashar al-Assad celebrate before the results of the presidential election in Damascus, Syria, May 27, 2021. REUTERS/Omar Sanadiki

Syrian President Bashar al-Assad won a fourth term in office with 95.1% of the votes in an election that will extend his rule over a country ruined by war but which opponents and the West say was marked by fraud.

Assad’s government says the election on Wednesday shows Syria is functioning normally despite the decade-old conflict, which has killed hundreds of thousands of people and driven 11 million people – about half the population – from their homes.

Head of parliament Hammouda Sabbagh announced the results at a news conference on Thursday, saying voter turnout was around 78%, with more than 14 million Syrians taking part.

The election went ahead despite a U.N.-led peace process that had called for voting under international supervision that would help pave the way for a new constitution and a political settlement.

The foreign ministers of France, Germany, Italy, Britain and the United States said in a statement criticising Assad ahead of the election that the vote would not be free or fair. Turkey, an Assad adversary, has also said the election was illegitimate.

The win delivers Assad, 55, seven more years in power and lengthens his family’s rule to nearly six decades. His father, Hafez al-Assad, led Syria for 30 years until his death in 2000.

Assad’s years as president have been defined by the conflict that began in 2011 with peaceful protests before spiralling into a multi-sided conflict that has fractured the Middle Eastern country and drawn in foreign friends and enemies.

“Thank you to all Syrians for their high sense of nationalism and their notable participation. … For the future of Syria’s children and its youth, let’s start from tomorrow our campaign of work to build hope and build Syria,” Assad wrote on his campaign’s Facebook page.

Assad’s biggest challenge, now that he has regained control of around 70% of the country, will be an economy in decline.

Rallies with thousands of people waving Syrian flags and holding pictures of Assad while singing and dancing took place all day Thursday in celebration of the election.

Officials have told Reuters privately that authorities organised the large rallies in recent days to encourage voting, and the security apparatus that underpins Assad’s Alawite minority-dominated rule had instructed state employees to vote.

The vote was boycotted by the U.S.-backed Kurdish-led forces who administer an autonomous oil-rich region in the northeast and in northwestern Idlib region, the last existing rebel enclave, where people denounced the election in large demonstrations on Wednesday.

Get vaccinated, win cash as California offers $116.5 million in prizes