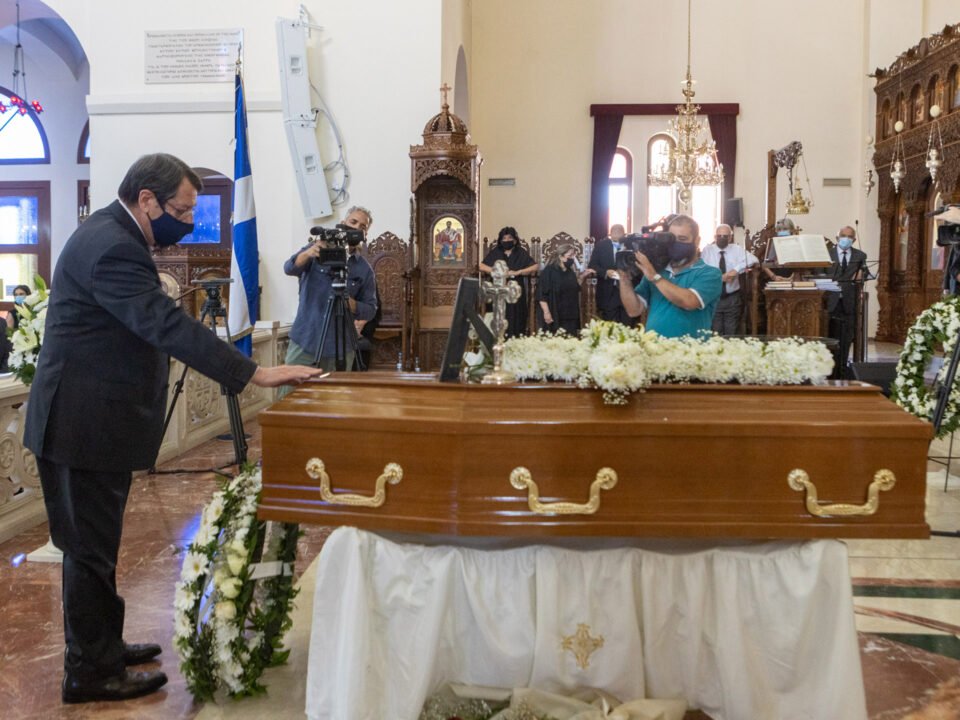 President Nicos Anastasiades on Saturday delivered a eulogy for the late Nicos Rolandis, who passed away at age 86 earlier this week.

“Today, we say goodbye to a dear and respected friend, a renowned politician, a patriot who spent his life and action in the service of the Republic of Cyprus and the salvation of our occupied homeland,” Anastasiades said.

“Nicos Rolandis was a charismatic personality, distinguished for his wisdom, insight, courage, pragmatism, compromise, but also the gentleness of his character,” he continued. “Stable and consistent in his views – and irreconcilable at first – he showed that ‘it is better to be useful rather than pleasant’”.

Born in Limassol in 1934, Rolandis’ path towards politics came later in life, when in 1978 then President Spyros Kyprianou asked him to serve as foreign minister.

He did so, dutifully, until 1983 when he resigned his post over a dispute on Kyprianou’s hard-line stance on the Cyprus problem.

Before his political career began, he studied law at the Middle Temple University in London, later becoming manager of the Limassol Coca-Cola plant at the age of just 23.

His long and varied life also saw him serving as commerce minister, creating his own political party and running as a presidential candidate.

“It was his selfless patriotism that pushed him, after the events of 1974 to leave the legal profession and business sector to become actively involved in politics, leaving his personal mark and imprint on the political events of our country,” the president said, adding that “his highly approachable personality and characteristic reasoning allowed him to develop excellent relationships with a host of world-renowned leaders and personalities”.

After his stint as foreign minister, he served as an MP from 1991 through to 1996, later merging his Liberal Party with Disy in 1998.

In the 1998 election Rolandis launched his own campaign to become president but later supported the eventual winner Glafcos Clerides, who in turn appointed Rolandis as commerce minister; a position he fulfilled until 2003.

He oversaw and pioneered significant policy initiatives such as the oil and gas exploration in the seas surrounding Cyprus. In 2003, he signed an agreement in Cairo establishing the Exclusive Economic Zone (EEZ) of Cyprus and Egypt, the first EEZ agreement signed in the Mediterranean.

“An agreement that laid the foundation for our current effort, paving the way for our energy plans with tangible results,” Anastasiades said.

The president went on to list a number of honours bestowed upon Rolandis: the Grand Cross of the Greek Order of Honour, the Grand Gold Medal of the Republic of Austria, the Order of the Yugoslav Star of the Socialist Republic of Yugoslavia.

In September 2019, he was also awarded the Medal of “Excellent Contribution” of the Republic of Cyprus, for his timeless work and his contribution to the homeland.

“It was a great privilege and honour to have had the good fortune during my political career to connect and share with you your visions and love for our special homeland,” Anastasiades said. “I will keep this patriotism of yours as a precious amulet, as a high heritage and a heavy legacy”.

“Today we say goodbye with feelings of honour, appreciation and gratitude. I want you to know that even those who disagreed with your courage or positions universally respect your multifaceted contributions to our country, and this is nothing but vindication for your conscious choices, the respect and personal responsibility you showed towards our history”.

The president added that the ethos, dignity and patriotism that characterised Rolandis should be enough to make his wife Lelia, his children and grandchildren proud, and hopefully alleviate some of the pain of his loss.

“Know that your sense of responsibility, rationalism, political discretion, struggles and your unquenchable desire for the liberation of Cyprus, denote our debt to history,” he said.

“You often said that when a person leaves the earth, in his crossed hands he does not take what he has gained, but what he has given. You, my dear Nicos, leave with a clear conscience, taking with you all that you have given, much more than you gained,” the president concluded.

Rolandis is survived by his wife Lelia and his three children.