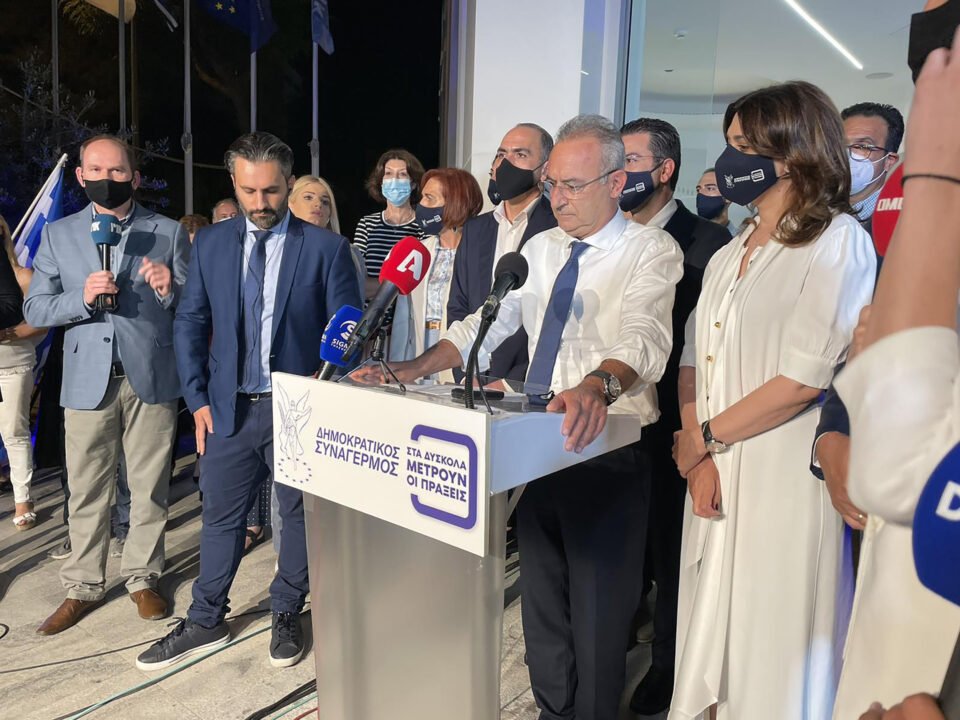 Disy leader Averof Neophytou after the results came out. Although it lost some voters, it was still the winner on Sunday (CNA)

Seven parties were set to enter parliament following Sunday’s parliamentary elections but the three biggest each lost in or around 3% over the previous legislative elections in 2016 in what is seen as a protest against the established order.

With all results in, ruling Disy, main opposition left-wing Akel and centre-right Diko saw their strength diminish, while socialist Edek, far-right Elam and Dipa – which splintered from Diko – gained at the ballot box. The latter, led by former Diko leader Marios Garoyian, did especially well in the poll, its first endeavour in a parliamentary election.

The final results were:

Akel was clearly not expecting the results they got. It was the party’s lowest result over many elections. The party already lost 7% in 2016 over the previous election in 2011 with the main opposition party now having shed 10% of its electoral strength in 10 years.

Party chief Andros Kyprianou said the party had failed to persuade voters that not all voters were the same. “We will continue to support the rights of workers, to stand up to corruption and serve the objective of the island’s reunification.”

Akel remains the basic force in the opposition, he added,  Asked whether he would resign given the election result, he said that leadership in Akel was collective, but that he would shoulder his share of responsibility. And he said that the government would continue to face problems in securing support among the opposition.

In statements after the results were announced, Disy leader Averof Neophytou said society had chosen seriousness and renounced irresponsible populism. It had taken a decision regarding tomorrow with Disy again the protagonist. He thanked those who had voted for the party and assured them that Disy would rise to the challenges ahead so as to press ahead with the necessary reforms and implement the recovery plan and create the Cyprus of tomorrow for the young people.

Striking a consensual tone, he sent out a message of cooperation to all, saying that differences must be put aside. “The next days must find us united in a House which must give weight to consensus and not fruitless confrontation. What unites us takes precedence,” he said.

He also extended a hand to Disy supporters who had not voted for the party today. “We understand and hear their message. From tomorrow we start work to vindicate those who have trusted us and to bring back all those we distanced so as to make Disy even stronger,” he said. Neophytou also had something to say about the Cyprus issue saying that as a party founded by Glafcos Clerides it was committed to working for reunification.

Diko said that even though it had lost ground, it retained its role as a powerbroker and in fact had secured considerably more votes than the parties vying for the fourth place.

A spokesman said that though they anticipated some outflow of votes through the creation of Dipa, it had not expected losing some 3% of their votes.

Speaking later from party HQ, its president Nicolas Papadopoulos said that it had been a difficult election battle for Diko as since 2016 two parties had been formed to harm it. “Nevertheless, we recognise that tonight’s results were not good as we lost 3.2%.”

However, he noted that Diko will elect nine MPs, the same as in 2016 which retains its role as powerbrokers. “Of course, we would have liked this to be accompanied by retaining or increasing our electoral strength. This saddens us and we will analyse it,” he said announcing that the central committee would meet to discuss the issue.

There was a nail-biting thriller for fourth place between Edek and Elam, both of which share a hardline position on the Cyprus problem. The two were separated at one point late into the count by only a handful of votes. Elam pulled ahead at the end to secure fourth place which carries symbolic rather than any other significance.

Edek leader Marinos Sizopoulos said that the party had against harsh odds managed to achieve many of its targets. Given that the three big parties had lost votes, Edek had managed to strengthen its vote share and increase the number of its MPs to four.

He said that but for a few dozen votes, Edek had failed to hang on to the fourth place due partly to the fact that it had been undermined both from abroad and at home. “Elam did not win the fourth spot. Some people gifted it to them.”  He did not elaborate. He also pledged that the party would persevere in its struggles.

Elam’s president Christos Christou said his party was the big winner of the elections as it had doubled it vote. “We are here to stay,” he said pledging hard work from tomorrow to help all those in need. He also pledged to stand against corruption, whoever it may come from.

The Greens, who had been seen as a contender for fourth place, also fell short of expectations. Their president Charalambos Theopemptou said the party had come under ‘ruthless’ warfare as a small party from the bigger players but had nonetheless secured representation in parliament where they will continue their work.

There were celebrations at Dipa which hailed its first participation in a parliamentary election as a great vindication. Garoyian, who on Monday celebrates his birthday, says the party’s result was the start of the rejuvenation of the centre which the country badly needed.

Solidarity, which failed to make it into the House, expressed disappointment but said it would continue to work for the good of the country. “The people have chosen to surrender without a fight,” said Solidarity leader Eleni Theocharous.  The party had two seats in the previous House.

Some 15% of voters voted for smaller parties which did not secure representation in the House. Among them is the Change of Generation of independent MP Anna Theologou who said they had given a fair fight but faced ‘dishonourable’ war. Despite their anger over corruption, the people did not punish the big parties.

The Hunters, which initially was running with Theologou but then the two went their separate ways said the 3% it recorded was a victory and thanked its voters for their support. “We fought cleanly, honourably and as volunteers. We had to face big parties with political machinery, with political subsidies and an enemy mass media. Despite this, we were only left out of the House due to a few hundred votes.”

There was a message of unity from President Nicos Anastasiades, who on the announcement of the results, congratulated parties and elected MPs and said he would call a meeting of the leaders of all parties in the new House. “We will seek through consensus the road map for tomorrow for our country. We do not have the luxury of time but must act quickly for the good of all citizens, irrespective of what they voted for. Let us all work for the Cyprus of tomorrow,” he said.

The West has done its own Belarus-style hijack