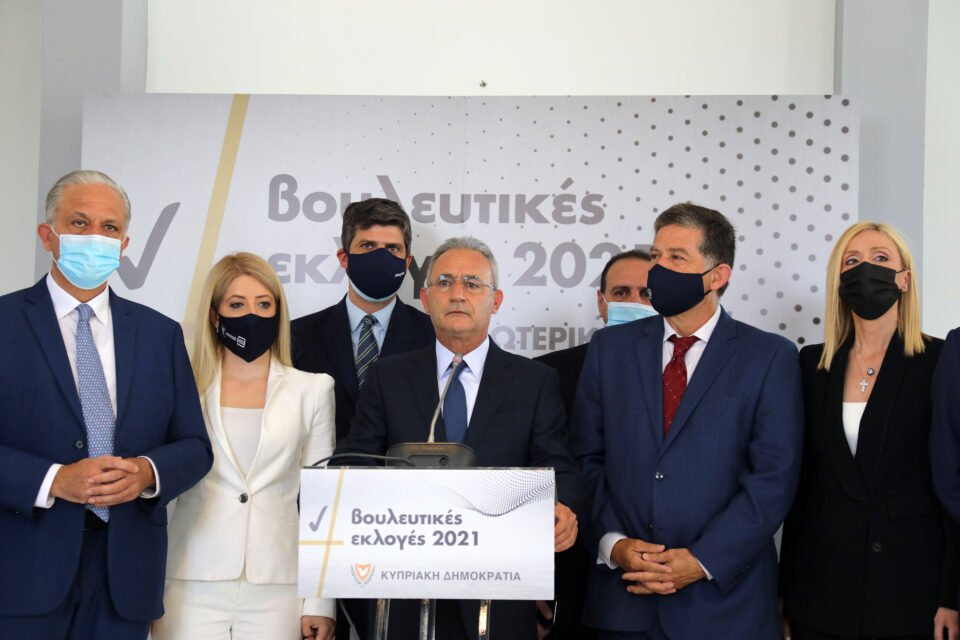 Disy Averof Neophytou said his party remains the leading political power in the country but realises the responsibility that comes with it.

The MPs and representatives of the religious groups elected to parliament on Sunday were officially announced on Monday by chief returning officer Dr Costas Constantinou.

The ceremony took place at the Filoxenia conference centre.

Party leaders escorted their deputies, both those entering parliament for the first time and those who had been re-elected, with promises to work hard to push through their proposals, despite disappointment by many over the results.

Most parties that made it into parliament lost percentages compared to last elections, except far-right Elam that doubled its seats to four and Edek, that, though it lost fourth place to Elam, saw a small rise in votes and an extra seat.

The Greens was the seventh in votes party to enter parliament. Though it had succeeded in raising its seats to three from two, it did not conceal its disappointment over the fact it lost 0.4 per cent.

Elam’s leader Christos Christou said he was satisfied his party had doubled its percentage given the attacks by other parties.

“We will work modestly and humbly for the people who are suffering, but also for the future of our children,” he said.

Head of ruling Disy, Averof Neophytou, chose on Monday to focus on the positive, his party’s success in remaining “the leading political force in our country”.

He said people “did not applaud the toxic climate” but chose positively based on the policies delivered by President Nicos Anastasiades and the party, “that contribute to the prosperity and development of our country”.

“We honour the mandate given to us by society and take on the responsibility to respond successfully to the great challenges we face,” Neophytou said.

Neophytou also said Disy would cooperate with all parties and called for unity.

“When we are all together, Cyprus is stronger and wins,” Neophytou said.

Akel leader Andros Kyprianou said his party was saddened by these results and its collective bodies would reflect on this outcome. The party’s political bureau will convene on Wednesday while the central committee will meet on Saturday to set a date for the party congress.

“The procedures that will bring Akel back to the place of the political scene it deserves, will be set in motion and the smile will bloom again on people’s lips,” Kyprianou said.

Asked whether he would seek the position of House president, Kyprianou said he had no personal ambition and that it was the party’s collective bodies that would decide on this matter.

On whether he was thinking of resigning given that his party has not won any elections since he became its leader, Kyprianou, again referred to Akel’s collective bodies.

Most party leaders focused on the work they must do from now on.

“Diko and its parliamentary group start today hard work to promote its proposals and to address the challenges for the benefit of the country and the people,” said the party head, Nicolas Papadopoulos.

He added that Diko would continue to work toward revitalising the middle class and support small and medium size businesses and vulnerable groups.

Edek leader Marinos Sizopoulos said his party would continue to struggle to support vulnerable groups of the population, against corruption and for a just solution to the Cyprus problem.

Sizopoulos, who was re-elected as MP for the Limassol district in Sunday’s parliamentary elections, thanked those who voted for the party.

“We want to reassure them, that in the new parliament, we will do our best to support the vulnerable groups of the population from the impact of the economic crisis and the pandemic,” Sizopoulos said.

Head of the Greens, Charalambos Theopemtpou, whose party won three seats, up from last parliament’s two, thanked those who voted for the party.

“We will honour your votes with hard work in parliament,” he said.

He said they have a lot of issues to promote, especially on the EU’s Green Deal EU, but also on the environment, youth, society, culture and the economy.

Eleni Theocharous, head of the Solidarity Movement that did not meet the 3.6 per cent threshold required to enter parliament said in a tweet: “The people have chosen to surrender without a fight. It is over!”. Her party garnered 2.31 per cent of the votes, down by 3 per cent since 2016.

In addition to the 56 new MPs, representatives for two religious groups were also elected on Sunday.

Yiannakis Mousas is the representative of the Maronites and Antonella Mantovani for the Latins in the new House of Representatives.

Armenian representative Vartkes Mahdessian, who was the only candidate running for the position was re-elected and declared on May 13.

How did sneakers become such a global phenomenon?