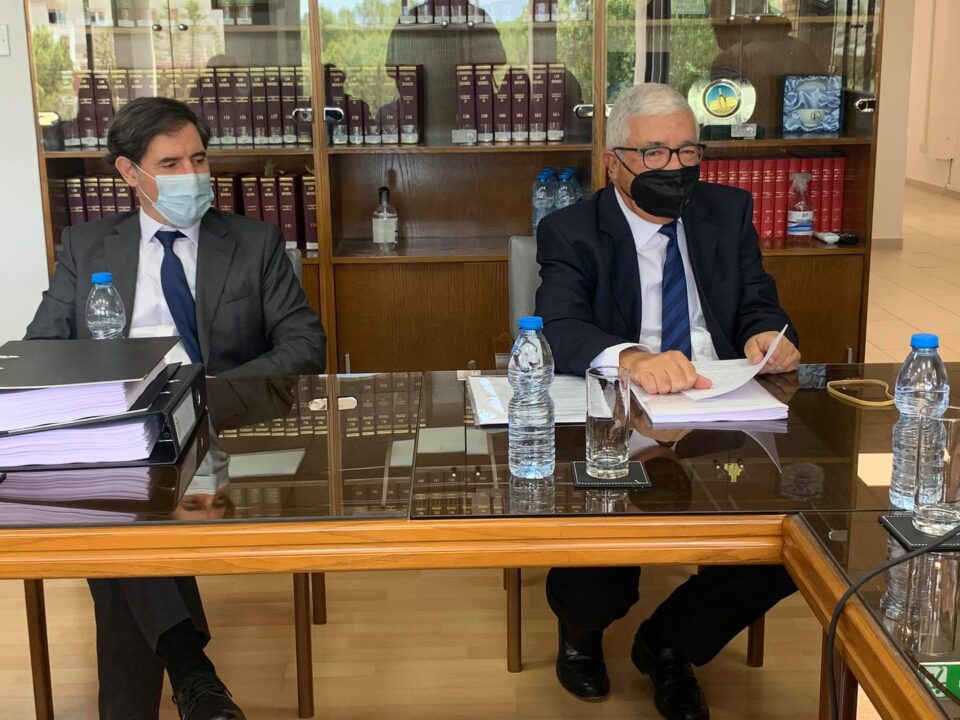 Nikolatos handing over the report on Monday (Christos Theodorides)

The interior ministry had ignored the opinion of the attorney-general in 2015 and 2016 that granting citizenships to the families of investors was potentially unlawful and the cabinet was committing offences en masse by approving the applications, the head of an inquiry into the controversial citizenship by investment programme said Monday.

The inquiry found that 53 per cent of the 6,779 citizenships given were unlawful and said politicians and institutions had political responsibilities while certain applicants and service providers may be held criminally culpable.

As with the interim report delivered in April, the complete findings, comprising around 780 pages and over 5,000 in annexes, said the cabinet decisions lacked the necessary legal authority.

“While having Legal Service opinions issued in 2015 and 2016, that the naturalisation of investors’ family members was potentially unlawful, the interior ministry continued the same practice until 2020, the year the law was amended,” Nikolatos said.

“Specifically, from the 6,779 naturalisations … 3,609 individuals, or 53 per cent, concerned family members and company executives, which were naturalised unlawfully,” Nikolatos said.

Ninety-two per cent of the investors appeared to satisfy the financial criteria while irregularities were found in the rest.

Nikolatos said 88 per cent of the applications satisfied the permanent residence ownership criterion.

“It is obvious that the investment programme operated from 2007 until August 17, 2020, with gaps and deficiencies,” Nikolatos said.

The legislation was inadequate and there was no regulatory framework.

“Also, safeguards and proper legal guidance were absent, as were adequate checks, even according to the existing laws and regulations,” Nikolatos said.

The panel also found that in some cases, certain service providers – lawyers, accountants, banks, realtors, and developers – had failed to adequately respond to their legal and other obligations.

“Nor had the service providers’ supervisors carried out the necessary checks in some cases.”

It also identified potential criminal culpability against applicants, investors and entrepreneurs, but also service providers and their associates.

There were also disciplinary issues.

“Based on the findings in questions, the committee urges the authorities to fully utilise the information included in the report to seek and punish those responsible, depending on the type and degree of their responsibility,” Nikolatos said.

“Assumption of political responsibility rests with those affected and in general the country’s political life.”

The panel also recommended looking into the possibility of rescinding citizenships in 85 cases after it emerged that applicants were suspected of criminal or other offences in a bid to secure naturalisation.

Nikolatos noted that the cabinet’s actions were subject to cancellation, under certain conditions, but its members could not be held criminally liable unless their actions were deliberate and aimed at defrauding, “something that has not been determined”.

Attorney-general Giorgos Savvides said the findings will be studied before they were made public, but they will be redacted to protect personal data and potential criminal proceedings.

Savvides appealed for self-constraint and caution in publishing any information on ongoing criminal investigations.

“Despite understanding the people’s anger and indignation, our objective is not, and should not be, to have popular courts,” he said.

Government spokesman Kyriacos Koushos conveyed President Nicos Anastasiades’ satisfaction over the conclusion of the inquiry and the government’s determination to punish those implicated in criminal or disciplinary offences.

He said the submission of the findings should bring to an end the protracted political tension and toxic climate “which mainly targeted the president and his government.”

The spokesman suggested that the head of the panel established the true facts concerning the investment programme; “despite the wrong interpretations of the law, the shortcomings, weaknesses, and inadequate supervision, no deceit or criminal act has been attributed to any cabinet.”

“Consequently, without any intention to quarrel, what must be noted is that the disparaging claims voiced by the opposition for months, the personal attacks and the slander that aimed at denigrating the president, have collapsed,” he said.

The probe had been launched in September last year following a series of media reports suggesting Cyprus was granting citizenships to dubious individuals.

Despite launching the probe, the government had strongly defended the programme until that time, saying it benefited the economy.

The video was a follow up of an earlier Al Jazeera report, which listed a number of dubious individuals who had been granted citizenship.

Syllouris and Giovanis resigned, as the government was forced to terminate the programme. The EU said it was launching legal procedures against Cyprus in relation to the programme.