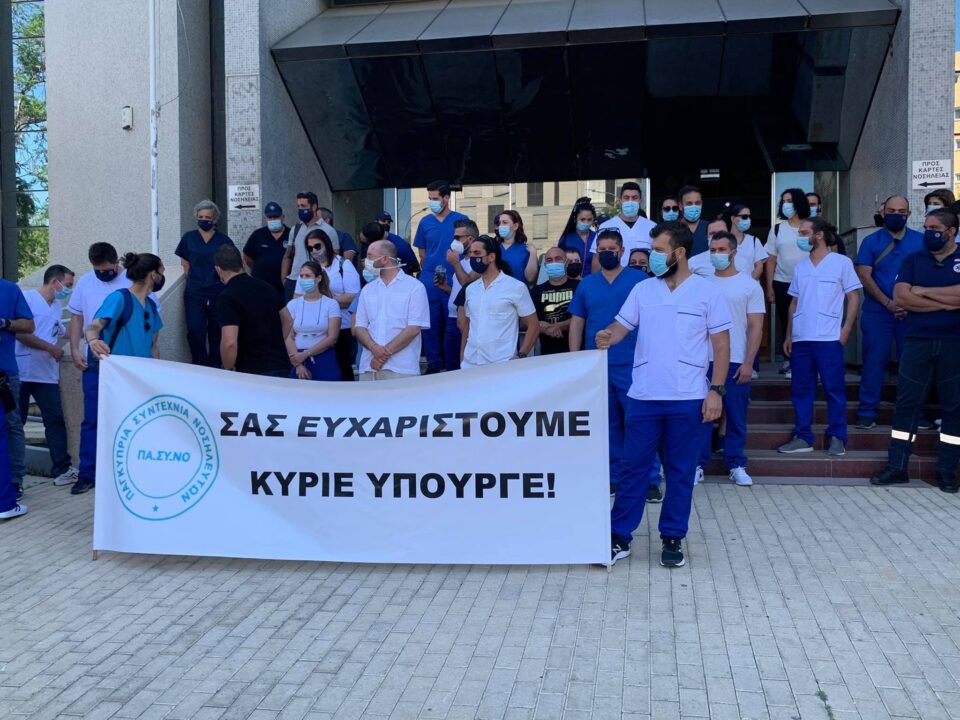 Nurses who are members of Pasyno trade union, started a 12-hour strike on Monday morning in protest over disciplinary action being taken against five of their members, obliging the health ministry among other things to reschedule more than 4,000 coronavirus vaccinations.

The five appeared before a health ministry official appointed to examine their case on Monday and the penalty – which could range from a verbal reprimand to a serious reprimand – will be handed down on Thursday.

Outside the ministry, nurses staged a protest to demand the scrapping of the disciplinary action against the five, who had abstained from work at the instructions of their union which claimed a lack of health protocols in treating a patient with coronavirus at Athalassa hospital last November.

Dressed in scrubs and carrying placards with the sarcastic comment “thank you Mr Minister,” they demanded an end to disciplinary action against them. They have blamed Health Minister Constantinos Ioannou for referring the case for a disciplinary probe, a complaint rejected by the director of the minister’s office Anastasia Anthousi who countered that having received the complaint, the minister was bound by due process to refer it for investigation.

The investigation is underway and will also look at the issue raised by the striking nurses that it should focus on the union – under whose instructions the nurses had abstained from their duties – and not the five nurses, she added.

Hospitals are operating with security staff. But vaccination centres were not deemed essential services, and as a result the strike has affected vaccinations at the following centres: Larnaca at Port B, in Limassol at the Spyros Kyprianou Vaccination Centres B and E, and in Famagusta at the General Hospital Vaccination Centre C.

Appointments have been rescheduled, the health ministry said.

Speaking on CyBC on Monday, a Pasyno spokesman castigated the health minister for failing to suspend a procedure that was illegal. CNA said the union will escalate industrial action if penalties are imposed, but any decision will follow consultations with other unions.

Pasyno’s strike has been criticised by the Chamber of Commerce and Industry (Keve), as well as political parties, as it comes at a critical juncture in the fight against the pandemic. But Akel and left-wing Peo trade union confederation expressed their support and solidarity, saying the union had been forced to strike because of the arbitrary actions of the health ministry.

Keve said that the dispute should have been discussed and resolved without resorting to strike action at a time when concerted efforts are being made to expand vaccination coverage.

Keve noted that medical and nursing staff had made tremendous efforts to combat the pandemic, and these efforts have been recognised and acknowledged. It was sad that these efforts were being blackened by the extreme action of a strike, it said as it urged Pasyno to end the strike.

Disy said the strike affects the vaccination programme and the operation of the hospitals and constitutes a disproportionate reaction that affects all of society.

“Nothing can be placed as an obstacle to safeguarding public health. The only way is that of consultations with the relevant services of the health ministry,” it said.

Edek MP Costas Efstathiou also said that with efforts underway to combat coronavirus, this was no time for the nurses to strike.

But Akel expressed its solidarity towards the struggle of the Pasyno nurses and said the ministry’s response was an attack on the employees – which for months it has said it is grateful to – and their trade union rights. “We again call on the government and the minister to respect the trade union framework and the right of workers to collective organization,” the party said.

Peo also backed the nurses, saying the strike was justified given what it said were efforts by the health ministry to turn trade union action into a disciplinary and potentially a criminal offence.

“The attempt to criminalise trade union action dates back and we know that it has been a priority for employers for many years,” it said.

Peo condemned efforts to manipulate public opinion during a difficult time for public health to make it appear that nurses’ labour action was extreme and irresponsible, as it was the ministry which should have focused on building consensus and dialogue at the workplace which had behaved rashly and acted out of a position of strength, it added.

Ukraine’s new kit sparks outrage in Russia ahead of Euros

Jewellery trends to see you through summer