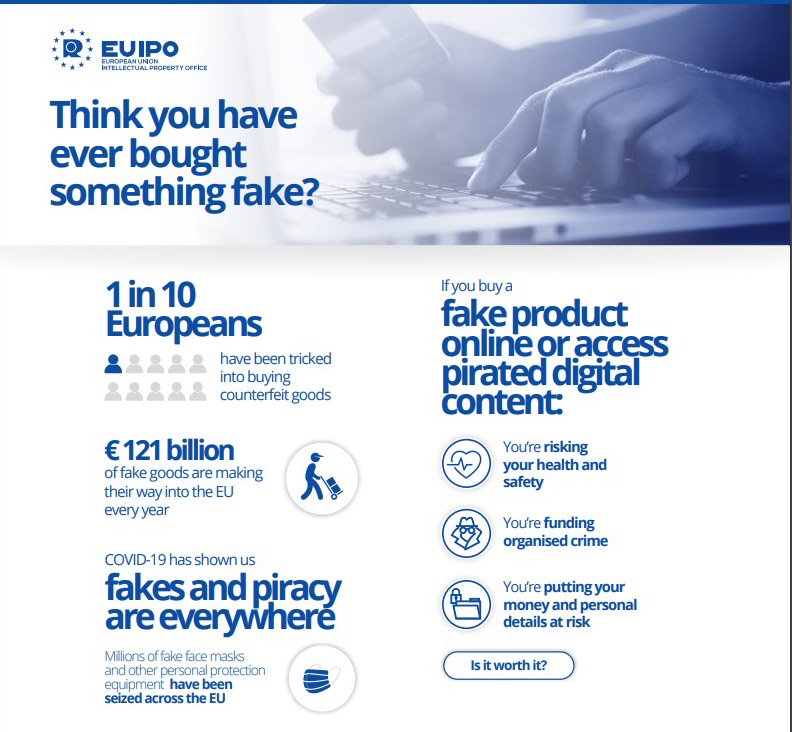 One in ten Cypriots say they were misled into buying counterfeits, according to an EU-wide survey released as part of an awareness campaign by the European Union Intellectual Property Office (EUIPO) to mark World Anti-Counterfeiting Day on June 8.

Launching its 2021 awareness campaign ‘Risks and damages posed by IPR infringement in Europe,’ the EUIPO said that the Covid‑19 pandemic and the resulting rise in online shopping and accessing of digital content, has shed new light on the risks and damages posed by the infringement of intellectual property rights in Europe and put the dangers to consumers under a microscope.

On average nearly one in 10 Europeans (9 per cent) claimed that they were misled into buying counterfeits, and a third of Europeans (33 per cent) wondered whether a product they had bought was original.

The questionnaire was similar to that of the previous survey of 2017 to allow for comparisons.

EUIPO said counterfeits represent 6.8 per cent of EU imports, worth €121 billion. They damage legitimate businesses, notably SMEs. Intellectual property is one of Europe’s most valuable assets, and a key element in our social and economic recovery, it added.

IP crime, which is often linked to other types of illegal activities, has recently been reinstated as one of the top 10 EU priorities in the fight against organised crime.

One out of ten of respondents in Cyprus said they had been misled into buying a counterfeit product – slightly above the EU27 average of 9 per cent. The countries with the highest proportion of victims of such fraud were Bulgaria (19 per cent), Romania (16 per cent) and Hungary (15 per cent). In contrast, the lowest percentages were in Sweden (2 per cent) and Denmark (3 per cent).

The EUIPO said concern over counterfeit products had increased during the pandemic. The distribution of tampered pharmaceuticals such as antibiotics and painkillers, and other medical products such as PPE and facemasks has propelled the issue to the spotlight, with counterfeiters exploiting peoples’ uncertainty as regards new treatments and vaccines.