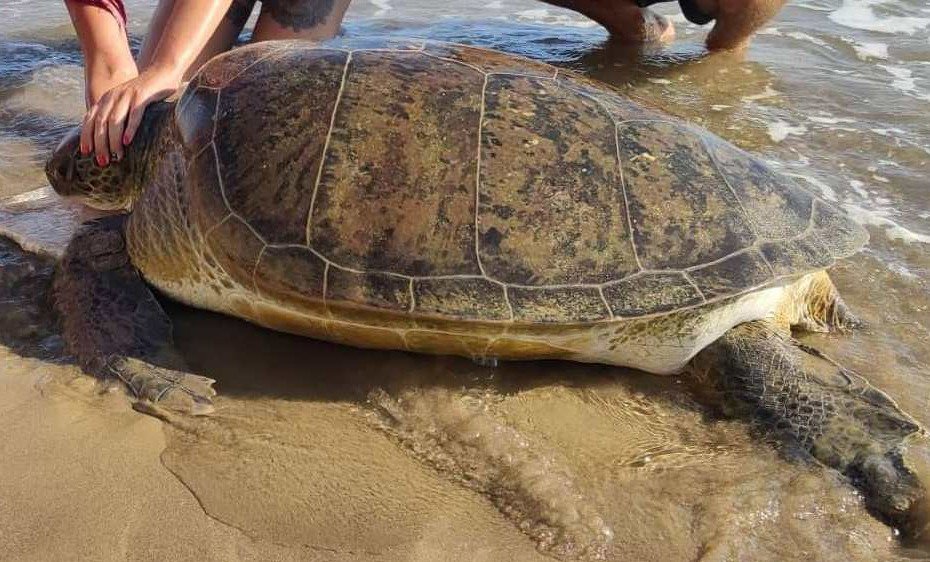 A turtle that was lying still at the bottom of the sea in Ayia Napa after being caught in some fishermen’s nets was resuscitated by amateur diver George Argiriou, who found it while swimming on Wednesday evening and administered CPR to save it.

Argiriou recorded his actions and, speaking to Alpha TV, he revealed that the CPR manoeuvre on the turtle lasted almost one and a half hours.

The video also shows the diver massaging the turtle’s neck after the CPR before releasing it into the sea.

“I spotted the turtle around ten metres deep in the sea between Ayia Napa and Cape Greco,” Argiriou told Alpha TV.

“At first it appeared dead, as it was entangled in some nets, but I decided to give it a go and try to rescue it.

“Everything I know about CPR, I know from movies so I apologise if I did anything wrong. Thankfully, the turtle restarted breathing after the manoeuvre, but I still had to massage her neck because it was still in shock and could not move at all,” the diver said.

Meanwhile, the environment department of the Sovereign Base Areas on Thursday published photos following the release of a 73kg Green turtle, called Iole, back into the sea after 10 months of rehabilitation at the Cyprus Marine Aquaculture Research Centre (CyMARC) in Meneou.

“The release of Iole took on extra significance as it also marked World Ocean Day,” said Pantelis Charilaou, the head of the SBA environment department. “It was the perfect way for the turtle to start her journey back into her natural habitat.

“We were delighted to see the successful release at CyMARC. The successful return of such an endangered, symbolic animal to its natural habitat is always great news.”

He added that the rescue can be used as an example of positive collective action between authorities and volunteers.

“Thanks to environmentally aware beach-users, who contributed significantly to the difficult rescue, we were able to organise this rescue in close cooperation with the Cyprus Fisheries and Marine Research Department.

“One of the main objectives of the SBAA environment department and the Akrotiri Environmental Education Centre, is to continuously promote such joint actions for the benefit of the conservation interest of Cyprus,” Charilou concluded.