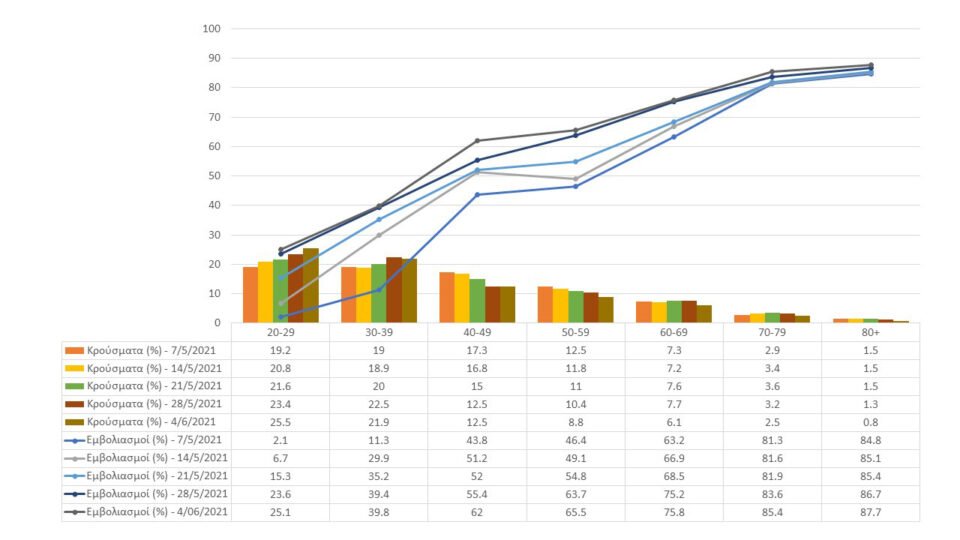 Vaccination coverage of the population is paying off, the health ministry said, citing a significant drop in cases and the positivity rate in recent weeks.

The positivity rate in nursing homes is below 0.1 per cent, a result of the timely vaccination of the elderly living in these places, the ministry added.

The vaccination portal was open on Thursday for people between 18 and 22 years. On Friday morning, at 7.30am, the portal will open for people 40 and over who have not had the opportunity so far to book a vaccination slot. It will be open for this group until 5.30am on Saturday.

The ministry said that within the coming weeks it plans on giving priority to people between 18 and 39 and then all beneficiaries over 18 will be able to book a slot.

“As the new variants of the virus have been proven to be much more contagious, prevention of their prevalence within the community is achieved through vaccination,” it said. The aim, the ministry said, is to create immunity in the population, which will offer protection and will allow the return to a more functional normalcy by lifting more restrictions.

The health ministry said that already the positive results from the vaccination coverage were visible and have brought a significant improvement in the epidemiological data in recent weeks.

“Among the ages the vaccination coverage is at a very advanced rate, according to the national reports, there is a significant decrease in the number of cases and the positivity rate,” it said.

One of the positives of the vaccination, is the decrease in hospital admissions, especially of elderly people, it added. Citing data, the ministry said that vaccinated individuals, even with the first dose, in case of infection, are asymptomatic or show very mild symptoms and, therefore, do not need hospitalisation. This also means that the health system is not burdened, it added.

The ministry also referred to the lifting of most restrictions and the gradual and safe resumption of economic and social activity, which, it said, was due to that the vaccination coverage has contributed to the improvement of epidemiological indicators.

Consequently, it added, the declining course of epidemiological indicators has led to the ranking of our country in the Orange Category of the ECDC, which will bring benefits to various aspects of the economy, with an emphasis on tourism.