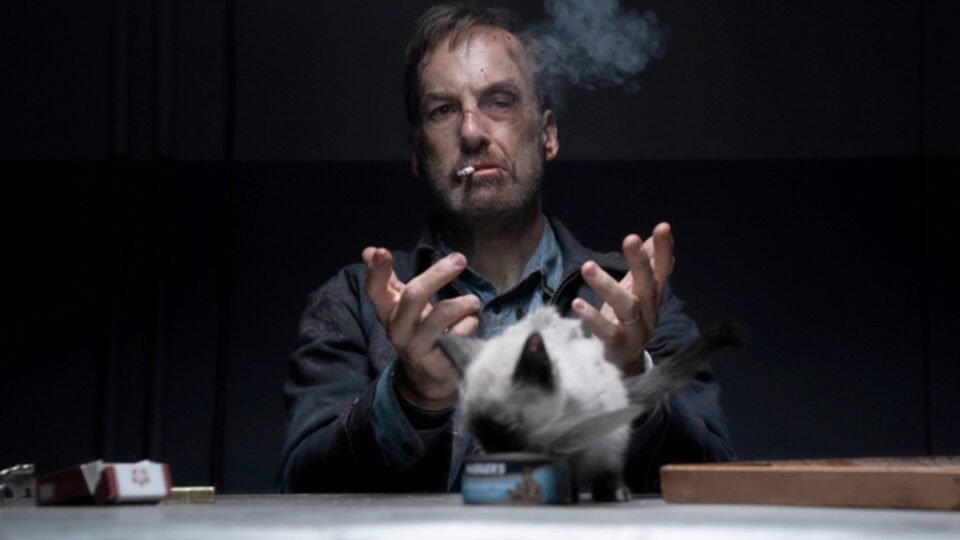 Fans will immediately recognize Bob Odenkirk from TV’s Breaking Bad, where he played the sleazy, shyster lawyer Saul Goodman so well he got his own prequel show – Better Call Saul – greenlit a few years later. If you’ve somehow managed to miss the buzz around either of these, they’re both streaming on Netflix right now. You won’t find a better example of Odenkirk’s brilliance as an actor, which is full of nuance and range. That said, you’d also be hard pressed to watch him as Saul Goodman and think “I bet this guy can really pull off a badass action hero role.” But that’s exactly what he does in Nobody.

That sort of atypical casting choice is probably what director Ilya Naishuller was going for – it’s very much part of the fun of watching the journey that Odenkirk’s Hutch Mansell goes through. Right off the bat we know that it’s all about the journey and not the destination with Nobody, as the pre-credit opens up with a bloody and bruised Hutch sitting in an interrogation room. As Nina Simone’s ‘Don’t Let Me Be Misunderstood’ blares over the soundtrack, Hutch takes out a can of tuna and pulls out a cute kitty out of his jacket like a gangster would a gun. This tonal balance of cool film noir vibe of crime blending with comedic undertones is a pitch perfect foreshadowing of what ends up being a really wild, silly, entertaining, albeit emotionally hollow, ride.

Through a fun clock-punching montage of editing tricks, we find out exactly what Mansell’s life was like a few weeks prior to him being in the hot seat. It’s an excruciatingly average suburban life. His week consists of dealing with his bored and busy real estate agent wife Becca (Connie Nielson), missing the garbage truck, working a mundane accounting job, taking the bus to work, rinsing and repeating. A string of events gets triggered by a break-and-entry in his home, and scene by scene, we slowly begin to learn that there’s more than meets the eye with Hutch. He’s been an undercover badass all along.

Imagine a parody of Die Hard (Odenkirk kind of looks like he’d be somebody’s joke version of Bruce Willis), mixed with John Wick’s adrenaline of guns, bullets, and blood, and a dash of Home Alone silly hijinks. That’s Nobody and there’s not much else to it. In terms of plot and narrative, it’s all kinds of messy. Who Hutch really is, and what this whole double life or secret identity is about, is packaged in a pretty one-dimensional way. And what Christopher Lloyd (who plays Hutch’s dad) is saying half the time is a mystery. But, so what? All of that pales in comparison to the best fight scene in a bus you’ll see all year – so brilliant in its innovation and comedy, around a third way in, that it lights up the film from there on.

That scene in the bus also paves the way for the film’s main baddie Yulian (Alexey Serebryakov) to be introduced. His entrance, as he walks from the street to the club ending up on its stage is one of the burst-out-loud-laughter moments that Nobody has a knack of pleasantly surprising you with. Yulian’s typically over-the-top villain is a great foil to the cool, calm and collected Hutch. Odenkirk’s powerful performance as a surprisingly believable ass-kicker is also a pretty good match with the action choreography and script, which has John Wick written all over it. And that’s no coincidence, as the film is written by the same guy, Derek Kolstad.

And if it’s not the eye-popping gun violence, 80s action movie one-liners, Saul Goodman kicking ass, and wonderfully eccentric Russian villains that will drag you out of your home and into the cinemas for the first time in what feels like forever, then I’ll leave you with one final reason. Pawel Pogorzelski’s cinematography – the same guy who shot modern horror masterpieces Hereditary and Midsommar for Ari Aster – makes the film looks absolutely stunning and deserving of the big screen treatment. The play of light and shadows in dark alleys, inside the dingy clubs and tattoo parlours, and yes, in that very ordinary bus, elevates Nobody into a real eye candy of an actioner.