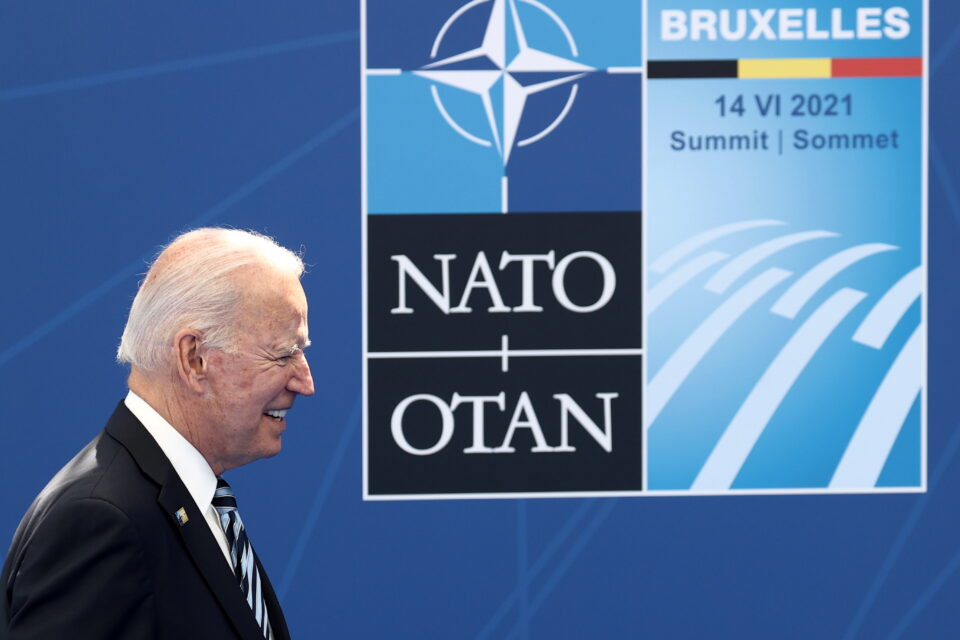 U.S. President Joe Biden at the NATO summit at the Alliance's headquarters, in Brussels, Belgium

NATO leaders warned on Monday that China presents “systemic challenges,” taking a forceful stance towards Beijing in a communique at Joe Biden’s first summit with an alliance that Donald Trump openly disparaged.

The new U.S. president has urged his fellow NATO leaders to stand up to China’s authoritarianism and growing military might, a change of focus for an alliance created to defend Europe from the Soviet Union during the Cold War.

The language in the summit’s final communique, which will set the path for alliance policy, came a day after the Group of Seven (G7) rich nations issued a statement on human rights in China and Taiwan that Beijing said slandered its reputation.

Biden also told European allies that the alliance’s mutual defence pact was a “sacred obligation” for the United States – a marked shift in tone from his predecessor, Trump, who had threatened to withdraw from the alliance and accused Europeans of contributing too little to their own defence.

“I want all Europe to know that the United States is there,” said Biden. “NATO is critically important to us.”

Biden stopped at the NATO headquarters’ memorial to the Sept. 11, 2001, attacks on the United States by al Qaeda militants, when NATO triggered its Article 5 for the first and only time. Under the article, the alliance treats an attack on one member state as being an attack on all.

Later at a news conference, Biden, who will meet Russian President Vladimir Putin on Wednesday in Geneva, said China and Russia were trying to split the transatlantic alliance and that, while he was not seeking conflict with Russia, NATO would respond if Moscow “continued its harmful activities”.

He described Putin as tough and bright.

“Russia and China are both seeking to drive a wedge in our transatlantic solidarity,” Biden said. He also pledged to support Ukraine in its conflict with Moscow, although he was non-committal on whether Kyiv could one day join NATO.

“We are going to put Ukraine in a position that they will be able to maintain their physical security,” Biden said, without giving more details.

While there are still differences in strategies on how to deal with China across the West, Biden said NATO was united under U.S. leadership. “America is back,” he said, seeking to reassure Europeans that a Trump-like populist would not be back in the White House in four years.

“The leadership of the (U.S.) Republican Party is fractured and the Trump wing of the party is the bulk of the party, but it makes up a significant minority of the American people”.

German Chancellor Angela Merkel, at her last summit of the alliance before she steps down in September, described Biden’s arrival as the opening of a new chapter. She also said it was important to deal with China as a potential threat, while keeping it in perspective.

“If you look at the cyber threats and the hybrid threats, if you look at the cooperation between Russia and China, you cannot simply ignore China,” Merkel told reporters. “But one must not overrate it, either – we need to find the right balance.”

In NATO‘s glass and steel headquarters on the outskirts of Brussels, Secretary-General Jens Stoltenberg said China’s growing military presence from the Baltics to Africa meant nuclear-armed NATO had to be prepared.

“China is coming closer to us. We see them in cyberspace, we see China in Africa, but we also see China investing heavily in our own critical infrastructure,” he said, a reference to ports and telecoms networks.

Stoltenberg also said the leaders had agreed to increase their contributions to the alliance’s common budget. The vast bulk of military spending in NATO is handled separately by member countries.

G7 nations meeting in Britain over the weekend scolded China over human rights in its Xinjiang region, called for Hong Kong to keep a high degree of autonomy and demanded a full investigation of the origins of the coronavirus in China.

China’s embassy in London said it was resolutely opposed to mentions of Xinjiang, Hong Kong and Taiwan, which it said distorted the facts and exposed the “sinister intentions of a few countries such as the United States”.

“China’s reputation must not be slandered,” the embassy said on Monday.

British Prime Minister Boris Johnson said there were risks and rewards with Beijing. “I don’t think anybody around the table wants to descend into a new Cold War with China,” he said.

From China’s investments in European ports and plans to set up military bases in Africa to joint military exercises with Russia, NATO is now agreed that Beijing’s rise deserves a strong response, although envoys said that would be multi-faceted.