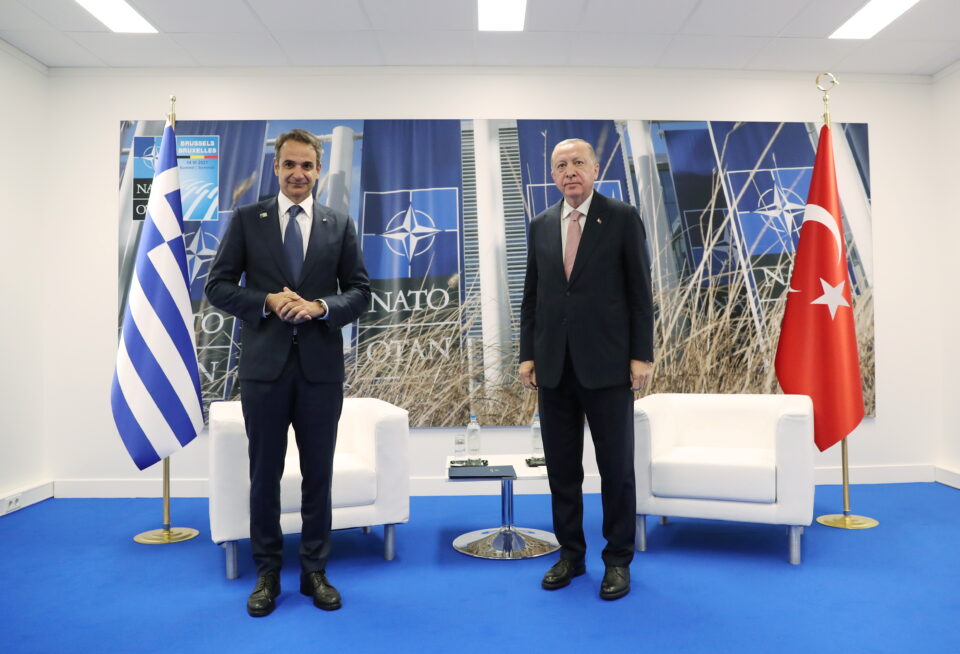 Turkish President Tayyip Erdogan meets with Greece's Prime Minister Kyriakos Mitsotakis on the sidelines of the NATO summit, in Brussels

Another informal summit on the Cyprus problem any time soon is unlikely, government sources said on Monday.

While the government expected that the Cyprus issue would be raised during separate meetings of US President Joe Biden and Greek Prime Minister Kyriacos Mitsotakis with Turkish President Recep Tayyip Erdogan on the sidelines of the Nato summit in Brussels, sources said no developments were likely on the talks process soon.

The island’s two community leaders and guarantors Greece, Turkey and the UK had agreed last April to hold another informal five-party summit on the Cyprus problem after the one in Geneva failed to achieve progress.

The UN secretary-general’s special envoy, Jane Holl Lute has launched a new round of contacts towards that end and is expected to arrive on the island soon for contacts with the two leaders.

There was no mention of the Cyprus problem after Mitsotakis’ meeting with Erdogan on Monday afternoon.

According to the Athens News Agency, citing government sources, the 50-minute meeting took place “in a cordial climate, and there was an agreement of mutual understanding that the tensions of 2020 cannot be repeated.”

It was clarified, however, the same sources said, that a series of very significant differences still exist, the main one being the delimitation of maritime zones in the Aegean and the Eastern Mediterranean.

“These differences will have to be dealt with in the context of international law, exploratory talks, confidence-building measures and political consultations.”

Mitsotakis and Erdogan also discussed the refugee and migration crisis, with the Greek premier noting that a goodwill gesture on Turkey’s behalf would be to take back the 1,450 asylum seekers whose applications were irreversibly rejected by Greek authorities.

Erdogan also held a meeting with Biden on Monday evening, while he also discussed the Cyprus issue, among other things, with German Chancellor Angela Merkel and British Prime Minister Boris Johnson.

A German government spokesperson said Merkel and Erdogan discussed Turkey’s relationship with the European Union in the run-up to the European Council meeting on June 24, and the United Nations-led resolution on the Cyprus issue.

Downing Street said, that during his meeting with Erdogan, Johnson welcomed the de-escalation of tensions in the eastern Mediterranean and stressed the importance of reaching a settlement in Cyprus through the UN-led process. They also agreed to work to deepen the relationship between the UK and Turkey in a range of areas including trade and defence.

Erdogan also had a meeting with French President Emmanuel Macron.

President Nicos Anastasiades had a telephone conversation with Mitsotakis ahead of the Greek leader’s meeting with Erdogan.

The Cyprus News Agency, citing government sources, Anastasiades asked Mitsotakis to convey to the Turkish president the position of the Greek Cypriot side that Turkey should stop its actions in Varosha, Famagusta, which violate UN Security Council resolutions. He also asked him to convey that no solution is acceptable for the Cyprus issue other than that of the bizonal bicommunal federation, something that should be taken into account in case of a new informal five-party summit on the Cyprus issue.

Cyprus, according to the same sources, could change its position and maintain a positive agenda only in the event that Turkey proceeds to reverse its actions in relation to Famagusta.