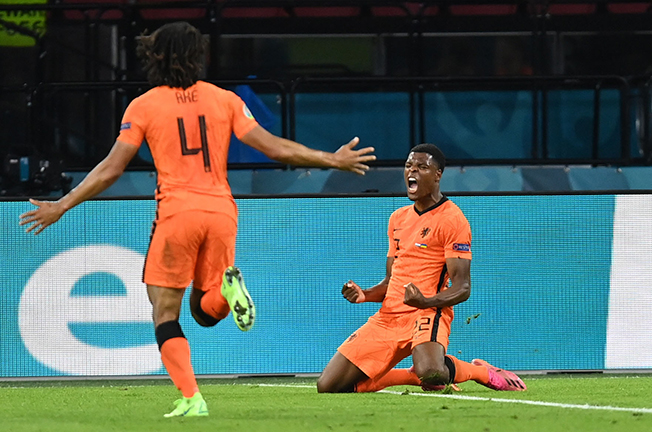 The Netherlands made an emphatic return to major tournament football by snatching a 3-2 win over Ukraine on Sunday in a thrilling Euro 2020 match after they looked to have thrown away a two-goal lead.

Defender Denzel Dumfries headed the winner in the 85th minute after Ukraine had clawed their way back into the game from two goals down thanks to a stunning curled strike from Andriy Yarmolenko and a Roman Yaremchuk header.

The Dutch had dominated large parts of the frenetic Group C match and deservedly went in front in the 52nd minute when captain Georginio Wijnaldum smashed a loose ball high into the net and striker Wout Weghorst doubled the advantage six minutes later with a scrappy finish.

Dumfries had wasted a glaring chance to score the opening goal late in the first half when he missed the target with a glancing header but he more than made amends with his late strike, helped by erratic goalkeeping by Ukraine’s Georgi Bushchan.

Gregoritsch prodded home David Alaba’s cross in the 78th minute before Arnautovic struck in the 89th, as Austria earned a first win at the Euros at their seventh attempt and their first victory at a major tournament since the 1990 World Cup.

Stefan Lainer put Austria ahead with an acrobatic effort in the 18th minute when he latched on to Marcel Sabitzer’s cross-field pass at the back post, leaping into the air to beat keeper Stole Dimitrievski from a tight angle.

North Macedonia captain Goran Pandev equalised 10 minutes later to bag his team’s first-ever goal at a major tournament after capitalising on a mix-up in the Austrian defence, but it was not to be for the tournament’s lowest-ranked team.

Austria resume their campaign against Netherlands in Amsterdam on Thursday, while North Macedonia stay in Bucharest to face Ukraine.