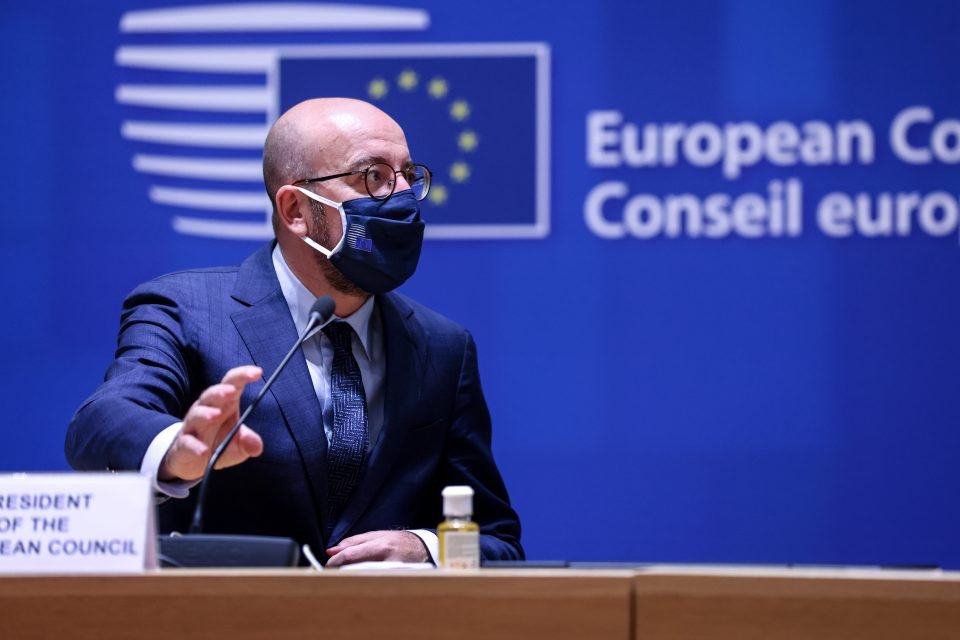 The European Council “recalls its previous conclusions” and remains “fully committed to the comprehensive settlement of the Cyprus problem in accordance with the relevant UNSC resolutions”, the 27 EU member states note in the draft conclusions of the upcoming EU Summit (June 24-25) sent to the 27 national delegations, seen by CNA.

In the same draft text the EU27 regret that “the informal meeting in Geneva under the auspices of the United Nations did not pave the way for the resumption of the formal negotiations” and reiterate that “the European Union will continue to play an active role in supporting the process”.

Moreover “the European Council reiterates the EU’s readiness to engage with Turkey in a phased, proportionate and reversible manner to enhance cooperation in a number of areas of common interest, subject to the conditionalities set out in March and in previous European Council conclusions.”

“In that framework, it takes note of the start of work at technical level towards the modernisation of the EU-Turkey Customs Union and recalls the need to address current difficulties in the implementation of the Customs Union” it is added.

“It also takes note of the preparatory work for high level dialogues with Turkey on issues of mutual interest, such as public health, climate, counterterrorism and regional issues.”

The EU27 also note in brackets (meaning that this is still under discussion) that “[on the situation of Syrian refugees in Turkey, the European Council takes note of the Commission’s proposal for the continuation of financing for Syrian refugees and host communities in Turkey, Jordan and Lebanon and calls for its swift adoption].”

Furthermore, the EU 27 note that “rule of law and fundamental rights in Turkey remain a key concern. Dialogue on such issues remains an integral part of the EU-Turkey relationship”.

Finally, on Cyprus “the European Council recalls its previous conclusions and remains fully committed to the comprehensive settlement of the Cyprus problem in accordance with the relevant UNSC resolutions. It regrets that the informal meeting in Geneva under the auspices of the United Nations did not pave the way for the resumption of the formal negotiations. The European Union will continue to play an active role in supporting the process.”

On Russia, the draft text states that “in line with its conclusions of 24-25 May 2021, the European Council returned to relations with Russia, on the basis of a report by the High Representative and the Commission.”

On migration, the draft text reads “the European Council discussed the migration situation on the various routes. While the measures taken by the EU and Member States have brought down the overall number of illegal border crossings in recent years, developments on some routes give rise to concern and require vigilance and urgent action.”

“In order to prevent the loss of life and to reduce pressure on European borders, mutually beneficial partnerships and cooperation with countries of origin and transit will be intensified, as an integral part of the European Union’s external action.”

“The approach will be pragmatic, flexible and tailor-made, and make coordinated use, as Team Europe, of all available EU and Member States’ instruments and incentives. It should address all routes and be based on a whole-of-route approach, in close cooperation with UNHCR and IOM.”

To this end, the European Council calls on the Commission and the High Representative, in cooperation with Member States, to swiftly take work forward on concrete actions for priority countries of origin and transit indicating objectives, tangible support measures and timelines; invites the Commission to make the best possible use of at least 10% of the NDICI financial envelope on actions related to migration.

Furthermore, on Covid-19 the draft conclusions note that “the European Council welcomes the progress on vaccination and the overall improvement in the epidemiological situation, while stressing the need to remain vigilant with regard to developments, particularly the emergence and spread of variants.”

“The agreements reached on the EU Digital COVID Certificate and on the revision of the two Council Recommendations on travel within the EU and on non-essential travel into the EU will facilitate safe cross-border travel. Member States will apply them in a manner that ensures the full return to free movement as soon as the public health situation allows.”

“The European Council reaffirms the EU’s commitment to international solidarity in response to the pandemic. Ongoing work to accelerate vaccine sharing and help boost global production of vaccines should be swiftly taken forward.”

“The European Council [discussed the initial lessons that can be learned from the pandemic on the basis of the report by the Commission]. It invites the incoming Presidency to take work forward to enhance the EU’s preparedness, response capability and resilience to future crises.”

Finally, on the economic recovery “the European Council reviewed the state of play of the implementation of Next Generation EU. It welcomes the timely entry into force of the Own Resources Decision, which enabled the Commission to start borrowing resources for Next Generation EU to support a full and inclusive recovery and the Union’s green and digital transitions.”

“In this context, the European Council welcomes the EU headline targets of the European Pillar of Social Rights Action Plan, in line with the Porto Declaration.”

“The European Council endorses the draft Council recommendation on the economic policy of the euro area.”