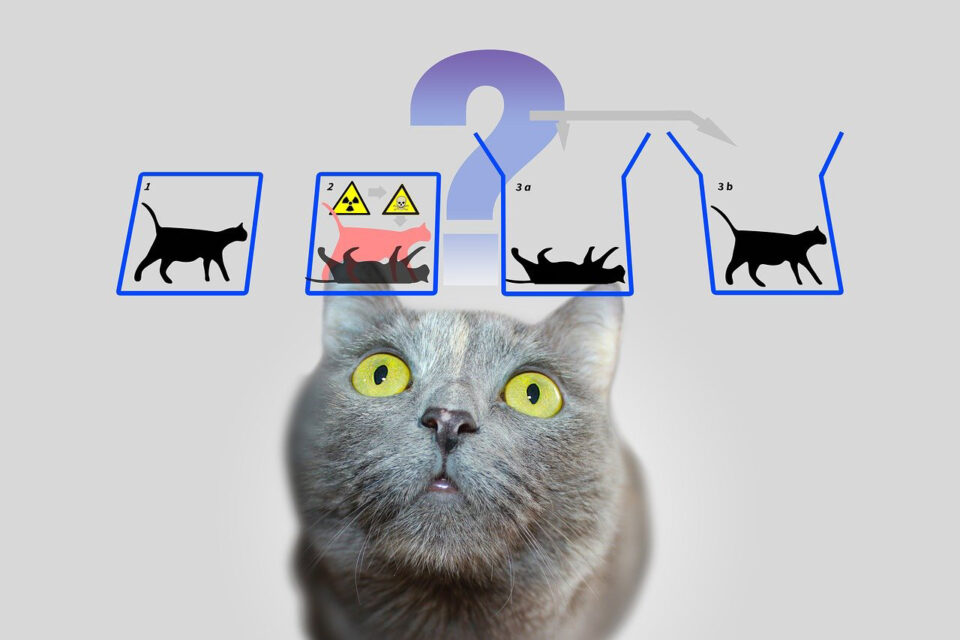 This totally imaginary cat sets a puzzle, a mind game really, for those interested in Quantum Physics (QP), my own pet interest.

The puzzle takes the form of a virtual experiment. Place one perfectly ordinary domestic cat in a comfortable cat-box already containing a fragment of radioactive material, a Geiger counter and some poison. Now, the radioactive material may, or may not, undergo spontaneous decay at any totally unpredictable moment. If it does, the emitted particle alerts the Geiger counter and this causes the poison to be released into the box, thus killing the cat. The point is that, in theory, until you open the box to look you don’t know whether the cat is alive or dead. In other words, and also theoretically, the cat is, potentially both alive and dead at the same time.

QP deals not much with things in the macro world we consciously live in but with what happens to things at the atomic and sub-atomic level. Why there should be any difference between the macro world and the subatomic world we have not the least idea. But whatever the explanation, the activities in the two fields of physics most certainly are different and behave according to different rules. In fact those who accept the natural lived-in Newtonian or ‘real’ world that is so familiar as to be simple, common sense, commonly have some difficulty in accepting the differences displayed in the micro world. QP is, to different individuals, either fascinating and a lifelong study or something about which the only thing that keeps you awake is the boredom.

For example, as everyone knows only one object can occupy the same portion of space at the same time. But that’s in the real everyday world of Newton and his laws of motion and thermodynamics. In the quantum world something can not only be in more than one place but in hundreds of other places at the same time. In fact, if we consider a single quantum particle we can’t actually be sure where it is and where it is going. Hence the Uncertainty Principle, one of the fundamental curiosities of the quantum world.

If you are already puzzled to the point of not caring a damn where a photon or two currently happen to be you have joined the ranks of most human beings.

Yet quantum mechanics underlies nearly all of modern physics, explaining everything from the structure of atoms to why magnets stick to each other. Quantum objects such as electrons therefore live in a cloud of uncertainty, mathematically encoded in a ‘wavefunction.’

The most common way of understanding this was formulated in the 1920s, and is called the Copenhagen interpretation. It says that the act of observing a quantum system makes the wavefunction ‘collapse’ from a spread-out curve to a single data point. This is a theory that cannot, so far, be proved, yet it apparently does.

The Copenhagen interpretation left open the question of why different rules should apply to the quantum world and the classical world of everyday experience. But it confirmed that although quantum objects live in uncertain states, experimental observation thereof happens in the classical realm and gives unambiguous results. Quantum objects such as electrons therefore live in a cloud of uncertainty, mathematically encoded in a ‘wavefunction’ that changes shape smoothly, much like ordinary waves in the sea. Nevertheless, when a property such as an electron’s position is measured, it always yields one precise value every time.

But, returning to that darned cat, there is a curious consequence of the cat puzzle which restores a sense of reality to the theories. A few years back an enterprising manufacturing wit offered for sale a series of intriguing T-shirts. One of these embodies the spirit of the puzzle. On the front of the shirt is printed the words ‘Schrodinger’s Cat is ALIVE/DEAD’. Following up on the caption some sociology researchers conducted their own puzzle. Those who took part were asked, beforehand, whether they were dog lovers or cat lovers.

They were then shown the shirt.

One possible option has recently been proposed. ‘Why not simply remove the cat from the box and replace it with a real live physicist, and these do exist, who could inform the world whether or not he was alive, or simply die and remain, for evermore unmourned in his box.

No heart some people.

For now, physicists seem likely to continue debating the point as they feel, and I quote one of them. ‘I don’t think we’ve quite made sense of this puzzle yet.’