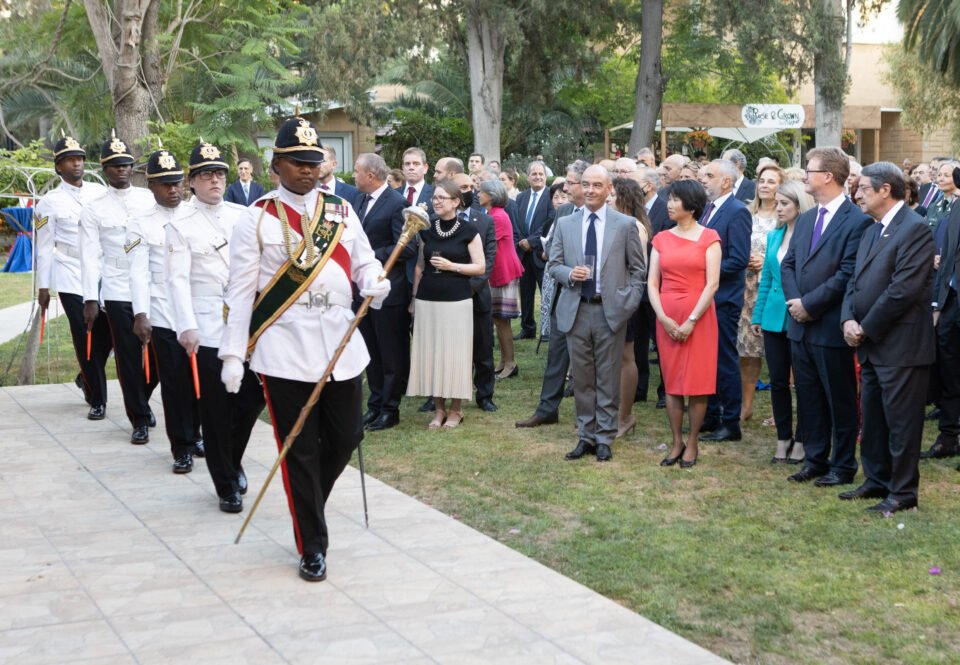 With political will and commitment, and with flexibility and creativity, the two sides in Cyprus can find the necessary common ground to build a common future, British High Commissioner Stephen Lillie said on Wednesday.

Lillie was addressing guests at the High Commission’s annual bash in Nicosia to mark Queen Elizabeth’s birthday. The queen turns 95 this year. The reception, slashed back in terms of numbers this year due to the pandemic, was attended mainly by politicians, including President Nicos Anastasiades, and foreign diplomats.

Lillie said Britain welcomed and supported the efforts of the UN secretary-general to make progress through the informal 5+UN meeting which took place in Geneva in April.

“We continue to work with urgency and determination for a successful follow-up meeting at the earliest opportunity,” he said.

He said that the UK was clear that the established UN parameters of a bizonal, bicommunal federation with political equality “were broad and flexible enough to accommodate the interests and aspirations of Greek and Turkish Cypriots alike”.

“I am convinced that it will be possible to find the necessary common ground between the two communities so that they can build a common future together in conditions of peace, security and harmony,” he added.

“Reunited, Cyprus can achieve its full potential as a regional hub of peace, stability and prosperity in the Eastern Mediterranean”.

Lillie also made reference to the fact that this was not only the first ‘Queen’s Birthday Party’ (QBP) since the start of the pandemic – last year’s was cancelled – but also the first since Britain left the European Union.

“We have opened a new chapter in our national story, open to the world, and determined to forge a confident new path as a force for good on the global stage,” he said.

At the same time, he added, the UK remained by every measure a European country, linked to friends and allies in Europe by ties of history, culture, friendship, values and geography.

“Our relations with Cyprus in particular are as strong as ever, underpinned by a wealth of personal, professional and institutional connections and a shared history,” he said.

Despite the challenges of Covid19, the UK continued to work hard over the past year further to strengthen collaboration, with advances in a number of areas, including e-governance and e-justice, non-military development in the Sovereign Base Areas, and the Royal Navy’s largest ever deployment to Cyprus last autumn for combined exercises.

In his own speech, President Nicos Anastasiades reflected on the “long-standing friendship and enduring bonds” between the two countries, highlighting the Cypriot government’s commitment to continue building on them on a bilateral and international level.

Referring to the 300,000 Cypriots living in the UK, but also the 70,000 Britons living in Cyprus, the president said that “people-to-people contact” is another dynamic aspect of the relationship, expressing hopes that Cyprus will soon be upgraded to the UK’s green category to facilitate tourism.

As regards the Cyprus problem, Anastasiades said that the UK’s role is “critical” in ensuring all parties remain committed to UN resolutions looking towards a bizonal, bicommunal federation, but also “in impressing upon Turkey the absolute necessity for having an environment conducive for productive negotiations”.

“I do hope that Turkey would not move forward with its illegal actions as regards our Exclusive Economic Zone or the violation of the status of Varosha or the further militarisation of Cyprus, since any such acts would prove gravely detrimental to resuming the negotiating process,” he said.

Federer loses to Auger-Aliassime in Halle