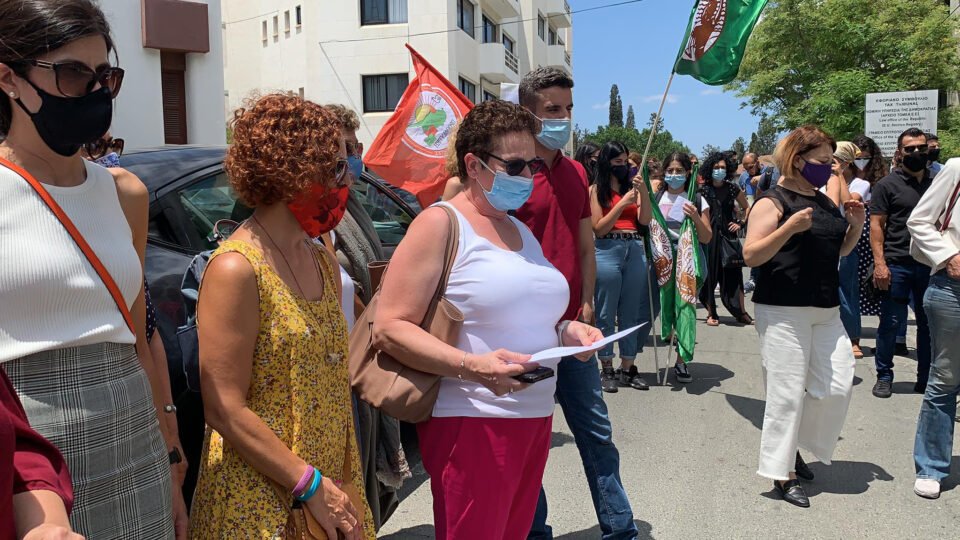 A group of demonstrators on Wednesday gathered outside the offices of the legal service to protest against a decision by the attorney-general not to prosecute 15 police officers named in an independent inquiry over their apparent failure to properly investigate missing persons reports, allowing a serial killer to go undetected for about three years and killing five women and two children.

The protest was organised by Pogo, the women’s branch of opposition Akel. Women carried signs with slogans such as ‘the patriarchy is murdering us every day’ and ‘shame on the attorney-general’.

In an address to the gathering, Pogo general-secretary Skevi Koukouma slammed the outcome ending for “those who showed obvious negligence and did not do everything that was their duty to do”.

She said they should have searched, investigated and been interested in the disappearance of the missing women.

“The [AG’s] decision, in our view, shows tolerance for unacceptable, half-hearted and racist behaviour and sends the wrong messages to society,” Koukouma said.

Attorney-general Giorgos Savvides announced Monday that after evaluating the evidence against 15 officers it was judged that it could not under the circumstances “prove beyond reasonable doubt that the members of the police deliberately neglected their duty.”

Savvides’ decision reversed the decision of his predecessor, Costas Clerides, to prosecute the 15 constables, sergeants, and officers who faced a single charge relating to failure to perform their duties.

“The decision of the legal service not to proceed with criminal proceedings has been a common secret of recent months,” added Koukouma. She said it was part of the electioneering campaign to hide it away until the elections were over so it would not create negative publicity for the government’s side.

“The decision of the legal service is really unprecedented and essentially sends the message that today in Cyprus, with this government, with this police force, with this attorney-general, institutional racism can be tolerated,” Koukouma said.

“For us women, the only way is to react against this decision.”

The public outcry at the time forced the resignation of Justice Minister Ionas Nicolaou and the dismissal of the chief of police. Police were heavily criticised for allegedly mishandling the cases when some of the victims were reported missing by friends and family, and not treating the disappearances seriously.

See you in Polis Chrysochous this summer!