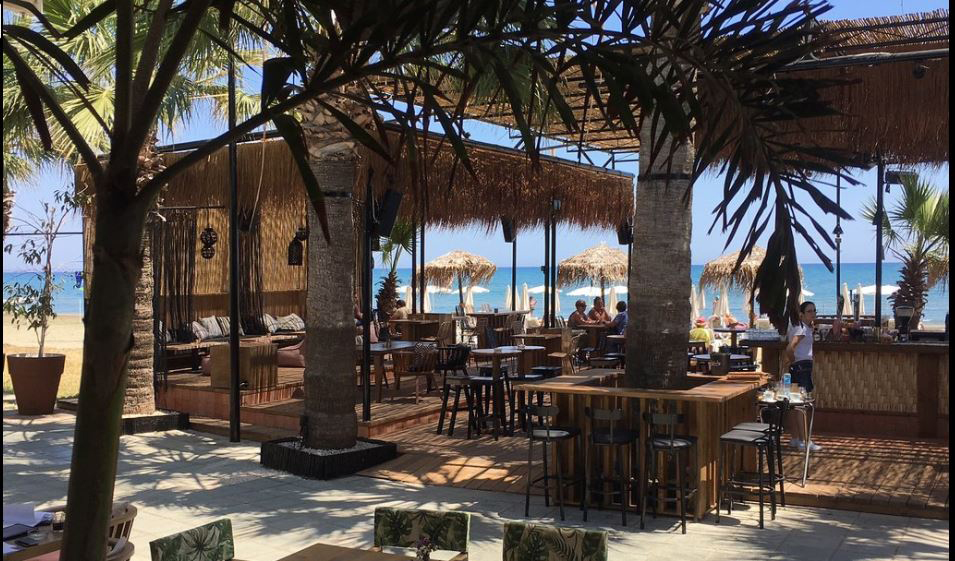 Restaurants and bars are open again! Let’s hope its permanent this time as it’s refreshing to go out and feel some vibrancy. With this in mind, we booked at ReBuke lounge on the ever popular Makenzie beach of Larnaca which is buzzing again as things almost feel (dare I say) normal.

We arrived and were greeted by a well-dressed and pleasant looking hostess who asked if we had a reservation. I confidently gave her my name feeling safe in the knowledge that we definitely had a table waiting for us. However, she began to look a little awkward and told us that as we were late, the table had been given away, despite the fact I had called to tell them we were running late and they had said it was OK!

Feeling disappointed I insisted that I was told I had a table and after a scan of the restaurant and a look at her list, we were shown to an island table for 2. All smiles again, we were presented with menus and told to feel free to ask if we needed anything.

The menu is very extensive and had more than enough options to satisfy all types of taste and preference. There were vegetarian, gluten-free and vegan options as well with the now famous ‘beyond meat’ burger available.

Being at a trendy, sea-side restaurant, I expected to pay above average prices but looking at the menu, I felt that overall the prices were a little lofty. It also seemed pricing was a little random; an appetizer of halloumi is almost the same price as a main of pork steaks and the Black Angus burger!

However, we already had in mind that we wanted sushi. It’s not a dish easily made at home or that I like to order as delivery so I had missed it. There was the usual nigiri, sashimi and maki rolls that you would expect but they also had some rather interesting options too; one of the rolls is topped with kateifi!

The maki comes as a serving of eight pieces but as we wanted to try a variety, we decided to opt for a platter that had different varieties with four of each type. Keen on sampling the maki with kateifi, we opted for the “King” platter which, alongside the Ebi Kateifi, had dragon, ebi crunchy and a maki version of the 80s classic, prawn cocktail!

The environment at ReBuke is quite chilled. Despite the upbeat and very loud music, there was still a blissful summer vibe. The décor was perfect for the summer with a bamboo theme yet it still managed to somehow feel cosy and modern boho.

Despite not being sat at a table with a sea view, we still enjoyed the aesthetic of the place and getting urban vibes as we could see the cars and people going by.

The food quickly arrived and it was beautifully presented! After pouring my soy sauce into a little pot and mixing in a little wasabi, I was good to go! The maki was well made and rolled tightly – there’s nothing worse than having your roll disintegrate as soon as you dip it in your soy sauce! The rolls were bursting with flavour too. I loved the crunch of the ebi, perfectly balanced with the sweet honey mayo and the avocado with cream cheese combo.

Despite being well made and flavourful, we didn’t find the platter to be very filling as the rolls were a little smaller than average. Looking at other dishes being taken to other tables the portion sizes looked quite substantial but I wouldn’t go hungry if planning on having maki.

Despite the small mix up at the beginning, overall we felt looked after, loved the feeling of the place and thoroughly enjoyed what we ate. Yes, the prices are a little above average but ReBuke has done enough to make me want to go again, even if it is just for a lounge by the sea with a cocktail and shisha.

Nadal pulls out of Wimbledon and Tokyo Olympics

Larnaca transforms into a Christmas land