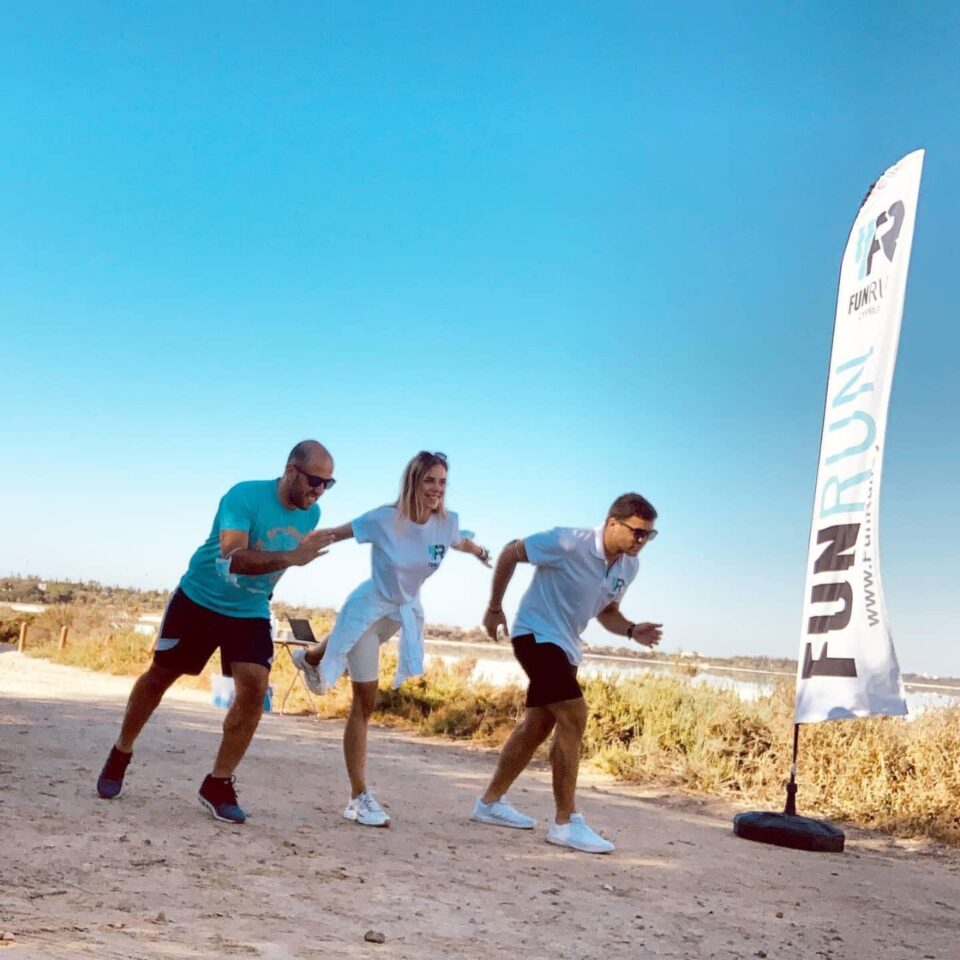 Running is viewed as an isolated form of exercise. Limassol-based Fun Run Cyprus is here to change that perception by cultivating a community of like-minded people who help support each other during their runs.

“I’d never gone running by myself before. I always played sports like football, a team activity. Then I went back to South Africa where I was invited to a group run in a park, where 600 people had gathered to participate in a group run,” says Paris Kolonas, co-founder and the driving force behind the inception of Fun Run Cyprus. Paris, the day-to-day person and overall face of the company, co-founded Fun Run with his brother Achilleas, in charge of business development, and Anastasija Tarasevic, who manages Fun Fun’s branding, marketing and social media activities.

Most people would never think of running as a group activity, let alone one where there is a cost involved. Fun Run allows people to register for free, after which there is a €5 charge for the first run and a €3 charge for every subsequent run. Paris outlines Fun Run’s value proposition below.

“You meet people that run the same pace as you, you socialize with other people who have the same goals as you, who want to stay fit. There’s a sense of comradery and belonging. We are making people aware that they can meet other people and run together, not competitively but at the same pace,” Paris explained.

“Also, people like my parents, they don’t walk or run. But I asked my dad to join me once and I went at his pace and timed him. Slowly but surely I got him to cut down his time for the same distance. My dad loved this aspect and he is now steadily improving his fitness and average speed and aims to beat his own scores,” he added.

Fun Run is focused on demystifying running as an activity and invites people of all levels, including those who wish to start by simply walking and then gradually move on to running.

“If people get fitter and faster they can easily find people at their own fitness level within the Fun Run community and run along with them. So there is a friendly edge to the whole thing. There are running clubs in Cyprus but nothing like this. So FunRun is a platform. We are not coaches or fitness trainers. We just want to encourage people to start running and walking in an enjoyable and fun way,” the Fun Run co-founder notes.

“You can start by walking and it’s not an issue at all. You have to start somewhere and there is absolutely no stigma. You can just start your fitness journey wherever you are. If you only have a Saturday morning (applicable to Limassol at the time of writing), we will be there with you even if no one else comes. We will run or walk with you,” Paris added.

“Whenever we started going there was a lockdown. Obviously the best time to run in Cyprus is in winter or autumn, which were the times when the more severe lockdown measures were in place,” Achilleas said.

“But now we do it in the summer and we bring cool water for everyone joining. We have that on hand for everyone as we know that people don’t want to carry water bottles with them all the time. Also, this is obviously a group exercise and social distancing measures prevented this from taking place. People were also a bit more careful. This meant that we had to essentially relaunch several times,” Achilleas added.

Paris, Achilleas and Anastasija are acutely aware Fun Run Cyprus that some people will be apprehensive about the idea, but are focused on changing hearts and minds.

“One of the biggest challenges is to convince people to pay to run when you can run by yourself for free. The reason for this is that we have to fund everything ourselves, there are no corporate sponsors involved. We have to pay for the website costs, the water we provide to the runners, our own transportation costs, and so on,” Achilleas explained.

“The goal by the end of the year is to expand to all four main cities in Cyprus and to have a paid, main sponsor. So for example it can be FunRun brought to you by a certain company or business that has the same interest as us. Mainly, wellness, fitness and good health.

Fun Run has previously conducted events across Limassol, as well as in Larnaca. The plan is to offer routes around the island.

“The goal by the end of the year is to expand to all four main cities in Cyprus and to have a paid, main sponsor. So for example it can be Fun Run brought to you by a certain company or business that has the same interest as us. Mainly, wellness, fitness and good health,” Achilleas concluded.

The post-Covid boom and the road beyond