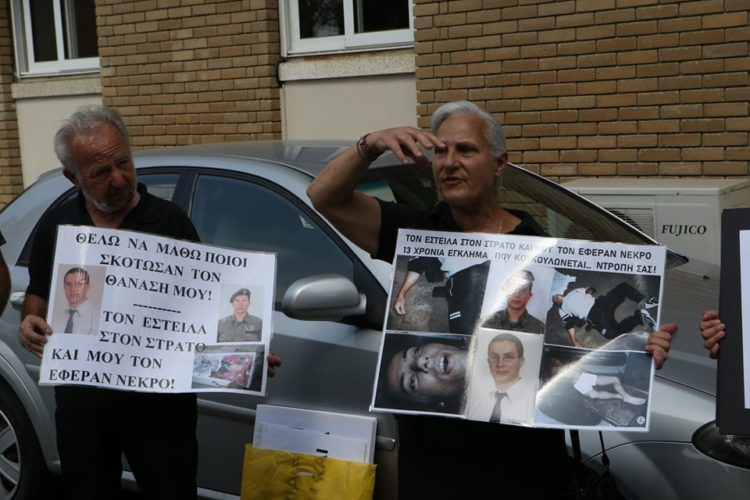 The death of a soldier 16 years ago, which appears to have been the result of strangulation and not suicide as initially thought, should be investigated, and resolved as a matter of priority, his family’s lawyer said on Friday, otherwise they will report Cyprus to the human rights court for a second time.

A pathologist hired by the family said the death was the result of strangulation and not suicide.

Demetra Karayianni said she had found that his hyoid – a U shaped bone that supports the tongue — was fractured and it had been caused before his death.

Karayianni was adamant that the fracture had been caused ante mortem and could only be caused by strangulation or hanging.

The report of a second pathologist who represented the government has not been made public yet, but reports suggested it ruled that foul play was possible.

Injuries to the hyoid bone are rare. The most commonly reported injury is fracture, and it is often a post-mortem finding with a high incidence in victims of strangulation and hanging.

He was found dead under a bridge in Alassa, Limassol, about 12 kilometres from his home and barracks. He was meant to report back to his unit after an overnight leave.

Last year, a court ordered Nicolaou’s exhumation, and his bones were sent to Greece for examination.

The pathologists’ findings will be conveyed to the coroner who is expected to hold a hearing on July 8.

The family’s lawyer, Loukis Loukaides, said the state Legal Service must instruct the police to investigate the case and “find those responsible for this horrible crime.”

“The case must be given priority, this murder is provocative,” Loukaides said, adding that Nicolaou was a young lad who had no reason to take his own life.

Loukaides said the police could find those responsible despite 16 years going by.

“Time harms a case but if there is something to be found you will find it; it is not the first time a crime is solved after many years.”

He warned that the family would not hesitate dragging Cyprus before the ECHR for a second time if the authorities fail to properly investigate the case.

In February 2020, the ECHR ruled that the authorities had botched the investigation into Nicolaou’s death.

“The court finds that the foregoing considerations are sufficient to establish that the domestic authorities failed to carry out an effective investigation into the circumstances surrounding Mr Nicolaou’s death and accordingly that there has been a violation of the procedural aspect of Article 2 of the Convention,” the ECHR said.

According to the ECHR ruling, the root of the problem lay in the initial police investigation which “was marred by a number of significant shortcomings”.

His mother, Andriana, said her son had been bullied but had misgivings about reporting it to his superiors. After finally having papers thrown in his face by fellow soldiers, Thanasis filed a complaint to his commanding officer.

Thanasis had moved from Australia with an architect’s degree from Melbourne University, to set up a new life and an office in Cyprus.

But he first had to complete six months of compulsory army service, during which, according to his parents, he was bullied for the first three months before his death.

Two police investigations, a military investigation, an investigation by two criminal investigators appointed by the cabinet and two inquest proceedings were conducted over 13 years.

The investigation was brought to a close in September 2018 with the attorney-general’s decision that it had not been possible to secure evidence indicating that Nicolaou’s death had been the result of a criminal act.

His death was quickly ruled a suicide by state pathologist at the time Panicos Stavrianos. Based on that, the police did not even entertain the possibility of foul play.

“The Court observes that it emerges from the case-file that the entire initial police investigation was from the very beginning conducted on the premise that this was a simple case of an unnatural death and that Mr Nicolaou had most likely taken his own life, never seriously questioning this premise or endeavouring to verify any other possible scenario. As a consequence, the investigation was not carried out by experienced criminal police investigators with forensic experience and the line of investigation was limited, leading to oversights and, as many questions were left unanswered, a tenuous conclusion.”