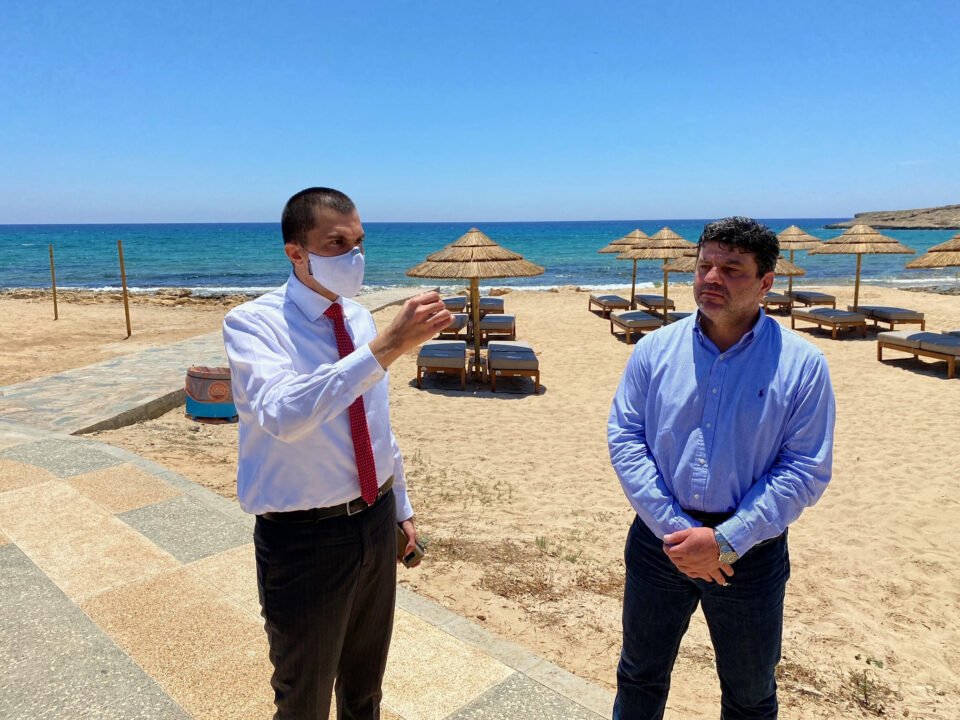 Deputy tourism minister Savvas Perdios, accompanied by Ayia Napa mayor Christos Zannetou on Friday visited the newly-upgraded Pernera and Katsarka beaches which were reformed thanks to a sponsorship scheme aimed at improving the tourist product.

The mayor thanked Perdios for his presence, and the deputy ministry for providing the planning and funds for the project.

Announced in October 2020, the deputy ministry’s sponsorship plan has funded the upgrading of 11 Cypriot beaches, which will be presented soon, according to Perdios.

“One of the deputy ministry’s dreams was to upgrade our tourist product through our beaches,” he said, adding he was pleased Ayia Napa municipality could benefit from the scheme.

Pernera beach has been set up with high quality sunbeds and wicker umbrellas but also an open-air gym and other amenities, he said.

Ayia Napa municipality’s goal is “to make quality upgrades to the local tourist product, with the goal of attracting more visitors and fulfilling their expectations,” he added.

“Through the national tourism development strategy laid out by the deputy ministry, we are implementing these changes with the goal of allowing our tourist industry to operate year-round”.

Perdios congratulated Zannetou and his team for the project, saying the beach realised the ministry’s vision when announcing its sponsorship scheme.

“Everything I’ve seen today is unbelievable. I am stunned,” he said.

As well as changing the aesthetics of the beach, the project has sought to improve infrastructure through a promenade, bike lane, amenities and a lifeguard tower, Perdios added.

“High demand for areas in free Famagusta is no coincidence,” he said, pointing out more changes taking place in Ayia Napa harbour and the surrounding area.

“We will continue trying to attract as many tourists as we can, because our country deserves it and not just because of its good epidemiological outlook, but also thanks to serious upgrades that have taken place in recent years”.

He finally said that the deputy tourism ministry will continue standing by local communities and beachside municipalities, inviting more to join the scheme when a second run of applications is announced next month.