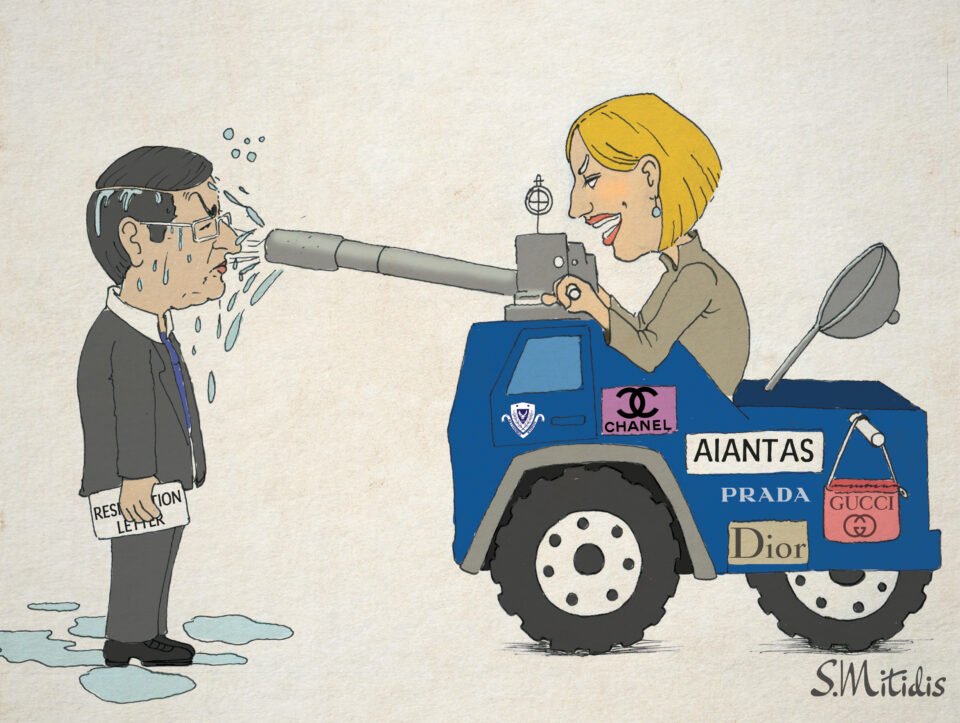 YOU ALMOST felt sorry for Prez Nik after the week he has just had. The number of public rejections he suffered would have forced lesser men to go into hiding for months to get over the embarrassment.

But not our Nik, who possesses stainless steel self-belief and the confidence of a public-school boy. He was still out and about attending public events and talking to hacks, as if he did not give a damn. If he did, you would have to credit his thespian skills because he did not give this impression.

By Tuesday all the political parties had officially turned down his invitation to join a so-called government of broad acceptance, an idea that had ‘non-starter’ stamped all over it. He was fortunate that Elam declined his invitation because he would have been endlessly pilloried for harbouring ultra-nationalist fascism sympathisers.

On the other hand, when an extreme right-wing party, desperate for legitimacy and respectability, turns down an offer to join the government and declares it would rather stay on the outside, you know that the good times are over.

Nik was even rejected by his close friend and Dipa leader, Marios Garoyian, for whom he had done so much, when the latter was in the political wilderness looking to revive his career. Not even his sense of gratitude would convince him to have anything to do with his buddy’s government.

THE WORST rejection passed almost unnoticed. Greece’s prime minister Kyriakos Mitsotakis met with Turkey’s president Tayyip Erdogan, after which both referred to a positive climate and resolve to avoid a repeat of last year’s tensions.

Mitsotakis, reportedly agreed to proceed the with EU-Turkey positive agenda, something that could not have gone down well in the capital of the regional superpower, where the government idea of blocking such a move at this week’s European Council were being circulated by our tough foreign minister. “At this time the situation does not favour a positive response, but there is still time ahead of the European Council,” said Christodoulides.

Before the Mitsotakis-Erdogan meeting, Nik spoke to the Greek PM and asked him to tell Erdogan that Turkey’s actions at Varosha must stop. Otherwise, the Cyprus Republic would not be able to adopt a positive stance at the European Council.

Nobody knows if Mits passed on Nik’s message to Erdo, but on Tuesday the latter suggested the Cyprob would not come between Greece and Turkey. “We agreed to mutual steps to support a positive agenda,” said Erdo and added: “We decided not to let third parties come between us.”

If the third party he referred to was our Nik, this would qualify as a mega-rejection by Mits, whom he had not even invited to join the broad acceptance government.

IRONICALLY, the most embarrassing rejection came from someone Nik rejected first – Emily Yiolitis, who decided to make public her letter of resignation as justice minister, which included the nasty insults she fired at the Prez during a rather heated telephone conversation they had.

The Prez had landed the first punches, forgetting – probably because the conversation was close to his siesta time – that Emily had an unrivalled talent for causing public relations disasters for herself. This time, however, the PR disaster also affected Nik, as the sharp-tongued Emily had no qualms about repeating everything, she told him in their telephone conversation.

And she posted her resignation letter on the internet during siesta time. Nik had told her that her presence in the council of ministers hurt the picture of the government and his own standing; he was paying the political cost of having her in the government. Did he not know that hell hath no fury like a woman scorned?

La Yioliti replied: “It is I who has suffered the cost, a heavy one indeed, by my acceptance to participate in a government, which you know well, was not held in high regard by society on issues of corruption and transparency.” And she would have been very happy to carry on suffering the heavy cost of being part of the discredited government, if Nik had not been so unkind to her on the phone.

WITH the cabinet’s Instagram style icon gone, the government has lost its glam factor and claim to broad acceptance. Emily may prove irreplaceable in this regard.

It was also reported that Nik’s daughters, who were very friendly with La Yioliti have unfollowed her Instagram account. Family comes first, as they say. It was only three weeks ago that Nik’s girls were guests of La Yioliti at her super-lavish, all-weekend birthday bash for her close friends, at Greece’s most expensive hotel in Vouliagmeni. We hope they soon make up because Emily deserves to be followed on Instagram. If I knew how to do it, I would follow her myself, in the hope of getting an invite to her next party.

ODYSSEAS has been betraying his autocratic tendencies with his latest Twitter outbursts against the investigative committee looking into the golden passports, because it dared to examine the failure of the audit office to carry out any checks on the scheme.

It had checked some files in 2016, but found nothing wrong, but took an interest after the Al Jazeera expose, probably after getting the go-ahead from that other corruption buster Junior. Interestingly, when the committee published the interim report Odysseas gave his public approval to it and informed us that he had been vindicated. It is always about him.

When the final report was handed to the president, the auditor-general heard from committee members that the audit office got a mention and he went ballistic. How dare the committee have been so disrespectful to the auditing deity. Without having read the report, he tweeted his objections and announced he would write to the relevant EU Commissioner reporting the committee for external interference and undermining the independence of the audit office, violating its terms of reference.

His spokesman toured the radio shows to didactically tell us that nobody could exercise any control over the audit office except the legislature. It is astonishing that someone like Odysseas, who criticises and intimidates whoever he chooses, in the name of transparency, finds legalistic pretexts to stop anyone bringing him into account.

From my limited knowledge, only fascist dictators use the law to stop people criticising them.

AFTER his brief stint as a film expert, the untouchable Odysseas has now decided to pose as a communications consultant, given his success as self-promotion. In a report about the infamous enlightenment campaign on the Cyprob, that is handled by the foreign ministry, the communications guru “observed ineffective utilisation of the provisions of the budget on enlightenment.”

He recommended that the foreign ministry should re-evaluate and modernise the way it promotes national positions, using social media, like he does. Is he not exceeding his powers in telling the executive how it should conduct its enlightenment campaign, which would be ineffective even if we set up a troll farm to promote our national positions? I suspect if he is not allowed to exceed his powers the independence of the audit office would be undermined.

ANTI-BRITISH sentiment that is endemic in Kyproulla has suddenly vanished. The perennial foe of Kyproulla – the duplicitous, back-stabbing British government – is suddenly being viewed as our potential saviour and we are begging it to put our country in the green category so that Brit tourists will arrive, fill our empty hotels and eat at our restaurants.

Even Prez Nik ended up pandering to Britain at the Queen’s Birthday Party on Wednesday referring to “our long-standing friendship and enduring bonds,” and highlighting the Cyprus government’s commitment to continue building on them. The Cyprob got a mention from the Prez but only as an afterthought, because we have a new Cyprob, which only the UK government can solve by putting Kyproulla in the green category so our much-loved Brit tourists can return and put a smile back on Cypriot faces.

ARCHBISHOP Chrysostomos also experienced the hurt of rejection last weekend. Six members of the Holy Synod snubbed the inaugural service at the newly-built majestic cathedral in Nicosia. The Archbishop of Athens took the trouble to attend, but not our top priests.

They did not show up to punish Chrys for blessing the Archbishop of Kiev Epiphanios several months ago in defiance of the wishes of the Russian Church. The six wanted Chrys to ignore the orders of the Greek Ecumenical Patriarch rather than anger the Russian church to which they feel much closer.

Phil meanwhile reproduced part of a sermon given by crackpot bishop Neophytos (he did not attend the service) just before Easter. “There are people of darkness of other religions, devil-worshippers, Satanists, fanatical Zionists, that want to bring confusion to holy days, especially those of the Orthodox, because the Church is one and true.”

If there is one guy deserving of rejection it is he.

Football is geometry in motion