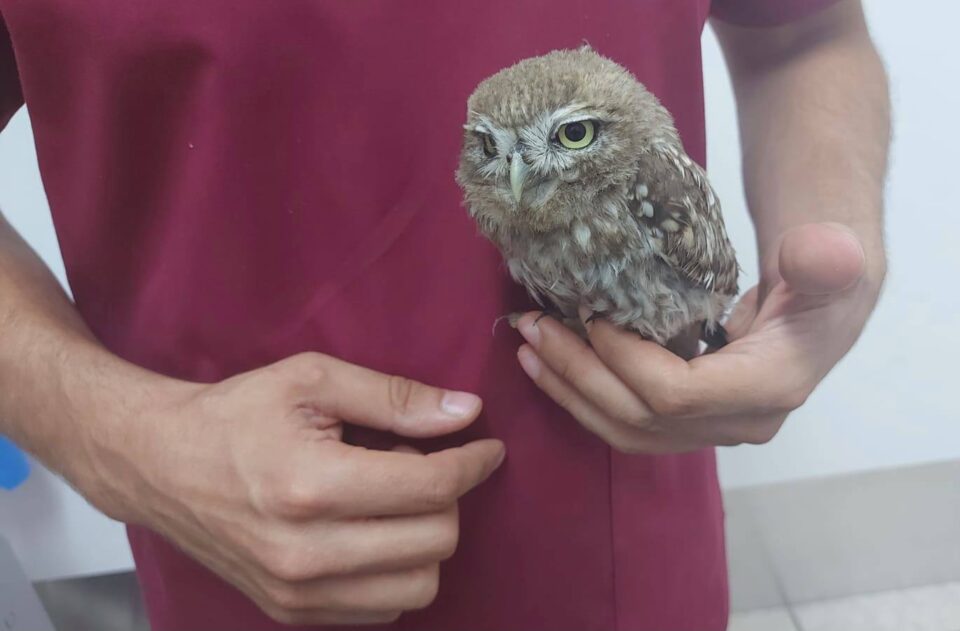 The baby owl rescued by CABS

Members of the Committee Against Bird Slaughter (CABS) have rescued a young owl that that had had a run-in with a dog and suffered a broken wing in Pyla, the NGO said in a Facebook post.

A kind member of the public reported the injured bird to CABS and their staff that was deployed in the area recovered it and took it to a sanctuary where it will be cared for until it is released back into the wild.

The anit-poaching organisation noted that more and more injured wild animals are being reported by the general public, which it sees as a good sign that reflects the slow but steady change in attitude towards nature and animals on the island.

According to BirdLife Cyprus there are more bird injuries specifically around this time of year because it is breeding season and baby birds are attempting their first flight.

The conservation organisation has some advice for people who come across a bird that may need help:

Firstly, handling a wild bird is extremely stressful for it and should be a last resort.

If necessary, to pick up a bird correctly use a cloth and firmly but gently “place your hand over the bird so its head is between your index finger and your middle finger while the rest of the hand is around the bird’s body” BirdLife says. If the bird is too large each hand should be placed over the bird’s wings. Be wary of claws and avoid touching a bird’s beak.

If the bird is a hatchling or nestling (without feathers or with fluffy down feathers and possibly closed eyes), then it should be put back in its nest. If there is no nest, make one from a cardboard box or basket and place grass, newspaper, or paper towels in the bottom. If using a box, poke holes in it for ventilation. Leave the box somewhere safe and warm during winter or cool during summer, but within hearing distance of where the bird was found. Within two hours if the parents return to feed it, then your job is done. If not, contact the game and fauna service or BirdLife.

A fledgling (a bird which has naturally left the nest and has short adult-like feathers) should not be handled unless in immediate danger. If it is in immediate danger, carefully move it to a safe nearby spot, such as a bush where the parents can hear it. If there are pets present they should be kept indoors.

Swifts, swallows, barn swallows and house martins should be placed on a high ledge. If they fly away, your job is done. If they do not, call the game and fauna service.

It is illegal to bring a baby bird home to raise. Most young birds will not survive and those who do will miss out on survival lessons, like how to find food and water and avoid predators, BirdLife warns.

While BirdLife Cyprus is able to offer some first aid to injured birds, they say “as a conservation organisation we do not deal with animal welfare matters, we are not a rehabilitation centre and have no facilities for keeping birds in captivity, regardless of species or reason. For this reason, we are not able to assist with a bird that needs veterinary or captive care.”

The Game and Fauna Service has a rehabilitation centre where it treats injured birds and the wardens there are the most appropriate people to treat such wild birds. One should contact them at +357 22867786 and wait for them to collect the bird.