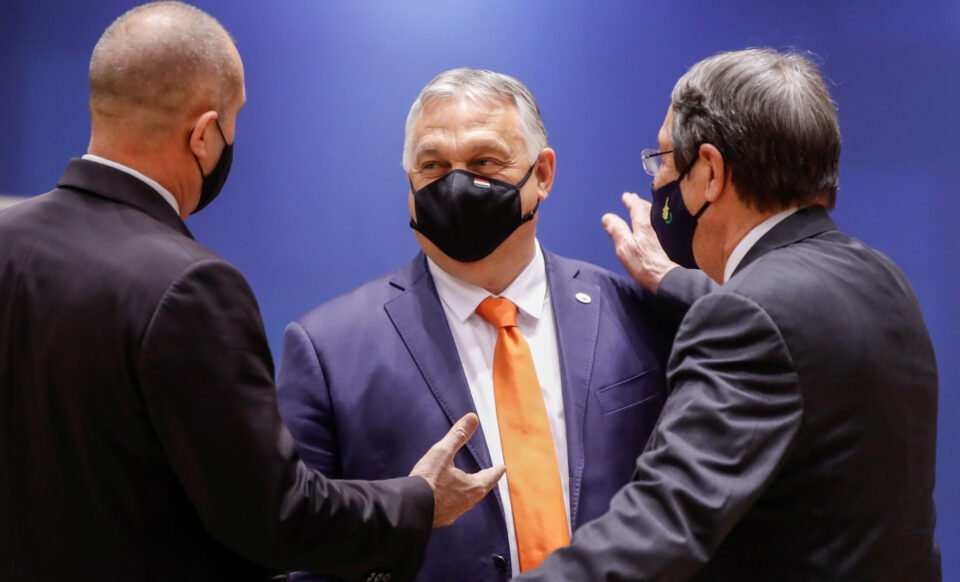 Hungarian Prime Minister Viktor Orban stands with Cyprus President of the Republic Nicos Anastasiades at the start of a European Union leaders meeting on the first day of the EU summit in Brussels, Belgium, June 24, 2021. Olivier Hoslet/Pool via REUTERS

The European Council is set to offer Turkey “readiness to engage” in “a phased, proportionate and reversible manner” while remaining fully committed to a comprehensive settlement of the Cyprus problem based on a bicommunal, bizonal federation with political equality, according to an advance final draft of the summit’s conclusions revealed on Thursday.

The Council also underlines the importance of the status of Varosha and calls for full respect of United Nations Security Council Resolutions, in particular Resolutions 550 and 789, the Cyprus News Agency reported.

It regrets that the informal meeting in Geneva under UN auspices did not pave the way for the resumption of formal negotiations. The European Union will continue to play an active role in supporting the process, the draft adds.

Further on, the draft welcomes the de-escalation in tensions in the eastern Mediterranean, and reiterates the EU’s readiness to engage with Turkey in a phased, proportionate and reversible manner to enhance cooperation in a number of areas of common interest, subject to the established conditionalities set out in March and in previous European Council conclusions.

On the sidelines of the EU Council, President Nicos Anastasiades and other EU leaders held a working lunch with UN Secretary General António Guterres.

In a written statement later, the government spokesman said Anastasiades reiterated to Guterres the need to maintain a de-escalation in the seas around Cyprus, as well as the need to avoid further provocative actions in Varosha.

The president also referred to the upcoming visit of Turkish leader Tayyip Erdogan to the north of the island, noting that his presence there could hold in store an announcement creating new facts on the ground.

Anastasiades said he remains committed to a resumption of substantive talks on Cyprus, based on UN Security Council resolution and EU values.

He noted with regret that Turkey and the Turkish Cypriot leadership insist on the international community recognising the north of the island as a sovereign nation and on a two-state solution for Cyprus.

On his part, Guterres assured Anastasiades that, despite any difficulties ahead, he would continue his efforts to create the necessary conditions for a substantive dialogue.

The EU Council wraps up on Friday.

Meanwhile Turkish Cypriot leader Ersin Tatar will be meeting with the UN chief in Brussels on Friday, at 12.30pm Cyprus time.

According to the Cyprus Broadcasting Corporation, in remarks on Thursday Tatar said he stands ready for another informal meeting to discuss the Cyprus issue, modelled on the one that took place in April – and which ended in deadlock.

The CyBC said Tatar would explain to Guterres “how the circle can be squared” on Cyprus.