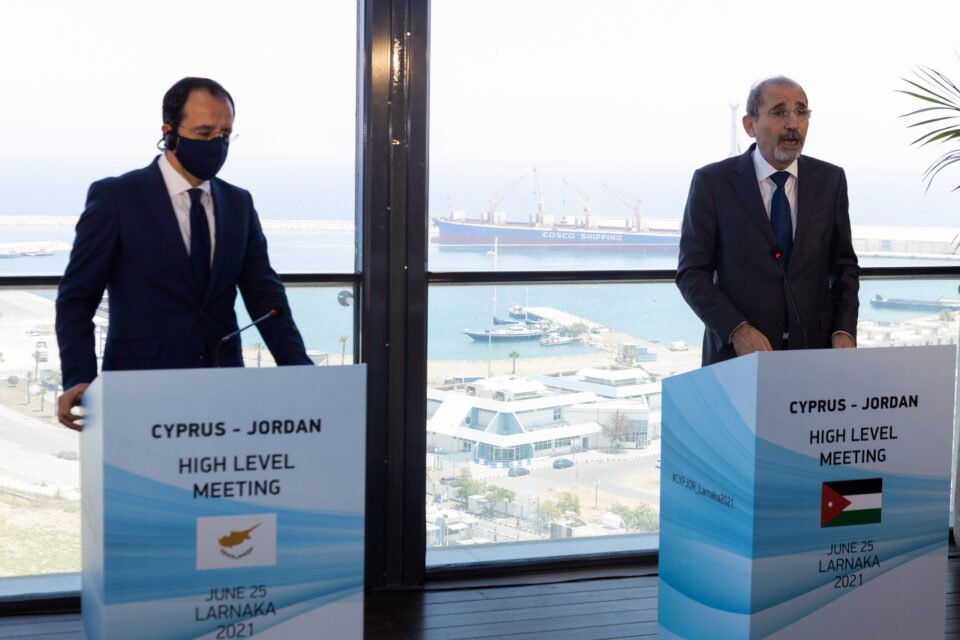 Foreign Minster Nikos Christodoulides, and the Deputy Prime Minister and Minister of Foreign Affairs and Expatriates of the Hashemite Kingdom of Jordan, Ayman Al-Safadi (PIO)

The minister also said that the King of Jordan, Abdullah II is expected to visit Cyprus soon

“Our goal and pursuit is the cooperation of all states in the region with respect towards sovereignty and territorial integrity,” said Christodoulides.

He said there were signs that ISIS was regrouping, and the international community must work together to prevent “a dreadful outcome”, he said.

To develop regional cooperation, ideas were exchanged for the tripartite collaboration between Cyprus, Jordan, and Greece during the meeting, Christodoulides said.

“The EU must be…active in this part of the world, which is also in its neighbourhood and is of great geostrategic importance,” he added.

He said Cyprus supported Jordan because it was a reliable European partner.

Al Safadi in his comments stressed his country`s steadfast position that the Cyprus problem needs to be solved on the basis of the UN resolutions and international law. He also thanked Cyprus for its positions as regards the development of the relations between the Kingdom of Jordan and the EU.

Referring to  the bilateral relations between Cyprus and Jordan, he noted that they are two states connected with longstanding, historic and strong relations.

“We are two neighbours that are interested in achieving peace and stability in our region,” he noted ,speaking through an interpreter, adding that this cooperation can be further developed in various fields to the benefit of both countries as in the trade sector.

He also referred to tourism and the need to develop tourist relations, expressing hope that Jordan would be removed from the “red list” of countries so that tourist flows will be facilitated.