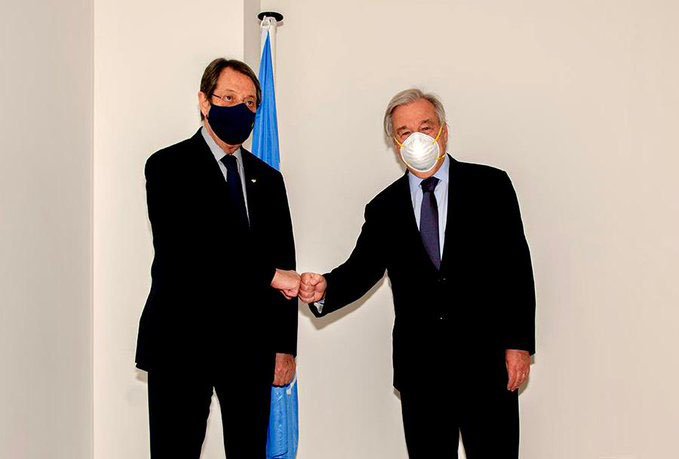 A two-state solution in Cyprus is a non-starter, UN Secretary-General Antonio Guterres said, according to President Nicos Anastasiades, who met with the UN chief on Friday in Brussels.

According to Anastasiades, Guterres told him that a two-state solution was a “non-starter”, clarifying that the terms of his mandate were clear and provided for a solution based on a bicommunal, bizonal federation (BBF), with political equality in accordance with the relevant United Nations resolutions.

“He acknowledged that the Turkish positions were hampering efforts to resume talks but said that he would continue to work to create the conditions for a meaningful dialogue,” Anastasiades said.

The president said he told Guterres that the Greek Cypriot side agreed with his proposal, as submitted at the informal summit in Geneva last April, for the appointment of a special representative for the Cyprus issue and expressed the hope “that it will receive a positive response from Turkish Cypriots and the Turkish side.”

Tatar said earlier in the week that he had rejected Guterres’ proposal  for the appointment of a special representative to work on a four-point package based on the settlement framework which had been tabled by the UN Secretary-General at the Crans- Montana talks in 2017. He said he rejected it because it would send the wrong message as Turkish Cypriots would find themselves involved in a process in which their sovereignty would not be accepted.

On the possibility of another informal summit on Cyprus, Anastasiades said this was up to Guterres.

Anastasiades said he has proposed to Guterres a substantive dialogue, instead of another such summit in search of common ground. “Because, as I have emphasised, the common ground exists, it is contained in the UN resolutions,” he added. He also reiterated the confidence-building measures (CBMs) he had suggested last December and at the Geneva summit.

“I cannot predict what the next steps of the Secretary-General will be and when he might convene (a summit). He will either appoint a special representative or convene a new informal five-party meeting,” Anastasiades said.

He also said that what was being sought by a summit convened by Guterres “is to make Mr. Tatar realise that it is not possible to put forward positions that contradict the UN resolutions, or the terms of the Secretary-General’s mandate.”

Tatar, who has been calling for recognition of the north’s sovereignty to participate in substantive talks, told Guterres during their meeting that respect for the sovereign equality of the two sides and recognition of their equal international status was inevitable for the start of formal negotiations. Tatar’s office said in a statement that the Turkish Cypriot leader said negotiations on this new basis could have a chance of success.

It added that Tatar said that at the confidence building measures (CBM) proposed by the parties should not overshadow efforts to find common ground between the two sides. According to the statement, Guterres agreed that CBMs cannot replace a comprehensive solution, but must serve the solution.

President of the EU Commission Ursula von der Leyen, speaking to the press in Brussels after the EU summit, in response to a question, said, the EU would “never accept” a two-state solution to the Cyprus problem.

She said she had spoken Turkish President Recep Tayyip Erdogan “and I was very clear. We know that he intends to go to Cyprus in mid-July. This is a very sensitive issue for us and we have made it clear that we will be watching how the visit will go.”

And that, she added, “we will never, but never as EU, accept the two-state solution to the Cyprus problem.”

“I sent these clear messages personally to President Erdogan and it is up to him to send the positive messages,” von der Leyen said.

Anastasiades also welcomed the agreed text of the EU leaders at the European Council that took place on Thursday and Friday in Brussels, on the Cyprus issue, which among other things, states Turkey’s obligation to maintain de-escalation in the Eastern Mediterranean.

The final text of the European Council conclusions was adopted by the EU leaders on Thursday evening.

“We welcome the agreed text on Turkey, which reiterates the position of EU27 on the Cyprus issue, the status of Varosha and in general the whole spectrum of EU-Turkey relations, including the need to sustain de-escalation in the Eastern Mediterranean,” Anastasiades tweeted Friday.

He said that the conclusions also offer the tools for tackling Turkish provocations in Varosha.