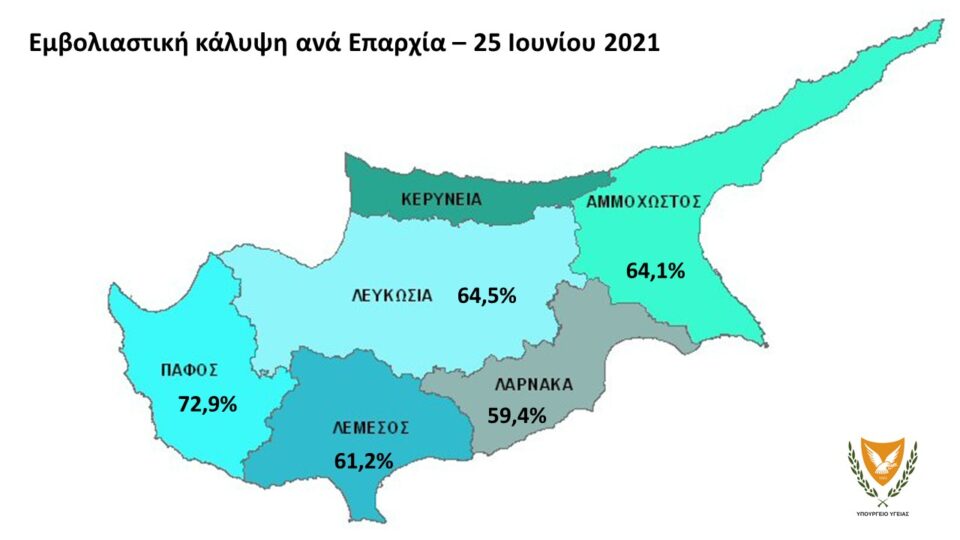 About 35 per cent of people aged 20 to 29 have now received at least one dose of the coronavirus vaccine, while almost 48 per cent of the adult population has completed their vaccination, the health ministry said on Saturday in yet another call on the public to get vaccinated.

Another outbreak of the virus will have “catastrophic consequences” for the country’s economy, the ministry said in a written statement accompanied by the recent vaccination data.

Despite the increase in coverage, the ministry repeated its concerns over the low interest among young people in getting vaccinated against Covid-19.

Only 27.3 per cent of those aged 18 to 19 have received at least one dose of the coronavirus jab, a slight increase from the 25.8 per cent last week. Vaccination coverage in people aged 20 to 29 has reached 35.1 per cent compared with 32.9 per cent last week.

Meanwhile, more than half, 52.3 per cent of those aged 30 to 39 have received at least one coronavirus jab dose, the ministry added.

The percentage of vaccination coverage is higher in the older age groups, with 72.5 per cent of 40 to 49-year-olds having been vaccinated, while slightly fewer of the 50 to 59 age group have received the jab, counting 71.6 per cent.

People aged 60 to 69 have showed more interest in vaccinations, as 81.6 per cent of them received the jab, and 91.3 and 91.8 per cent of the 70 to 79 and people aged 80 and older have also been vaccinated against Covid respectively.

The break-down in the various districts has Paphos coming first with the highest vaccination coverage at 72.9 per cent, followed by Nicosia with 64.5 per cent, Limassol with 61.2 per cent while 59.4 per cent of Larnaca’s population has received at least one dose of the vaccine.

“The high vaccination coverage on people aged 40 and older led to a significant reduction on the number of cases in those ages,” the health ministry said.

Hence, the attention has turned to younger people, who constitute more than 75 per cent of the new cases. Of those, 43 per cent are unvaccinated people aged 18 to 39.

Increased hospitalisations of young people have also been recorded according to the health ministry who said that “in many cases they are treated in the ICU or high dependency units”.

The median age of people in the hospitals is at 54 with more than 90 per cent of patients being unvaccinated, the ministry added.

The health ministry highlighted the need for vaccinations to end the health crisis, by referring to the danger of the spread of the Indian variant as well as the need to make Cyprus a safe travelling destination and support the tourist industry.

Citing studies in England and Scotland, the ministry said that the Delta (Indian) variant is more contagious than the Alpha (British) variant and that in the case of infection, unvaccinated young people are faced with double the risk of serious illness and hospitalisation.

According to the ECDC, both doses of AstraZeneca or Pfizer vaccines have respectively 92 and 96 per cent effectiveness against hospitalisation.

Vaccinations will also contribute to the safe operation of business and social activity, the ministry said.