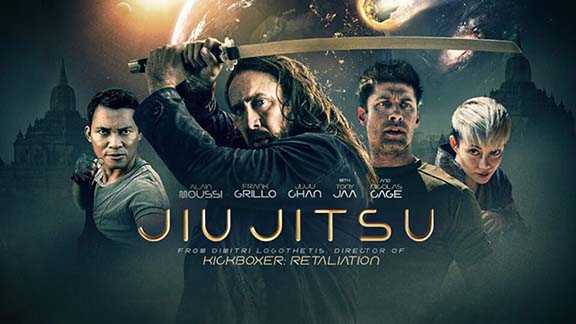 Jiu Jitsu racked up around 6,000 hotel nights for its cast and crew, employed dozens of people and built a set (using local contractors) that cost around €300,000, among other expenses

The Cyprus Mail has obtained further details of the lawsuits regarding Man of War and Jiu Jitsu, two films by Hollywood producer-director Dimitri Logothetis, financed under the cash rebate scheme launched by the Ministry of Finance and Invest Cyprus.

First, though, we need to make clear that the Cyprus government was in no way a producing partner on these films. That’s not how a rebate scheme works. Our government hasn’t sunk a single cent into the production of Jiu Jitsu (the production of Man of War has now been aborted, at least in Cyprus).

A rebate scheme involves the island being used as a location, a place to shoot a movie – and, since productions bring in money, up to 35 per cent of eligible spending is then reimbursed under the scheme. Jiu Jitsu, for instance, which was shot in 2019, racked up around 6,000 hotel nights for its cast and crew, employed dozens of people and built a set (using local contractors) that cost around €300,000, among other expenses. The producers ended up claiming a rebate of around €8 million.

Almost two years after shooting was completed, that money still hasn’t been paid – even though the film was released in the interim, and became something of a cult sensation on Netflix.

That non-payment, however, isn’t the main subject of the lawsuits being brought by Logothetis and his fellow producers – if only because the money is owed not to them but the film’s investors, who may decide to launch their own legal action.

The lawsuits mostly pertain to Man of War, which was approved – in terms of its cash rebate certificate – in spring 2019, at the same time as Jiu Jitsu, and was due to be shot in Cyprus after that film was completed.

There are two lawsuits, one for defamation and one alleging negligence. The defamation suit relates to comments made in a report by the auditor-general, dated March 26, casting aspersions on the honesty of Logothetis and his team, as well as earlier comments on Sigma TV which suggested a link to the ‘golden passport’ scheme. (For the record, Logothetis holds both Greek and American nationality.) Both Sigma and the audit office are among the defendants.

The alleged defamation is important, because “the recent adverse comments made in the media by the auditor-general” were one of the reasons cited by CDB Bank in its decision to pull out of funding Man of War. The others were the non-payment for Jiu Jitsu, and “the increased uncertainty in relation to the filming scheme” in general.

The second lawsuit, however, is the big one, blaming the government for the collapse of the Man of War shoot. “Apart from the money that had been invested, we’re also asking for money they’ve failed to gain as profit,” explains Yiannos Georgiades of Y. Georgiades & Associates LLC, the law office representing the plaintiffs. The damages, he adds, could be in excess of €30 million.

Georgiades goes even further, alleging that Logothetis was “deceived” by officials. He speculates that our government got cold feet over the scheme and purposely tried to sabotage Man of War from being shot in Cyprus:

“They were probably trying to escape from being committed to pay for the second film, but without looking like they were to blame – in other words, by creating the circumstances where either Dimitri will decide not to do it, or no bank will finance him. And the other motive it seems they had was to please the auditor-general, who was investigating the matter.”

To cut a long story short, Man of War received a rebate certificate for around €15 million (its budget was about twice Jiu Jitsu’s). Despite his bad experience with the first film – “It has never taken me more than 11 months from TV or film completion to collect a tax or cash rebate anywhere I’ve shot in the world!” he complained in a letter to the finance minister, dated April 9 – Logothetis decided to go ahead with a second one, and returned to Cyprus in November 2020 to begin pre-production and find locations.

He proposed two improvements, based on his experience of Jiu Jitsu. First, the rebate certificate should be bankable, ie capable of being used as collateral to obtain funding. Second, the rebate should be given out in interim payments, instead of a single payment which might be delayed excessively.

The government agreed, but, since the scheme was now being changed to include these conditions, Logothetis and his fellow producers were told they had to re-apply from scratch for a new certificate.

“They tried to convince him by exerting pressure,” claims Georgiades. “They told him it’s a matter of formality”, and that it was “for his benefit”. When Logothetis reluctantly agreed to re-apply, however (and this is where the ‘deception’ mentioned by his lawyer comes in), he discovered that the new certificate had been reduced by around €11.3 million, making it virtually useless and triggering the bank’s decision to pull out.

“Under these circumstances,” wrote Georgiades to the chairman of the Filming Plan Assessment Committee (FPAC), in a letter dated May 28, “[Logothetis] didn’t have any other choice but to stop the production of Man of War in Cyprus.”

This version of events is disputed by Nayia Symeonidou, a finance ministry official who’s also a member of FPAC.

Logothetis “wanted the new scheme to apply to an application that had been made previously, which wasn’t possible,” she told the Cyprus Mail. “He decided that he wanted to take advantage of the new rules, so he re-applied. No pressure was exerted on him by anyone.” She also disputes the figure of €11.3 million, admitting only that the rebate in the new certificate was “a little lower”.

Symeonidou also ascribes the ongoing non-payment of the Jiu Jitsu rebate to incomplete documents being supplied by the producers, who she says were still submitting material as late as October 2020. “There were some gaps. We informed the applicants, and we’re now in the process of announcing our decision.

“As is always the case in the Republic, when you’re paying out public money you have to carry out exhaustive checks, down to the very last cent. Because this money is the taxpayer’s money, and those who administer it have a responsibility down to the last cent.”

The two sides don’t seem to have much common ground, which is often a problem in these situations. A similar impasse may be seen in the auditor-general’s report, which made a big deal of the Jiu Jitsu money going largely to companies owned by the producers – but, as Georgiades notes, even though the money is invoiced by those companies it goes directly to an escrow account held by a lawyer, who then distributes it to the actors’ agents. “I saw it with my own eyes.”

After all, he asks with a certain exasperation, don’t the film’s investors do their own due diligence? Are they really waiting for our auditor-general to ‘reveal’ that Logothetis and Co are ripping them off? “This is a stupid thing to think.”

In the end, the bottom line is that Man of War is not being shot here, Logothetis has gone back to America, and our film rebate scheme lies in ruins. Meanwhile, as he notes in a Zoom call from Los Angeles, “Right across the water, Greece is making 18 movies this year. Tom Hanks is making a movie there… They’ve got a bankable cash rebate, they pay on time, they’ve been doing it for the last three years”. Given how many countries have successful, established rebate schemes (Ireland, Malta, Greece, Romania, to name just a few), and given our dire financial situation post-Covid, it may be time to reconsider how we do things.

If indeed it’s not too late.

At Soffos, AI developers find a culture that fits