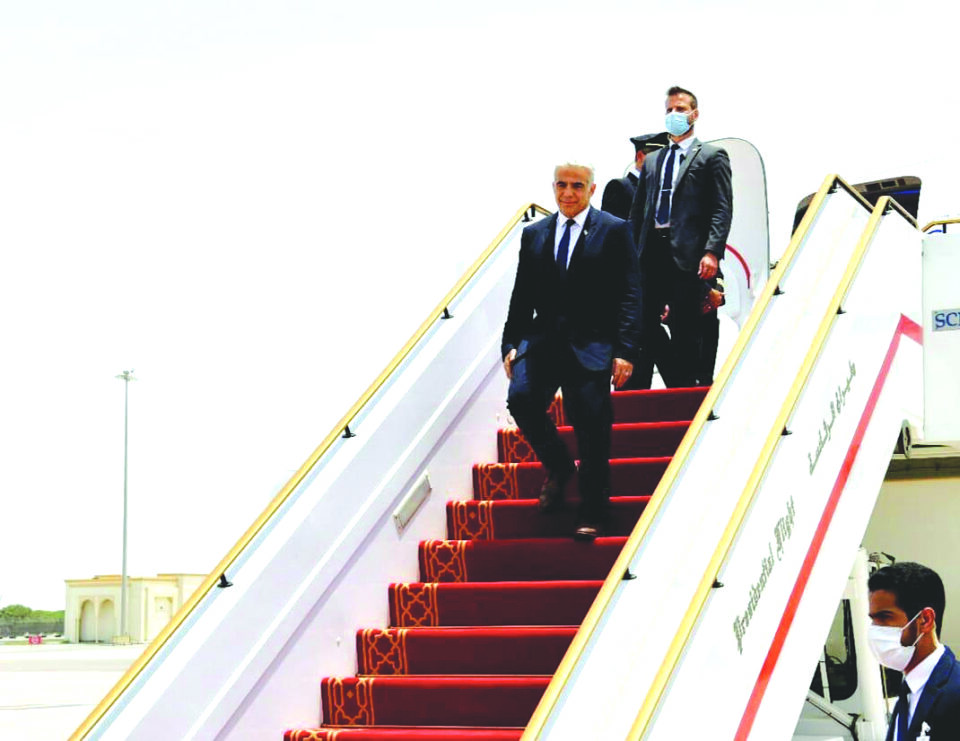 Israel’s new foreign minister inaugurated its embassy in the United Arab Emirates on Tuesday and offered an olive branch to other former adversaries, saying: “We’re here to stay.”

During his two-day visit, the first to the Gulf power by an Israeli cabinet minister since the countries established ties last year, Yair Lapid was also due to inaugurate a consulate in Dubai and sign a bilateral agreement on economic cooperation.

The trip is an opportunity for the two-week-old Israeli government of Naftali Bennett, a nationalist who heads an improbable cross-partisan coalition, to make diplomatic inroads.

“Israel wants peace with its neighbours – with all its neighbours. We aren’t going anywhere. The Middle East is our home,” Lapid said during the ribbon-cutting ceremony at the Abu Dhabi high-rise office serving as a temporary embassy.

“We’re here to stay. We call on all the countries of the region to recognise that,” he said, according to a transcript.

Brought together by shared worries about Iran and hopes for commercial boons, the UAE and Bahrain normalised relations with Israel last year under so-called “Abraham Accords” crafted by the then U.S. administration of President Donald Trump.

Sudan and Morocco have since also cultivated Israel ties.

Tuesday’s agreement will be the 12th between Israel and the UAE, Lior Haiat, spokesman for Israel’s Foreign Ministry, said. Lapid is also set to visit the site of Expo 2020 Dubai, a world fair opening in October where Israel has built a pavilion.

Lapid’s plane transited through Saudi airspace. Riyadh, although not having normalised relations with Israel, last year opened its skies to Israel-UAE flights.

The UAE formally opened its embassy in Israel, temporarily located in the Tel Aviv stock exchange, to little fanfare this month.

Signalling Israel’s haste to cement relations, the Abu Dhabi embassy still has only three diplomats and a head of mission, Eitan Naveh, who has yet to be confirmed as full ambassador. The consulate in Dubai is similarly located in temporary premises.

Lapid was also conciliatory toward former Israeli Prime Minister Benjamin Netanyahu, whose attempts to organise a trip to the UAE while in office were scotched by COVID-19 restrictions and who has sought to cast his ouster by Bennett as illegitimate.

Thanking Netanyahu as “the architect of the Abraham Accords and who worked tirelessly to bring them about”, Lapid said: “This moment is his, no less than it is ours.”

The Israeli foreign minister also thanked Trump and U.S. President Joe Biden, who has pledged to try to expand the circle of Arab and Muslim countries that recognise Israel.

TUI cancels flights to Cyprus, other destinations to July 4