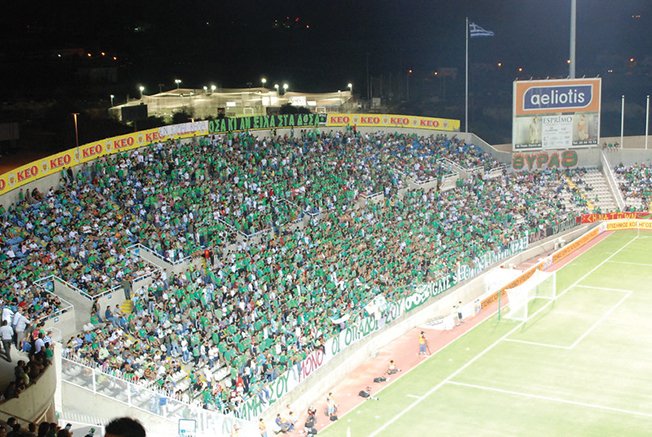 The north stand at the GSP where most of the Omonia fans would concentrate during a game (photo: George Groutas)

Cyprus champions Omonia were looking for a home stadium on Thursday around 20 days before their first European qualifying fixture after being evicted by the GSP in Nicosia over a €300,000 debt the Nicosia side has refused to pay, as it sought to negotiate a better deal.

The GSP has also notified all other stadiums and the Cyprus Sports Organisation and has asked them not to host Omonia as that would allow a debtor to avoid meeting their obligations.

The chairman of the board of GSP, Doros Ioannides, said no solution could be found with a team that owed €300,000 and would not pay, wanting a new deal.

Ioannides said since the pandemic began, Omonia has not paid a cent.
“I am no longer discussing this, Omonia is finished for the GSP,” Ioannides told sports portal Protathlima.com.

Ioannides also accused Omonia of lying when it claimed the GSP had given another Nicosia side which uses the stadium a better deal.
Omonia did not name the club, but it was assumed it was talking about arch-rivals Apoel. Ioannides said both clubs were charged the same, around €7,500 per game.

Ioannides said they could not be talking about the third Nicosia side, Olympiacos, because it was a smaller team with less revenues and therefore it got fewer benefits.

The board chairman said Omonia wanted to manage the concession stands during its games, among other things.
“Where would GSP find the money I wonder,” Ioannides said. “The expenses are high; lawn maintenance, electricity, other operational expenses, this cannot happen.”
But it can survive with Apoel and Olympiacos alone, he said.

He denied the charges were too high, arguing they were low compared with what the stadium provided.
The GSP had also cut its fees from €7,500 to €4,000 per game during the pandemic when fan attendance was banned.

Omonia is currently in training camp in Poland, ahead of their Champions League qualifying campaign.
If Omonia qualifies, it will have a problem as the GSP is the only stadium deemed suitable by Uefa for Champions League playoff and group games.