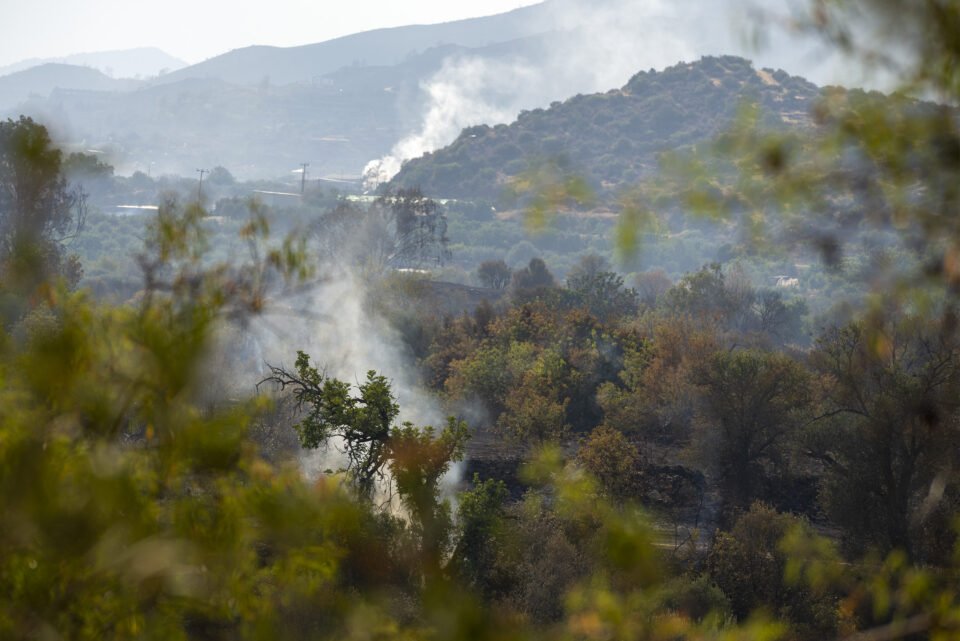 The huge forest fire in the south-eastern foothill of Troodos was declared under control on Monday morning after killing four people, caused millions in property damage and devastating damage to the environment that would at best take decades to recover if at all.

The fire left behind it a charred landscape spanning around 55 square kilometres, which included houses, businesses, pine forest, crops, and left 10 communities reeling. It was, the government said, the worst fire in living memory.

Four men, Egyptian nationals who came to Cyprus for work, died in the flames with unions demanding answers regarding their living and working conditions.

In the aftermath of the catastrophe, which surpassed that of Solea in 2016 that burned around 18 square kilometres, observers suggested Cyprus was once more caught unprepared with coordination lacking and first responders delaying tackling the fire.

Authorities argue that the scale and speed of the blaze was unprecedented, on top of forces being busy in two other fires in Limassol and Nicosia at the time.

Against this backdrop, the government also faced criticism over its apparent failure to implement certain recommendations made after the Solea fire, including the procurement of two larger firefighting aircraft.

The fire service was notified of the fire at around 2pm on Saturday. It appears to have started at an orchard just outside the village of Arakapas, just before jumping into nearby dry reeds and spreading along the valley at high speed.

Police arrested a 67-year-old man on suspicion of starting the fire. He has denied any wrongdoing.

Fanned by strong winds, the fire raced through a largely forested area, destroying everything in its path, including homes and businesses. It travelled eight kilometres in around five hours over a perimeter of several kilometres. By comparison, the Solea blaze destroyed 18 square kilometres in four days.

As early as Saturday afternoon, forestry department director Charalambos Alexandrou said it would be impossible to tackle without help from outside. Help was sought but firefighting aircraft from Israel and Greece did not get into the action before Sunday.

Alexandrou said Monday it was impossible to deploy forces across the entire front since the fire engulfed Arakapas in about 10 minutes.

The forestry director said the terrain in the area, a valley, the mountains, ravines, and lush vegetation, was catastrophic.

Alexandrou said there was accumulation of dry vegetation which enabled the flames to pick up speed at a wide front.

The abandonment of farmland in recent years, which used to act as a fire break, meant that the area filled with large solid sections of vegetation that acted as fuel.

He said having more firefighting aircraft would have helped on Saturday, but it will be another couple of years before the forestry procures two more small planes.

Ten aircraft – helicopters and two small planes — were flying sorties on Saturday, assisting some 600 firefighters on the ground with 70 firefighting vehicles, 14 bulldozers, as well as tractors, excavators and water tankers.

Two British bases helicopters were part of the effort while RAF Akrotiri was being used by Cypriot aircraft to refuel.

The commander of the British forces in Cyprus General Rob Thomson expressed his solidarity with the Republic.

“The thoughts and prayers of all of us here in British Forces Cyprus are with the people of Cyprus during this incredibly difficult and testing time,” Thomson said.

“We stand shoulder to shoulder with the Republic of Cyprus as we work together to overcome this tragedy.”

Kettis said the service had been issuing warnings for days and people should have been careful.

Residents of the area who had to evacuate their homes spoke of lack of coordination and delay in the response.

It should be noted however that two other fires in Limassol and Nicosia had broken out just before and had to be dealt with. In one, near Pareklishia, police arrested a 25-year-old man on suspicion of arson.

Former fire chief Marcos Trangolas said the strong winds combined with the point of origin played a key role in how the blaze developed.

Trangolas said the speed did not leave much room to the authorities to react.

An elderly couple living in Odou had called the police at the time who told them to stay put. They decided against it and got in their car and drove through the flames to get out. They reached Vavatsinia where people appeared oblivious to the imminent danger.

In Vavatsinia they were ringing the church bells to notify people to evacuate. Trangolas said a phone text system would have been much more effective in alerting people.

Questions emerged as to the state’s ability to tackle large fires and the apparently unfulfilled pledges that followed the Solea fire.

Among the decisions at the time was the procurement of two large firefighting planes like the ones dispatched by Greece on the weekend and of a cutting-edge mobile coordination centre.

The aircraft never materialised while a proposal by former Cyprus’ European commissioner for human aid and crisis management to base an EU firefighting force on the island to cover the region was rejected by the Commission.

The tenders for a mobile coordination centre have been cancelled twice over the cost and other technical issues.

Trangolas said there was a need to increase the number of aircraft. The aim is to have enough to patrol the skies on high-risk days so that they can intervene immediately if necessary.

“We were not ready for the worst scenario,” he said.

The government denied the response to the fire was slow, arguing that under the circumstances, the state mechanism’s reaction was effective.

“Despite the scale of the damage, it is certain that any failure in the reaction would have had infinitely more tragic results,” government spokesman Marios Pelecanos said in a statement.

The fact that it was put under control in 24 hours, he said, was due to the professionalism and self-sacrifice of frontline units and to the significant improvements in equipment and methods in recent years.

Any gaps will be identified and filled, Pelecanos said.

Pelecanos said aircraft have also been procured, referring to the two small ones operated by the forestry department. There was no recommendation concerning the type, he said. A committee later recommended the type that was acquired eventually.

Since 2016, four drones have also been acquired. They were used for the first time on Saturday night to map all the fires, helping crews draft their operational plans.

“We are not trying to communicate the impression that there is nothing that needs improvement,” he said.

President Nicos Anastasiades will chair a meeting on Monday, which had been scheduled before the fire to discuss such matters.