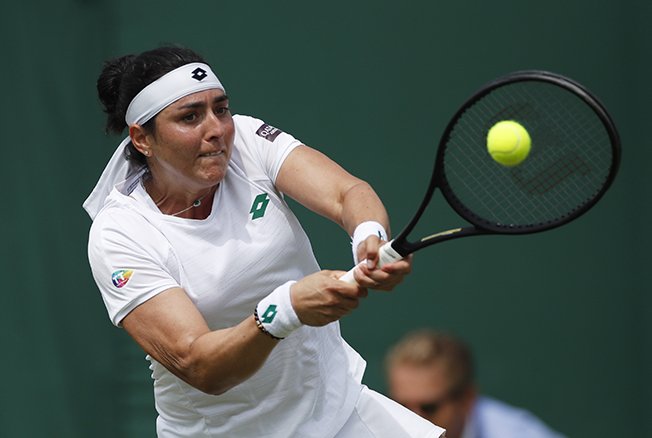 Tunisia's Ons Jabeur is the first Arab player, man or woman, to reach the last eight at the All England Club since 1974

Ons Jabeur is setting new benchmarks for Arab women on the tour this season and will look to continue her fairytale run at Wimbledon when she meets second seed Aryna Sabalenka in the quarter-finals on Tuesday.

Jabeur, the Tunisian number 21 seed, came back from losing four games in a row in the opening set to overpower 2020 French Open champion Iga Swiatek in Monday’s last-16 encounter.

She became the first Arab player, man or woman, to reach the last eight at the All England Club since 1974.

Having notched up a historic win for her country, Jabeur continued her celebrations with several fans waving the Tunisian flag on the sidelines.

“Tunisians are everywhere, I got to say,” Jabeur said. “They were singing actually a football song. I felt the need to sing with them also. I hope they come in more numbers for the next match.”

With only two of the top-12 ranked players featuring in the last eight of the tournament, Jabeur sees no reason why she cannot win her maiden Grand Slam title this weekend.

“My goal is to break this quarter-final and be able to go to the semi and why not the final? I’m enjoying my time here in Wimbledon, enjoying the grass a lot,” she added.

Sabalenka also finds herself in unfamiliar territory having booked her place in a Grand Slam quarter-final for the first time in her career.

After taking down Elena Rybakina, Sabalenka was quick to praise Jabeur as each woman bids for their first major semi-final. The pair have split two previous meetings.

“She has good touch, good serving game, moving well,” Sabalenka said. “I also have a good serve, play aggressive. (I’m) kind of trying to use my touch also.

“It’s going to be great battle.”

Angelique Kerber, the only former champion left in the women’s draw, will take on Czech Karolina Muchova in a battle of powerful hitters on Court One.

Another Czech, Karolina Pliskova, will take confidence from ending Liudmila Samsonova’s 10-match unbeaten run on grass to reach the quarters.

Currently ranked world number 13 — outside the top 10 for the first time in nearly five years — Pliskova is hoping a deep run at Wimbledon can give a second wind to her career.

Up next for Pliskova is another quarter-finalist who is enjoying a career-best performance at Wimbledon.

Switzerland’s Viktorija Golubic had never got past the third round of a major before this fortnight, but the world number 66 continued her impressive season by defeating Madison Keys in the fourth round.

In a women’s draw full of surprises, world number one Ash Barty started as the favourite and still remains the player to beat at the business end of the tournament.

The Australian has dropped just one set in the opening four rounds and will meet 75th-ranked compatriot Ajla Tomljanovic for a place in the semi-finals.

Order of play on the main showcourts on the eighth day of the Wimbledon championships on Tuesday (play starts at 1230 GMT unless stated, prefix number denotes seeding):

Mending our clothes: to darn or to patch?