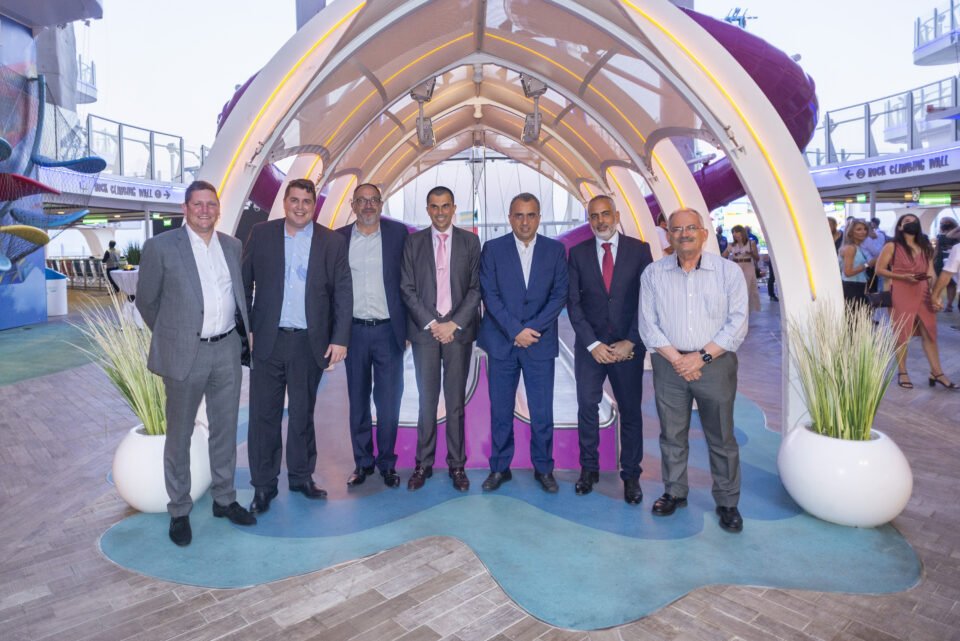 Officials aboard the Harmony of the Seas

Treacy said the company has plans to include Limassol as a port of call for the Rhapsody of the Seas’ 2022 summer schedule “allowing thousands of travellers to visit this incredible island.”

He was speaking late on Thursday on the Harmony of the Seas cruise ship, currently at Limassol port, where he met deputy minister of tourism Savvas Perdios, deputy minister of Shipping Vasilis Demetriades and health minister Michalis Hadjipantelas as well as the district’s mayor Nicos Nikolaides.

“Cyprus is a beautiful cruise destination and this beautiful island, its culture and its hospitable people are just waiting to be discovered, no matter the season,” Treacy said.

The island offers people the opportunity to experience something new, interesting and exciting, with adventure activities and cultural customs among the many points of interest, the vice president said, adding that “our customers are very excited to…discover new destinations”.

Jewel of the Seas carried out a two-day pilot cruise with hundreds of travel agents from Europe “who were thrilled by the experience”.

On behalf of cruise operator company, Treacy thanked the government and local authorities for its support to the industry “and especially to Royal Caribbean International all the previous months”.

He also spoke warmly about Cypriot hospitality, port facilities and the degree of implementation of the health protocols.

Deputy minister of tourism Savvas Perdios said that the government has been trying for the last three years to constitute Cyprus as a cruise base for international companies.

Perdios thanked all the stakeholders, who worked for up to 10 months to establish the protocols that would facilitate Royal Caribbean to bring its ships to the island.

Highlighting that Cyprus is not just ideal for summer holidays at the beach, he said that “we have been working for the last two years to improve our tourism product, putting emphasis on authentic experiences and products of special interest.”

The aim, according to Perdios, was “to attract companies like Royal Caribbean even during the winter months” he said as he presented a short film on the new brand identity of Cypriot tourism.

Harmony of the Seas has 16 decks with 2,747 rooms that can host up to 6,600 passengers and 2,300 staff. There is also a theatre with 1,400 seats, an ice rink, four swimming pools, ten hot tubs, a water slide, a golf and basketball court, a carousel, a shopping mall and a nature trail. It also features the robot-helmed Bionic Bar for drink preparation.

The cruise ship is currently receiving services from the port in Limassol as it prepares to start on August 15 its cruises in Barcelona, Spain and other Mediterranean destinations.

Jewel of the Seas has 13 decks and can accommodate up to 2,702 passengers in its 1,097 cabins. It has a waterpark, a 1,250-seat theatre, a large casino, nine-hole miniature golf course, a rock climbing wall, several restaurants, bars and shops as well as a gym.

TGIF: how to make a great Whiskey Sour