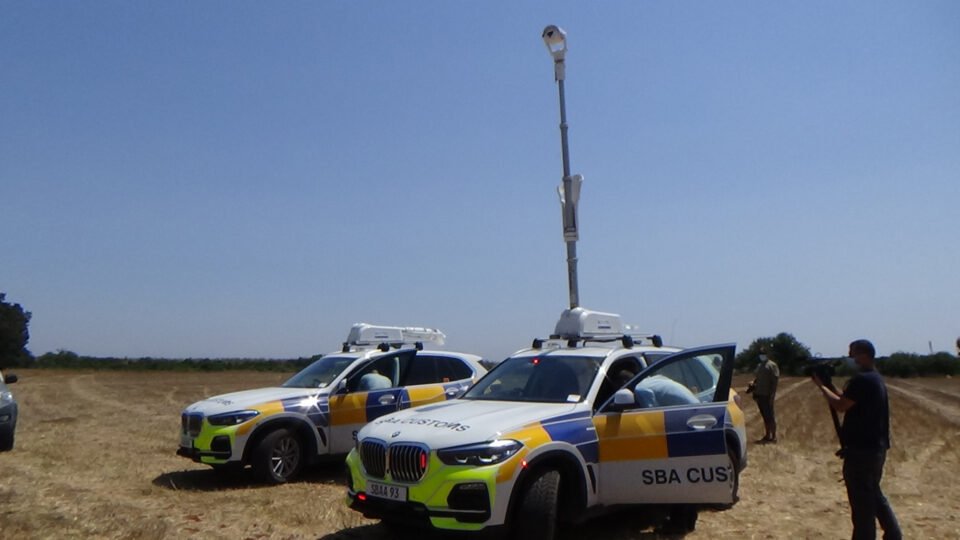 Bases have invested heavily in staff and equipment

Thermal cameras, 24 new personnel and around-the-clock patrols are the most visible results of a recent spending spree at the British bases – aimed at detecting and deterring the smuggling of goods and accurately recording migrant entries into the sovereign territory.

The Cyprus Mail was invited to witness the heavy investment in action.

Chances are that if you’re out and about at the Dhekelia base you’ll come across British patrol cars fitted with what looks like the most sophisticated speeding equipment ever seen.

But they’re not there to catch speeding farmers, beachgoers or day-trippers to the fish&chip shops in the area.

The bases’ commitment to controlling their boundaries is clear. They have recently spent £200,000 alone on four 4×4 vehicles – two fitted with thermal imaging cameras – while the customs and immigration office has received a 50 per cent staff boost (half Greek Cypriot and half are Turkish Cypriot).

It is also a tacit acknowledgement that the pressure of ‘incursions’ – both human and goods – are likely to remain.

And that pressure has only grown. In 2018 there were six crossings detected with 17 migrants making it through, followed by a spike in 2019 with 33 migrants crossing in 17 cases. The biggest jump was in 2020 with 67 people making the journey in nine crossings. So far, in the first half of 2021, nine incidents have led to 25 people being encountered.

There is a caveat, however. Increased patrols inevitably lead to higher detection rates, along with the peculiarities of the pandemic.

But who is making the perilous journey and why is it of concern to the British bases?

Customs and Immigration chief Adam Chatfield, whom we met at the Pergamos crossing point, told the newspaper that nine out of ten migrants that they encounter and subsequently debrief are Syrians.

“We debrief the migrants to make sure they are not a threat to the security of the bases and to Cyprus as well… to make sure that we haven’t got people in there who are not legitimate asylum seekers who could potentially be using that as a cover,” said Chatfield.

He said that many who enter the bases have arrived in the north by boat and even containers – the acute dangers of the latter method were horrifically brought to light when 39 Vietnamese nationals died in the UK.

He said that each person pays around $5,000 to an international network of people smugglers, with the migrants typically being approached in Turkey – often lured by false promises and a near certainty that their formal applications are at a dead-end.

That makes the vast swathes of open land at the Dhekelia base a lucrative source of income for the traffickers. Groups typically cross into the bases from the north at about 10-20 people at a time, the final leg of the route potentially netting the smugglers up to $100,000 per trip.

We met Chatfield and other members of his team at 1pm on a hot Tuesday afternoon at the Pergamos crossing and were promptly whisked off to an area near a disused helipad to see the tech in action.

They demonstrated their use of drones – another tool in their kit – which flew up high above and gained a key vantage point in which to survey the open terrain.

The operators, linked up to the cameras via a screen, get an eagle eye’s view of the base’s boundaries.

Chatfield said that there are always staff and vehicles on reserve, with resources allocated along different points so as not to potentially miss other incidents.

We later drove along ‘The Corridor’, a narrow strip of road connecting the main body of the Dhekelia base to an outcrop, Ayios Nikolaos (Ay Nic) towards Famagusta.

This is where the patrol cars parked and demonstrated their thermal cameras – think long radio antennas – and confused some drivers passing by who thought they were seeing the most elaborate and sophisticated speed check seen across the island.

Chatfield and his team pointed to various locations across our field of view where incursions had taken place, from smugglers to groups of migrants.

But for the bases’ officers on patrol, their vision enhanced with the thermal cameras, the fields can be teeming with life: from hares and other wildlife, to even horses.

Chatfield took us to a point where a vehicle had recently risked the journey across, the disturbed earth and flattened plants still visible. It would have been a smuggling operation – likely tobacco or counterfeit goods – we are told, as migrants are always on foot.

Other smuggled items he mentioned was fuel smuggled in from the north and meat from the south.

Up ahead, just a few dozen metres in the distance, a Turkish military vehicle patrolled along the boundary.

One step further, we were told, and they may have taken an interest.

But that’s the nature of the location, a laborious jigsaw of various lines of demarcation – some invisible to the untrained eye. Elsewhere, watchtowers jut out – emblazoned with fluttering flags.

It’s empty out there, but it’s also crowded: Turkish military patrols, the British base of Dhekelia, UN police, the mixed village of Pyla and officials from the Republic.

It’s almost headache inducing, and the peculiarity of the area often makes the cut in videos and articles detailing the “most complex” boundaries in the world.

It may seem to be beside the point but it’s actually crucial to how – and why – migrants make the journey towards the Republic.

Largely ignored during the initial ‘migration crisis’ of 2015-2016, Cyprus has since emerged as a notable route which migrants take in their hopes of entering the EU.

After deals were signed by the EU with Turkey to prevent the flow of migrants into Greece, along with a further tightening of borders and restrictions in Europe – Cyprus has since been put on the map.

For its part, the Republic has claimed that this is a deliberate ploy by Turkey to pressure the government.

“If they [the migrants] claim asylum, there’s a memorandum of understanding that the Republic will consider their claim,” said Chatfield.

Essentially, any migrants who are encountered by British bases’ officers are debriefed within 24-48 hours and are later handed over to the Republic which is responsible for hearing and processing the asylum applications.