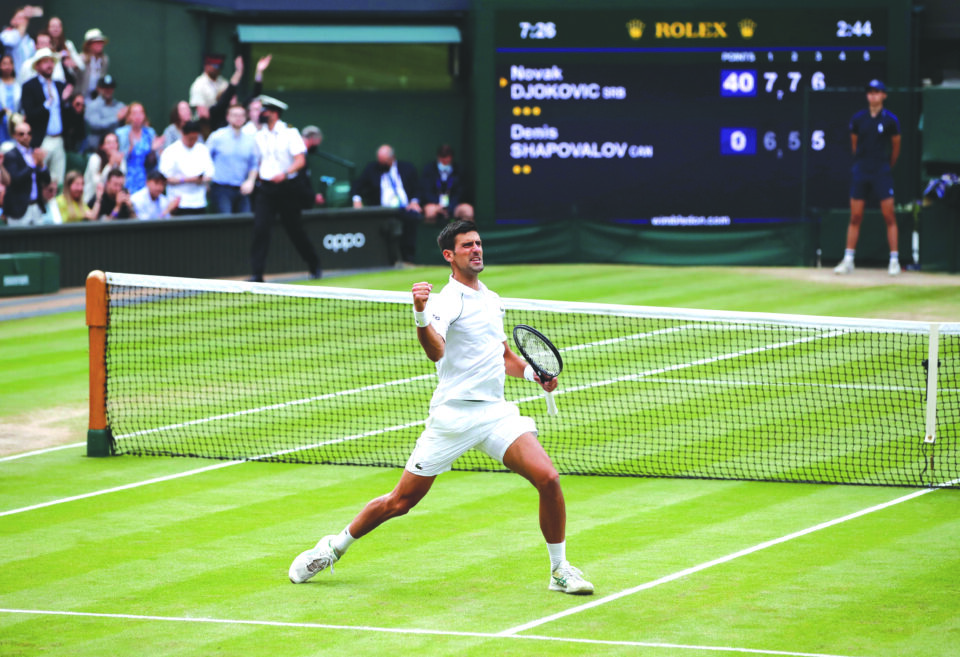 The 34-year-old maintained his imperious progress as he fought off Canadian Denis Shapovalov in three tight sets on Friday to move into his 30th Grand Slam final.

Seventh seed Berrettini will be contesting his first but Djokovic is fully aware that the 25-year-old who bangs down serves at close to 140mph is credible threat to his hopes of drawing level with Roger Federer and Rafa Nadal.

“Anything is possible in the finals,” defending champion Djokovic, who has won five of his previous six Wimbledon finals including in 2018 and 2019, told reporters

“Obviously experience is on my side. But Berrettini has been winning a lot of matches on grass courts this year, winning Queen’s. He’s in great form. He’s serving big, playing big.

“So it’s going to be a very tough match I think for both of us. But I’m looking forward to a great battle.”

Djokovic booked his place in the final with a typically dogmatic performance against Shapovalov who, in his first Grand Slam semi-final, often outshone his illustrious opponent but faltered at critical moments.

The world number one made only 15 unforced errors and managed to fend off 10 of the 11 break points he faced in a victory that was as just as tight as the 7-6(3) 7-5 7-5 scoreline suggested.

“It was not straightforward match, even though it was a straight-set victory,” said Djokovic, who is unbeaten at Wimbledon since a quarter-final exit in 2017 when he retired hurt against Tomas Berdych. “It was very close.

“He was the better player I think for the first couple sets. He had a lot of opportunities and just didn’t manage to close it out when he needed to. In important moments I think I probably held my nerves better than he did and just make him play an extra shot, make him do an unforced error, which was the case.”

Since losing the first set of his first round match against British wildcard Jack Draper, Djokovic has gone on an 18-set roll and is exactly where he imagined he would be.

“That’s why I’m here. That’s why I’m playing. I imagined myself being in a position to fight for another Grand Slam trophy prior to coming to London. I put myself in a very good position,” he said.

England play Italy in a momentous Euro 2020 soccer final a few miles away at Wembley on Sunday evening, but Djokovic believes that Berrettini, despite being Italian, will still get the majority of support from the British crowd as the underdog.

“Hopefully people can also recognise also the importance of this match for me, the history that is on the line,” he said.

“I’m prepared for anything really that is going to happen in terms of the crowd support on Sunday. I’ve had many different experiences throughout my career. I just need to focus on myself and do what I need to do.”

Home or Rome: Cyprus no exception to Euro final frenzy