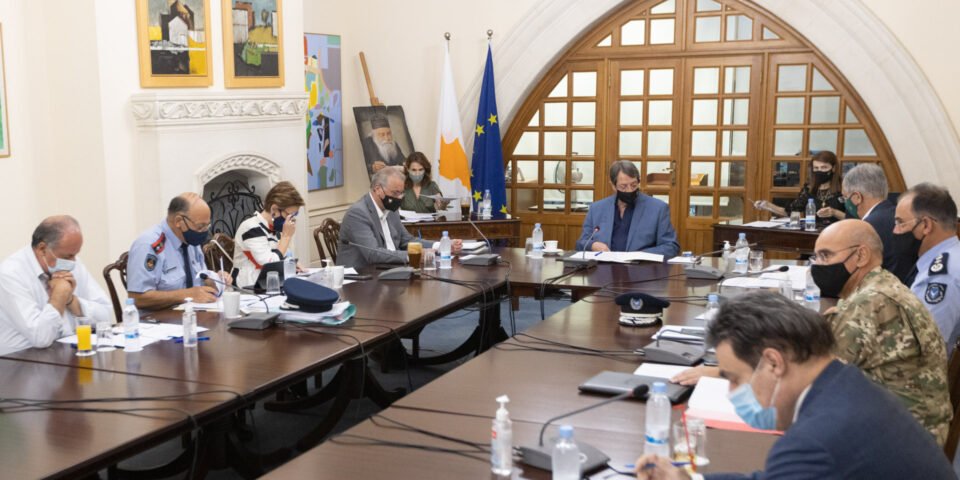 President Anastasiades presided over the meeting on Monday night

President Nicos Anastasiades on Monday gave instructions to state services to proceed immediately with implementing measures to improve the tackling of fires after a meeting with all competent authorities.

According to government spokesman Marios Pelekanos, proposals and suggestions were tabled at the meeting that was convened by the president a few weeks ago, but took place on Monday, aimed at evaluating the measures taken by the state services to deal with fires.

The meeting was attended by all competent ministries, services and departments of the Republic, as well as local government officials.

Pelekanos said after the meeting that “progress has been made in recent years, more specifically from 2016 to date, in dealing with this type of crises.”

Among the measures recorded to strengthen the prevention and response to fires, was improving communication methods between the services, upgrading the involvement of volunteers, strengthening the prevention framework, further use of technology, tightening the legislative framework and more timely commandeering of private vehicles and equipment.

“The President of the Republic gave instructions for immediate concrete measures, avoiding, where possible, time-consuming red tape procedures,” Pelekanos said. He added that Anastasiades also gave instructions to the competent services to submit concrete proposals to the cabinet within 15 days.

Earlier in the day the ministers of interior and agriculture briefed parliament on the recent fires in the Larnaca and Limassol mountainous areas that burned around 55 square kilometres and lead to the death of four people.

The issue was discussed in a joint meeting of the House interior, agriculture and environment committees.

Agriculture Minister Costas Kadis said more firefighting aircraft would be purchased and referenced the national recovery plan which provides for €18m for the purchase of aircraft, fire engines and other vehicles but also drones and staff training.

Interior Minister Nicos Nouris told MPs that they were also looking into reviewing penalties for perpetrators and raised the issue of isolated residences in forest areas, which he said were posing fire hazards.