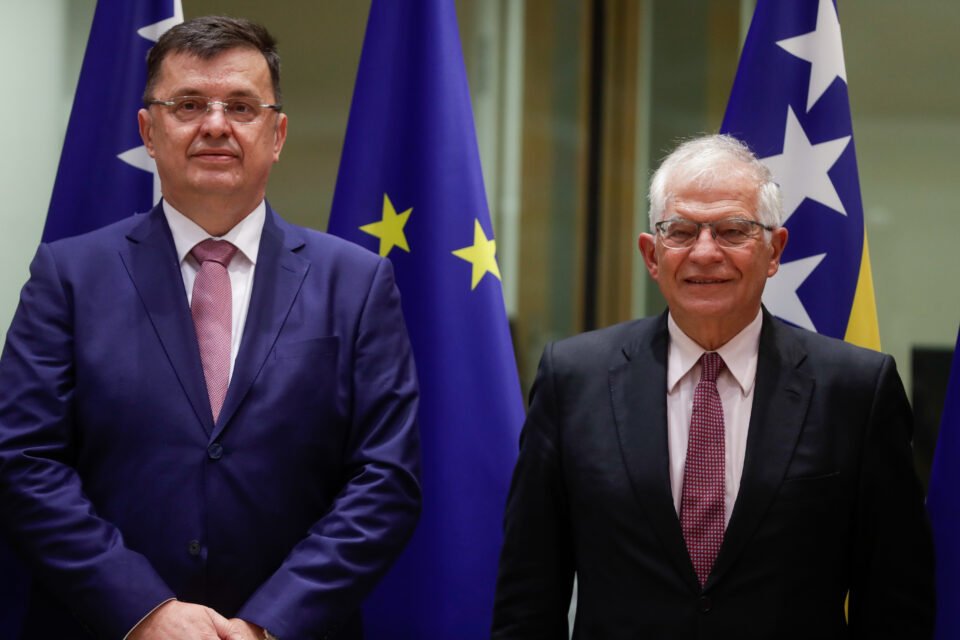 The European Union will try to reassure Bosnians of its readiness to admit their country one day, according to an internal document seen by Reuters, after an unofficial EU diplomatic note raised doubts about Brussels’ commitment.

That note, circulated among EU officials in April, proposed redrawing borders along ethnic lines in the Western Balkans in an attempt to unblock stalled reforms in the region. It caused anxiety in Bosnia, which aspires to join both the EU and NATO.

“The EU reiterates its unequivocal commitment to Bosnia and Herzegovina’s EU perspective as a single, united and sovereign country,” said the 24-page document prepared for Tuesday’s meeting of officials with EU foreign policy chief Josep Borrell.

It also urged a series of difficult reforms before Bosnia can officially become a candidate to start EU membership talks.

The unofficial note was first leaked to Slovenian media and ascribed to Slovenian Prime Minister Janez Jansa, who reportedly had sent it as a proposal on how to deal with the region. Slovenia holds the six-month rotating EU presidency from July 1.

Jansa denied sending the document and accused “fake media” of trying to harm Slovenia’s efforts to help integrate the Western Balkan states into the EU.

The EU has not commented.

The note said the unresolved national issues of Serbs, Croats and Albanians were an obstacle to integrating the region into the EU and said they should be settled by creating a Greater Serbia, a Greater Croatia and a Greater Albania.

In a further reassurance to Bosnia, the EU on Tuesday will call for electoral reform along the lines of the 1995 Dayton Peace Agreement that ended the 1992-1995 war and which sets out equal rights for Bosnia’s three constituent peoples – Bosniaks (Bosnian Muslims), Croats and Serbs.

Last month NATO also supported Bosnia’s “Euro-Atlantic aspirations” and urged political, economic and other reforms under the Dayton accord.

Inquiry finds that abattoir gamed loopholes in the system