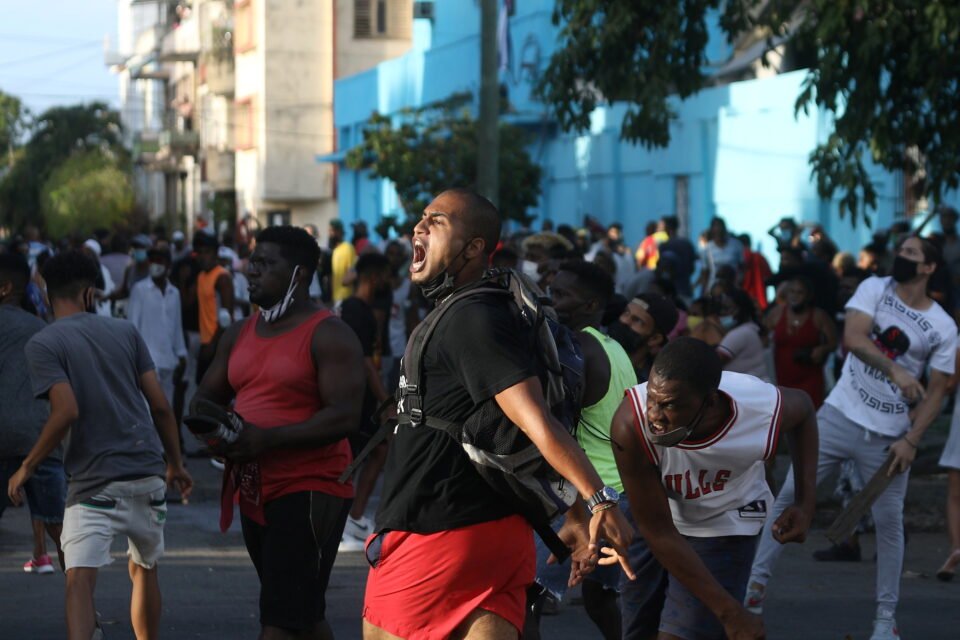 Protests against the government in Havana, Cuba July 11, 2021. REUTERS/Alexandre Meneghini

Cuba blamed historic protests that took place over the weekend on U.S. “economic asphyxiation” and detained some of the highest profile activists, while the Biden administration said it supported the Cuban people’s right to demonstrate.

The streets of Havana were quiet on Monday, although there was a heavy police presence and the capitol building, where more than a thousand had congregated the day before, was cordoned off. Outages in mobile internet – the only way many Cubans have of accessing the web – were frequent.

Thousands of Cubans joined street protests  from Havana to Santiago on Sunday in the biggest anti-government demonstrations on the Communist-run island in decades. They were protesting against the country’s dire economic crisis and handling of the pandemic, but many went further, calling for an end to communism and chanting “freedom.”

At least 100 protesters, activists, and independent journalists had been detained nationwide since Sunday, according to exiled rights group Cubalex – some at the protests but others as they tried to leave their homes.

“It’s becoming impossible to live here,” said Havana resident Maykel, 21, who declined to give his surname for fear of retaliation. “I don’t know if this can happen again, because at the moment, Havana is militarized.”

“Still, Cubans are losing their fear,” he said.

Others Reuters spoke to said they hoped there would be no more protests, citing fears of violence, and saying they would prefer there to be more dialogue.

The protests erupted amid both Cuba‘s deepest economic crisis since the fall of former ally the Soviet Union and a surge in COVID-19 infections that has pushed some hospitals to the edge of collapse in a country that prides itself on its healthcare system.

The tightening of decades-old U.S. sanctions under former U.S. President Donald Trump and the pandemic have exacerbated shortages of food and medicine, as well as power outages.

In Washington, U.S. President Joe Biden said https://www.reuters.com/world/americas/us-stands-with-cuban-people-call-freedom-relief-pandemic-biden-2021-07-12 the United States stood with the people of Cuba who were “bravely” asserting their right to peaceful protest, while Secretary of State Antony Blinken said Cuban officials should not blame the protests on U.S. sanctions.

“It would be a grievous mistake because it would show that they simply are not hearing the voices and will of the Cuban people,” he told a news briefing.

Some Cuban celebrities who have to date not touched on sensitive political issues publicly came out in support of the protesters.

“Their voices should be heard and their rights to express themselves respected,” said singer-songwriter Cimafunk, whose real name is Erik Rodriguez. “We need to unite and find the path forward together, peacefully.”

In Miami, home to a large community of Cuban Americans, hundreds turned out in Little Havana on Sunday to express solidarity and celebrate what they viewed as the beginning of the end. On Twitter, Miami mayor Francis Suarez implored the United States to “take action.”

Diaz-Canel denounced vandalism that took place during the demonstrations.

“They threw stones at foreign currency shops, they stole items… and at police forces, they turned over cars – a totally vulgar, indecent and delinquent behavior,” he said.

But the president said pro-government supporters had finally restored order, after on Sunday instructing them to fight back and “defend the revolution” – orders that caused consternation among some Cubans.

Amnesty International said it had received with alarm reports of “internet blackouts, arbitrary arrests, excessive use of force – including police firing on demonstrators.” Reuters was unable to independently verify the use of firearms.

Network monitoring company Kentik said it had observed the entire country go offline for less than 30 minutes at around 4pm on Sunday, followed by several hours of intermittent outages.

Internet blockage observatory NetBlocks said there was partial disruption to social media and messaging platforms in Cuba on Monday, “likely to limit the flow of information from Cuba.”

The United Nations said it was monitoring the protests and called for the rights of freedom of expression and peaceful assembly to be respected.

Jose Daniel, the leader of Cuba‘s largest opposition group, the Patriotic Union of Cuba (UNPACU), was arrested as he left home to join the protest in Santiago de Cuba in the east of the country on Sunday. His whereabouts is unknown, UNPACU activist Zaqueo Baez told Reuters.

Luis Manuel Otero Alcantara and Amaury Pacheco, two members of a dissident artists’ collective that has made headlines https://www.reuters.com/world/americas/raised-fist-dangling-handcuffs-snapshot-cuban-dissent-2021-04-09 spearheading a broader protest movement in Cuba in recent years, were arrested on their way to protest in Havana, Pacheco’s partner Iris Ruiz told Reuters. Otero Alcantara was in jail while Pacheco’s whereabouts were unknown.

Another well-known dissident, Coco Farinas, was arrested as he left home on Monday in the central town of Santa Clara, his mother Alicia Fernandez told Reuters.

The Cuban government did not immediately comment on the arrests. Cuba slams dissidents as mercenaries in the pay of the United States and allied with anti-Castro Cuban exiles.

“It feels like a dangerous moment,” Ruiz said by phone, noting her neighborhood had had no mobile data all day. “I’m worried about the kind of reprisals they could take against activists – they have been increasingly plying the theory that we are terrorists lately.”

Julie Chung, Acting Assistant Secretary for the U.S. Department of State’s Bureau of Western Hemisphere Affairs, called for the immediate release of them and others.

Diaz-Canel attacked what he called Washington’s hypocrisy for expressing concern when it was fueling the crisis in Cuba with its trade embargo.

The United States tightened sanctions on Cuba under Trump, including restricting crucial remittances in the middle of the pandemic. Biden vowed during his campaign to ease some of these measures but has yet to do so, with the White House saying it was not among his top priorities.

“Is it not very hypocritical and cynical that you block me… and you want to present yourself as the big savior?” he said.

He said the government had been fighting to keep the economy functioning “in the face of a policy of economic asphyxiation intended to provoke a social uprising.”