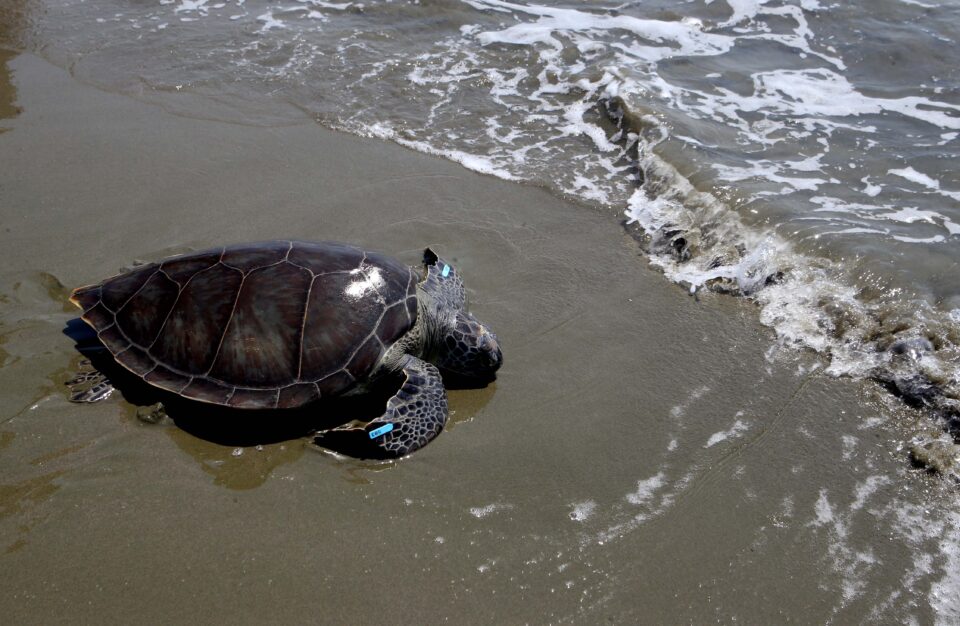 A turtle being released (Christos Theodorides)

Two sea turtles – Androniki and Emma –were released back into the sea on Wednesday after recuperating at the Sea Turtle Rescue Centre of the Fisheries Department where they were taken after they were found injured by members of the public.

Androniki, a Green turtle (Chelonia mydas), and Emma, a Loggerhead turtle (Caretta caretta), were released at the Cyprus Marine Aquaculture Research Centre – which also functions as a Turtle Rescue Centre in Meneou by the Department of Environment, through the LIFE Cyclamen project, together with the LIFE Euroturtles’ project team.

Both turtles had been found injured and needed treatment for several months before they could be released back into the Mediterranean.

Their release took place under the EU-funded LIFE Euroturtles project. The aim of LIFE Euroturtles is to improve the conservation status of the EU populations of the two sea turtle species of the Mediterranean, Caretta caretta and Chelonia mydas.

In addition, the project aims to reduce the impact of anthropogenic threats, particularly fishery-related, by the accidental trapping of turtles in fishing gear.

Actions taking place as part of the LIFE Euroturtles project include the use of drones to detect turtle nests, which are then protected and the distribution of rescue kits to the district offices of the department of fisheries to deal with turtle injuries.

Moreover, a 24-hour sea turtle hotline was introduced to report the sighting of an injured or dead turtle, as well as the ‘eTurtle’ app where members of the public can report turtle sightings, aiming at the better protection of the species.

The programme has also developed a protocol of actions on finding a turtle nest while ghost gears were tracked and removed from the sea, as they pose a serious threat to sea turtles.

The LIFE Euroturtles project involves nine partners from six countries of the Mediterranean. More specifically, the Cypriot beneficiaries are the Department of Fisheries and Marine Research of the Ministry of Agriculture, Rural Development and Environment and the Oceanography Centre of the University of Cyprus.

The LIFE Programme, which is funding the LIFE Euroturtles’ project, is the EU’s funding instrument for the environment and climate action. It contributes to the implementation and development of EU policy and legislation. Beneficiaries of the LIFE Programme are pubic bodies, non-governmental organisations, universities, research centers and institutes, private companies, as well as startups. The National Contact Point for the LIFE Programme in Cyprus is the Department of Environment. To find out more about the LIFE Programme visit www.lifecyclamen.com.cy