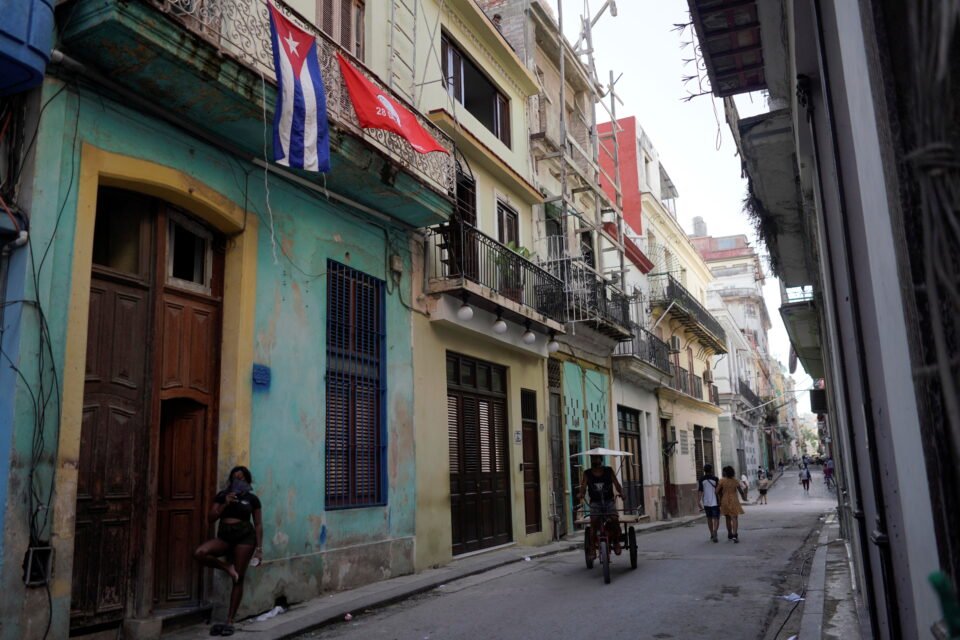 Cuba announced that it was temporarily lifting restrictions on the amount of food and medicine travelers could bring into the country in an apparent small concession to demands by protesters who took to the street last weekend.

Thousands joined a wave of nationwide protests over shortages of basic goods, curbs on civil liberties and the government’s handling of a surge in COVID-19 infections on Sunday, in the most significant unrest in decades in the Communist-run country.

The government blamed the unrest on U.S.-financed “counter-revolutionaries” exploiting hardship caused by the decades-old U.S. trade embargo that Washington tightened in the midst of the pandemic, pushing the Cuban economy to the brink.

Several countries and the United Nations have called on the government to respect citizens’ right to express themselves. Others like Mexico https://www.reuters.com/world/americas/mexico-foreign-minister-says-looking-into-humanitarian-aid-cuba-2021-07-13 have said the best way to help the Cuban people would be for the United States to ease sanctions.

In Cuba, a growing number of high-profile artists nL8N2OQ0DK from salsa band Los Van Van to jazz pianist Chucho Valdes have criticized the authorities’ handling of the unrest, urging them to listen to protesters rather than fight them.

Officials have blamed a campaign on social media under the hashtag #SOSCuba calling for humanitarian aid for fueling the protests, saying it was launched by U.S.-backed mercenaries seeking to destabilize the Communist-run country.

They compared the push to a U.S.-backed effort to send relief to Venezuela in 2019 https://www.reuters.com/world/americas/us-aid-effort-venezuela-was-not-aligned-with-humanitarian-principles-audit-finds-2021-04-30 that ended in a violent standoff on the Colombian border.

Still, one of the campaign’s demands was for the government to lift customs restrictions on food, medicine and hygiene products that are lacking in the country amid its worst economic crisis since the fall of former ally the Soviet Union.

And Prime Minister Manuel Marrero said on Wednesday the government would do precisely that from next Monday, lifting restrictions until the year-end.

“It was a demand made by many travelers and it was necessary to take this decision,” he said on a roundtable on state television, alongside President Miguel Diaz-Canel.

It was not immediately clear how much difference the move would make given that there are very few flights at the moment into the Caribbean island nation which is going through its worst coronavirus outbreak since the start of the pandemic.

Government critic Yoani Sanchez, who runs news website 14ymedio, was quick to tweet that such concessions would not be enough to appease those who had protested on Sunday.

“We do not want crumbs, we want freedom, and we want it nowwwww,” she wrote. “The streets have spoken: we are not afraid.”

Cubans say they have been frustrated by outages in mobile internet and restricted access to social media and messaging platforms since Sunday.

“It’s been a bunch of days that noone has been able to connect,” said Havana resident Andrea Lopez. “My husband is in Mexico and I haven’t been able to speak with him.”

More than 200 people were detained during or following the protests, according to exiled rights group Cubalex, and only a handful have been released so far.

Diaz-Canel said there were three kinds of protesters; counter-revolutionaries, criminals and those with legitimate frustrations. State-run television showed images of a crowd looting a store and another attacking an empty police car.

Interior ministry officials said in a program televised later that some of the detained would be pursued for crimes like incitement to violence, contempt, robbery and damage to public property, which carry lengthy prison sentences.

Yemen has two central banks in conflict, driving up inflation