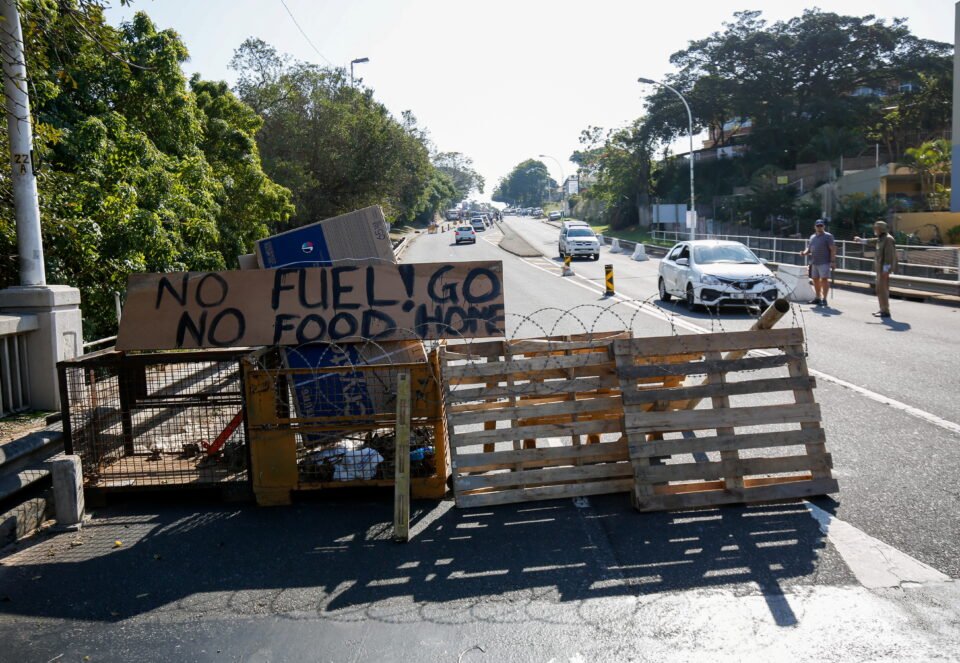 South Africans counted the cost on Thursday of arson and looting that has destroyed hundreds of businesses and killed at least 117 people, as the spasm of violence began to ebb and the government doubled its troop deployment to 10,000.

Pockets of unrest remained, notably in the port city of Durban, where looters pillaged shops and racial tensions flared.

But in the main commercial city Johannesburg, shopkeepers and other residents sifted through debris, cleared up trash and assessed what remained of their ruined enterprises.

The rioting broke out in response to the jailing of ex-President Jacob Zuma last week for his failure to appear at a corruption inquiry.

It swiftly degenerated into looting and destruction, driven by widespread anger over the hardship and inequality that nearly three decades of democracy since the end of apartheid have failed to address.

The military called up all its reservists to bolster army and police who have struggled to contain the unrest.

The acting minister for the office of President Cyril Ramaphosa, Khumbudzo Ntshavheni, said troop numbers had been doubled since Wednesday to 10,000. This was still fewer than the 25,000 Defence Minister Nosiviwe Mapisa-Nqakula said on Wednesday had been requested.

Ntshavheni also said the death toll had risen to 91 deaths in KwaZulu-Natal, Zuma’s home province where his support is greatest, and stood at 26 in Gauteng, which includes Johannesburg, making a total of 117 killed so far. A total of 2,203 arrests had been made.

“We should be worried at the nature of violence that we’ve seen, the nature of criminality,” Foreign Minister Naledi Pandor said in an audio clip shared by her ministry.

“South Africa‘s economy was just beginning to recover from the worst effects of the pandemic, this is going to further reverse our economic growth.”

In some neighbourhoods, vigilante groups have sprung up to protect their property. But there was also evidence the latest chaos may be exacerbating the racial tensions that are a legacy of the apartheid system.

In Durban’s Phoenix neighbourhood, home to many South Africans of Indian descent, authorities reported conflict between them and Black citizens.

“There are ugly scenes playing out on the streets of Phoenix, the racial direction that these unrests are taking must be arrested speedily,” Police Minister Bheki Cele said.

Twenty people have been killed in Phoenix since the start of the violence last week, he later said on television.

An informal slum housing poor Blacks was burned down in the KwaZulu-Natal city of Pietermaritzburg, the mayor for the municipality that includes it said.

The ransacking of stores has left food and other essentials in short supply, and the closure of many petrol stations has also hit transport supply lines.

“It’s heartbreaking … Everything is gone. It’s going to take months to be back up again,” said Ricardo Desousa, manager of a ransacked butcher shop in Soweto’s Bara Mall.

His staff were helping clean up the damage. “They’re not going to get paid,” he said. “There’s no money.”

The destruction of businesses is likely to exacerbate the poverty and desperation that partly fuelled the riots.

Half of South Africans are below the official poverty line and unemployment stood at a record high of 32.6% in the first three months of 2021, due partly to the impact of COVID-19.

Pillaging continued on Thursday in Durban, where a Reuters reporter saw crowds in the Mobeni neighbourhood rolling away trolleys loaded with maize meal and other staples.

Zuma, 79, was sentenced last month for defying an order to give evidence at a judicial inquiry probing high-level graft during his time in office from 2009 to 2018.

He has pleaded not guilty in a separate case on charges including corruption, fraud, racketeering and money laundering, saying he is the victim of a political witch-hunt.

But his downfall has opened up a power struggle within the African National Congress (ANC), in power since the end of apartheid in 1994. Zuma loyalists make up the strongest faction opposed to President Cyril Ramaphosa.

William Gumede, a professor in governance at the University of the Witwatersrand, said the chaos was likely to cost the ANC in lost votes. Local government elections are set for October.

“Black people lost the most … businesses were affected, with mainly Black employees without work,” he said. “So, you can imagine the anger towards the ANC among many former supporters.”

The unrest has also disrupted hospitals struggling to cope with a third wave of COVID-19. They are running out of oxygen and drugs, most of which are imported through Durban. Some vaccination centres have been forced to shut.

Coronavirus: no deaths, new record of 1,152 positives on Thursday (Updated)