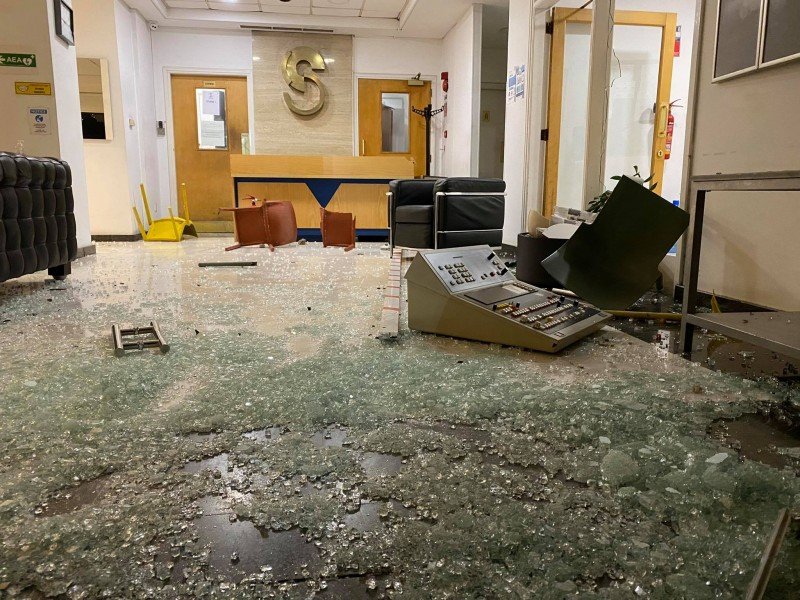 A group of attackers late Sunday broke into the Dias group building that houses Sigma, attacked staff,  set fire to cars in the parking lot and trashed the offices.

The incident happened around 9.30pm. Photos on the SigmaLive website showed the extent of the damage.

The group came from the ranks of the protesters who were outside the presidential palace on Sunday evening demonstrating against the SafePass.

Phileleftheros published a video of scores of protesters marching by the Dias building, shouting and angry.

“The hooded thugs, after completing their protest at the presidential palace, came here where they caused damage,” a report on SigmaLive said. “Dozens of our colleagues who were working at that time were attacked by the cowardly mob infiltrated our building.”

A Molotov cocktail was thrown at one car, which erupted in flames and was destroyed.

It also emerged later that clashes had taken place outside the palace between protesters and police after the main event was drawing to a close.

According to SigmaLive, the chief of police and the justice minister Stefi Drakou arrived at the scene around 11.20pm.

“What we saw when entering your station shows a barbarism and looting by the protesters. Our mission was to police and guard the event at the presidential palace. Some of the protesters remained in the Presidential Palace and others left,” said Police Chief Stelios Papatheodorou.

Asked if they had information about episodes, he said they did not, adding that the number of protesters was very large. Asked if police had had a plan for the demo, he said they had but had no information that the demonstrators would head for the Dias building.

“As the police, we are investigating the incident that took place outside the Presidential Palace. Four arrests were made. We have six police officers at the hospital. Testimonies will be evaluated both for the attack on  Sigma and at the presidential palace,” the chief said.

The incident was widely condemned by politicians, parties and other members of the media.

“The attack on Sigma is a blow to democracy and the rule of law, which is not tolerated,” President Nicos Anastasiades tweeted. “The state will respond to those who ignore the laws. The health, safety of our citizens and our democracy will not be left in the hands of irresponsible citizens,” he added.

In an official statement later, Anastasiades said lives were threatened and property destroyed.

“Above all, however, the marginal elements thought that they would blackmail our Republic,” he said.

“The state is not threatened or blackmailed by anyone, let alone individuals, who, citing irrational conspiracy theories, try to lead the country to the Middle Ages. The state will respond strictly to those who ignore the laws. The health, the safety of the citizens and our democracy will not be left in the hands of angry and irresponsible [email protected]

Deputy government spokesperson,  Niovi Parisinou in a brief statement just before 11pm condemned the attack. “We express our full support to the people at Sigma. The President of the Republic is aware and we will be relentless, orders have been given,” she said.”

House Speaker Annita Demetriou also condemned the attack on Twitter saying: “We have a duty to protect freedom of the press and democracy at all costs”.

“Freedom is a cornerstone of #Democracy. Mobs and thugs have no place,” wrote Interior Minister Nicos Nouris.

“Public expression of dissent is legitimate, violence never! The attack on the Dias Group and on every media is an attack on democracy,” Defence Minister Charalambos Petrides wrote on Twitter.

Socialist Edek said: “It is inconceivable that masked thugs quickly invoke the deprivation of their individual freedom and at the same time cowardly and criminally endanger the lives of workers and try to silence the press and any contrary view.”

The association of publishers said freedom of the press and the protection of its officials is the duty of every democratic state and any attacks of violence against the media affect freedom of expression, pluralism and democracy.

“Things are getting worse. This is the second time in a very short time that this member of the journalistic family has been attacked,” the association said in a statement.

“We call on the competent authorities to immediately investigate the incident in order to find those responsible, in order to bring them to justice and to protect the freedom of the press.”

European Commissioner Stella Kyriakides also weighed in, writing on Twitter that freedom of the press was sacred and non-negotiable in the European family. “The fight against the Covid-9 pandemic must be waged together, always based on science,” she added.

In 2010 then Sigma boss Andis Hadjicostis was gunned down on January 11 that year just after arriving home around 9pm in the Engomi neighborhood of Nicosia. He was 41. Former Sigma presenter Elena Skordelli, her brother Tasos Krasopoulis, Andreas Gregoriou and Grigoris Xenofontos were convicted in the killing.

A first step into space